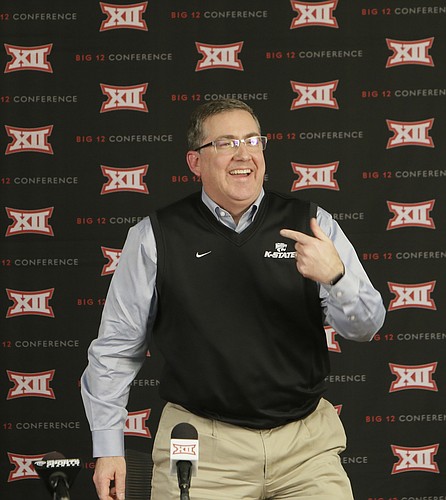 One old sports curse finally perished Wednesday night, a few hours after a newer one mushroomed. First, a word on the curse that died a stormy death in Cleveland.

William "Billy Goat" Sianis, owner of the Billy Goat Tavern in Chicago, purchased two tickets to the 1945 World Series. His second ticket was for his billy goat, Murphy. The goat was denied admission and when Sianis pleaded with Cubs owner P.K. Wrigley for an explanation, Wrigley said, "Because the goat stinks." Legend has it that Sianis was so fumed at Wrigley that he put a curse on the Cubs and said they never would win a World Series so long as the goat was denied admission.

The curse finally died. Although extra innings and a rain delay extended it for a while, the Cubs finally won their first World Series since 1908.

Cue the scary recordings if you have any left over from Halloween.

Here's what happened: Kirk Schulz, president at Kansas State from 2009 to March, 2016, enjoyed sports and the spotlight, so when the Wildcats advanced to the 2011 Sweet 16 in the NCAA volleyball tournament, the prez could not resist gloating. He Tweeted a photograph of the Sweet 16 banner that was unfurled the following season and he typed a message along the lines of, "The only school in the state of Kansas that has one of these."

Since the Tweet that flew off the fingers of Schulz, now the head honcho at Washington State, Kansas has defeated Kansas State in all five trips to Manhattan and has enjoyed its most successful stretch ever. Since the Tweet created the Curse of the Kirky Gloat, Kansas has been to four NCAA tournaments, a Sweet 16 and a Final Four. Kansas State has made it to three NCAA tournaments without advancing past the first round.

It has to be the curse's fault because as was illustrated again Wednesday night inside Ahearn Field House, the Wildcats have outstanding fan support with students doing everything they can to distract the visitor without getting low-class about it. And the well-coached volleyball team is loaded with scrappy, smart, powerful players. Has to be the curse. What else could it be, but the Curse of the Kirky Gloat?

Interestingly, the urban dictionary defines the word, "kirky," as "god of lightweight."

Schulz, no doubt, accomplished many positive things during his tenure in Manhattan, but the Tweet that created the curse was a lightweight move all the way. Will it lead to a 108-year drought? Doubtful, but five years are down with only 103 to go.

Wonder why they use Ahearn for VB but not BB. It holds only 300 less than Bramlage.

Love it! This is what journalism is supposed to be. Between articles such as this and "Say Something Nice..." I am forgetting the list of problems I had about the sports group at LJW. By the way, I really liked the "Rolling Along column by Hartsock. Where did they go? And could we have more?