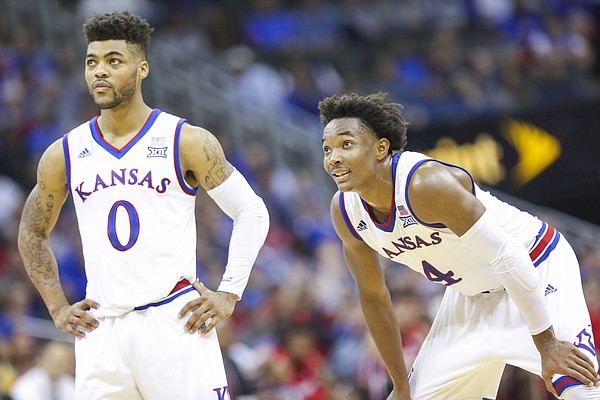 Kansas guard Frank Mason III (0) and Kansas guard Devonte' Graham (4) watch a free throw during the second half, Tuesday, Nov. 22, 2016 during the championship game of the CBE Classic at Sprint Center. by Nick Krug

It sometimes can take quite a while for Kansas basketball players to earn the trust of their demanding coach, Bill Self.

That’s what made something Self said Monday afternoon so interesting when asked how much importance he puts on the first play of the game.

“Not much,” Self said, “although probably for the last 10 years we’ve scripted the first five plays every game, until this year. We haven’t scripted really this year much at all. We script the first play, obviously, but after that we really haven’t scripted much.”

Interesting. Why the change?

“I’ve found the best way to play with guys that we presently have is to let them play, not to try to tell them how to play,” Self said. “I think that’s worked out better for us and maybe save the scripted plays for an ATO (after timeout).”

Self is the Larry Brown of his era in turning ATO’s into points.

His backing off on scripting in general says a lot. First, I think it says he trusts his guards, which makes sense since senior Frank Mason and junior Devonte Graham are so experienced and such smart players.

It also might say that he what he trusts most about them and fellow perimeter player freshman Josh Jackson is that they will play with unbridled aggressiveness. Scripting too much can lead to too much thinking, which can temper aggressiveness.

Graham, Jackson and Mason put so much pressure on teams at both ends and they seem to enjoy playing together to such an extent that they feed off of each other and fuel each other’s attacking style.

The trio is terrific at collapsing defenses with strong drives to the hoop and nearly as good at collapsing offenses with Mason and especially Graham pressuring the ball and Jackson sniping in the passing lanes better than any Kansas player since Mario Chalmers.

It really is quite a compliment to the players that Self has minimized scripting plays. So for the starting perimeter trio has made the coach look smart for doing so.

It appears that the high-low passing into the post play might not be the best offense maybe better to leave space for driving to the rim by the guards. I'm wondering if Mason with the ball decides what to do (like Westbrook at OKC) might be the best attack. Remember the last shot at the Duke game. I realize against smaller players the plays to the post creates dunks and easy buckets. But when conference comes around that may not work as well. When coach talks about small play realize that two of those are 6'8" tall. I'm sure Mason would find plays for Jackson and the others.