Kansas open to recruiting another quarterback in this class 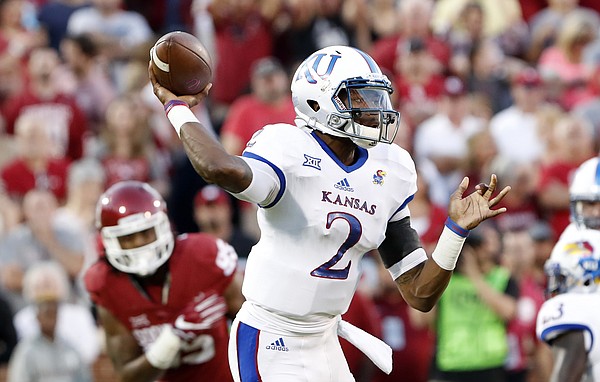 Kansas football coach David Beaty seems to remember everything he ever has heard from head coaches who have engineered successful rebuilding projects. He shared one of those pointers Tuesday.

"He talked a lot about how he wants to make each room a little bit better each year," Beaty said.

Even the quarterback room?

"We'll look at anything and everything to make our rooms better, including quarterback," Beaty said.

Beaty went into the season figuring that red-shirting quarterback Tyriek Starks was all the insurance the team needs at quarterback. Coaches always have to keep an open mind to recruiting needs changing and the quarterback spot again has left much lacking. There is no guarantee Starks will be ready to take over next fall and it's always wise to have insurance against injuries.

Well, if he can 12 of them on the roster, then next year he can start a different one every game.

I honestly don't know what to say. Well. OK.. How about this? If it is a 4 or 5 star QB and they want to come to KU because they already love the school, then by all means. If you have to be distracted using time and energy on a 3 star or below who isn't willing to consider other positions if QB doesn't work out, forget about it.

I'm going to speculate that Montell will be the starting QB next season. He'll be a senior with lots of experience and Starks will begin play having never taken a snap in a real game. Prove me wrong Tyriek.

With 25 scholarships per year, and 11 positions on O & D, you basically need to recruit one player for each position each year. Obviously, it's not quite that simple when players leave early or whatever, but it's pretty close.

It makes it real difficult to play a competitive game without a D1 QB, as if the past umpteen years hasn't proven that in resounding fashion. Carter and Ryan are still both young, so maybe they develop. I'm guessing we may be nearing the point where they have to pull one of those Luke (?) moves and save a game as a replacement.