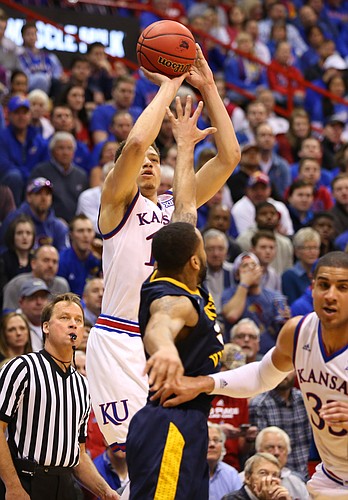 Kansas guard Brannen Greene (14) puts a three over West Virginia guard Jaysean Paige (5) from the wing during the second half, Tuesday, Jan. 9, 2016 at Allen Fieldhouse. by Nick Krug

I agree with colleague Matt Tait's opinion that Brannen Greene made the right decision in leaving Kansas, but disagree that he did the right thing by declaring for the NBA draft and hiring an agent.

Transferring to a school that would have built its offense around his three-point shooting touch, spending two more years in school, improving his ball-handling, earning credits toward a graduate degree and proving he can go two years without a suspension, all would have served to pique the curiosity of NBA talent scouts, maybe even enough for him to earn an invitation to the NBA combine.

As it is, he was left off the guest list, despite having one of the prettier jumpers on the planet. He carries the baggage of never having established himself as a major-minutes player, the baggage of multiple suspensions.

Greene wasn't the right player for Bill Self and Self wasn't the right coach for Greene. But that doesn't mean that with a long look in his mirror and fresh start, he could not have succeeded at another school.

Davidson and Wyoming are two programs that jump to mind as ones Greene could have explored as potential destinations. Davidson's Jack Gibbs averaged 23.5 points per game as a junior, and averaged 18.2 shots, 7.9 from beyond the three-point line. Wyoming's Josh Adams averaged 24.2 points, 16.1 shots and 8.4 three-pointers in his junior season. Greene could have practiced with either player for a year then inherited the available shots.

Those are just two examples of schools that might have been interested. An NBA franchise would be more interested in Greene coming off a stellar senior year. He wasn't going to get that at Kansas, where he had exhausted his chances.

Transferring would have required patience, a quality in short supply among basketball players seeking paychecks.

Tom, do you really think BGreene has the academic chops for Davidson? Wyoming maybe. Marquette probably.

let's not forget that BGreene was a 4.0 student in HS, and he wasn't just taking chump change classes. If he had any academic issues at Kansas, it was because of a lack of discipline not because he couldn't handle the subject matter.

"“This kid is focused academically,” Jeffrey said of his son, who is an A student."

There is no "I" in "team", and he was always a distraction, regardless of his 3pt. shot skills. I wish him well, but the team will be way better off without him.

True, there is no I, but has Greene as showed there is a M E.

Sorry, Tom, not buying it today.

The young man should complete his degree at KU (or anywhere) and prepare for life with out the "sweet jumper".

I wish him well.

After Naadir Tharpe's exit and the revelation that Coach Self may push players out with persuasive means and not be totally forthcoming with the media, I suspect that with the run-ins this season BG was probably told he basically didn't have a future at Kansas. Just a hunch. BG probably didn't want to transfer to sit out a year for an uncertain role with a new team, and so he probably just thought he'd cut to the chase and declare, probably banking on the fact that if he doesn't make it in the NBA he can probably earn a paycheck overseas. If his hopes for the NBA were not high anyway, he really doesn't hurt himself much by declaring. The real story in all of this to me is that BGs defense never developed, and his antics on and off the court--though well documented and perhaps overdocumented--really should not have impeded his skills. After all, offensively he's been phenomenal when not battling health issues of some kind. No reason why his defensive development should lag behind his offensive progress as both would presumably be affected by a bad attitude. It appears to me that coach would have given him the PT if he could play defense. Considering 3 years never saw a major improvement, I think it was not going to get better in a final year so he attempted the jump.

Before everyone goes all negative on TK & BG, it might be good to go back a day and read the article about Jayhawks from previous years still playing NBA games. That's right, the never developed into significant contributions, ended his time with the program on a down note, declared amongst criticism, and went undrafted, but somehow is still making a half million $ (?) and playing for a playoff team regardless of whether he sits or stands during games.

The combine is not the goal.

What's gone unsaid in all of this is the role BG's back and hips played in his decision.

BG may already be playing on borrowed time in regards to his hips and, especially, his back. Ink a contract, whether in the NBA or overseas, and BG at least has some startup money to pursue other endeavors if his hips/back do prevent him from playing basketball.