As our offseason countdown gets closer to the top 10, we take a look at a veteran presence on the Kansas football team’s defense.

Though he didn’t start his college career with the Jayhawks, this linebacker showed in 2015 the potential to accomplish much more on the field this coming season. 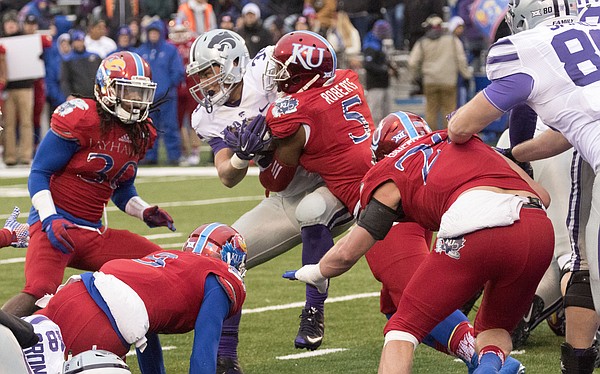 Kansas junior linebacker Marcquis Roberts (5) breaks through the line to bring down Kansas State fullback Winston Dimel behind the line during the annual Sunflower Showdown game Saturday at Memorial Stadium. by John Young

It takes a tremendous ability to concentrate through the pain and absorb the physical pounding that comes with playing college football for any athlete. To do so when playing with the sort of knee pain Marcquis Roberts has through the years requires even greater focus and pain tolerance.

The good news: Roberts’ knees, according to those who would know, feel better than at any point during his time at Kansas after transferring from South Carolina.

Roberts gets after it hard during summer conditioning and arrived early and in great shape.

A 6-foot-1, 223-pound senior from Powder Springs, Ga., Roberts started 11 of 12 games last season, appearing in but not starting one game when hampered by injury. He ranked third on the team with 71 tackles, had 3.5 tackles for loss, recovered two fumbles and in one of the most memorable plays of a mostly forgettable 0-12 season for the team, Roberts returned an interception 83 yards for a touchdown.

His most productive game came against TCU, when he contributed a game-high 12 tackles, 1.5 behind the line of scrimmage, and a quarterback hurry.

Roberts is among the most experienced players on the roster, having started 25 games for power-conference schools.

Roberts missed the first two years of his college career with injuries, sidelined by shoulder surgery in 2011 and knee woes in 2012. He earned a bachelor’s degree in interdisciplinary studies at South Carolina in May, 2015, which enabled him to transfer to Kansas without sitting out a year.

His pre-game routine — dances around the perimeter of the field with headphones on while wearing a backpack — is the most interesting and entertaining on the team.

Is there any position even close to as strong as linebacker on this team’s? I don't see it as even close unfortunately, especially when you consider the depth with Arnick, though the next player up is a complete newb.