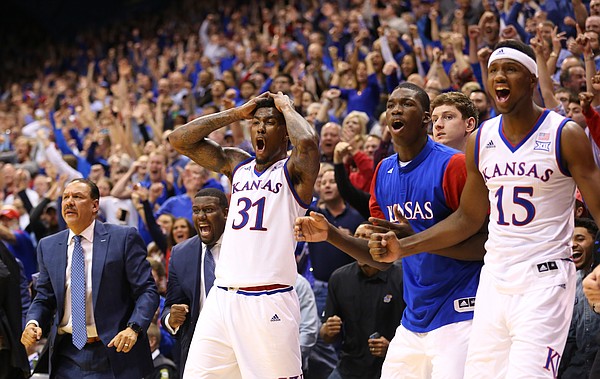 Crowded out of prominence by the drama that unfolded over and over and over again later in a Big Monday night, Jamari Traylor’s terrific stretch at the opening of the second half of a 109-106, triple overtime victory over Oklahoma was not lost on his coach.

“I thought Mari was great,” Kansas coach Bill Self said of the fifth-year senior from Chicago. “Second half, he was about the only one playing start of the second half, and of course Landen (Lucas) down the stretch was awesome.”

Traylor came off the bench in the first half and started the second. It’s a good thing he did because without him using his explosive leaping ability near the hoop, the game could have gotten away from the Jayhawks.

Kansas made just four field goals in the opening 7:19 of the second half and Traylor had two of them. Traylor’s biggest contributions weren’t the points he scored. They never are. He’s a limited offensive player, but has a tendency to make defensive plays that fire up the crowd.

For sheer out-of-nowhere shock value, Traylor had the game’s two most amazing plays. Ninety seconds into the second half, Oklahoma’s Jordan Woodard drove to the hoop for a bucket that would have given the Sooners a nine-point lead. Traylor somehow snatched the shot out of mid-air with two hands and came crashing to the floor, landing on his back, where he stayed for a nervous moment.

A couple of minutes later, the Sooners’ high-flying Khadeem Lattin went in for a dunk that would have given OU a 12-point lead. Traylor had the body control to go up with Lattin, and without touching the would-be dunker, put his hand on the ball to block the shot and snuff the bucket. This time, Traylor landed out of bounds, near the stanchion and Lattin had the harder crash. Incredible play.

A couple of Kanas possessions later, Traylor caught a pass in the lane and decisively drove right, throwing a shot off the glass for a bucket that drew Kansas within seven points. After OU pumped it back to a nine-point lead, Traylor shaved it to seven again, crashing the glass from straight on to put back a Wayne Selden miss.

Traylor’s minutes are down a little this season (14.8 average, compared to 20.4 as a junior and 16.1 as a sophomore), but his spirits seem up. His body language is better and he has been a consistent positive, energetic force.

Tensions ran high in a game that both sides badly wanted.

"Some of those loose balls, diving, sacrificing bodies, that was two teams really, really competing,” Self said.

In other words, the game was right in Traylor's wheelhouse.

Jamari was indeed awesome. The plays were incredible, the effort extraordinary and the energy absolutely essential.

hoping someone post a youtube for that sensational block that crashed Lattin. That is da block of the season so far.

And a replay of Self getting T'd. That was some good stuff!

Only the Chicken Littles question why Adam.

Adam. I'm sure everyone who has common sense has a "worthless" opinion in your world. Perhaps you could apply for Keegan's and Self's jobs... I have the same opinion as they do. And most coaches in college ball, and most other media...

We get it Adam. You hate everyone....and they're all stupid. You and Lee Harvey Oswald. John Hinckley, Ted Kaczynski etc. etc...

Jamari may not have contributed as much as others, but I thought he was definitely the "X-Factor" for KU against OU.

@Adam if you didn't see the play of Landen at the end of game and all three OT's you weren't watching or you don't understand what you were watching. Landen was very good. His rebounds and defense was vital in the Jayhawks' win. I like the way HCBS is playing that 5th spot; whoever is best role player.

Who? Did you notice that Lucas had 5 points in one OT period?

I'll mark you down for yes. You didn't mention who you thought should play.I'm sure your rotation is almost exactly as outlined in another post.

Tom Keegan: Epic Big 12 showdown one for the ages by Tom Keegan KUsports.com
0

Can't sum up your total lack of basketball knowledge any better than that.

Wow. What game did you watch? What planet are you on? Lucas doesn't hang out at the free throw line. And when he sets ball screens they do roll a player with him. You have way less than no clue.

You're just a lost angry kook.

Dude. You have no clue. Stop. Other than a few of your Chicken Little buddies nobody shares your absurd ideas. Be angry by yourself.