Jayhawks appreciate men who drove them on road to Omaha 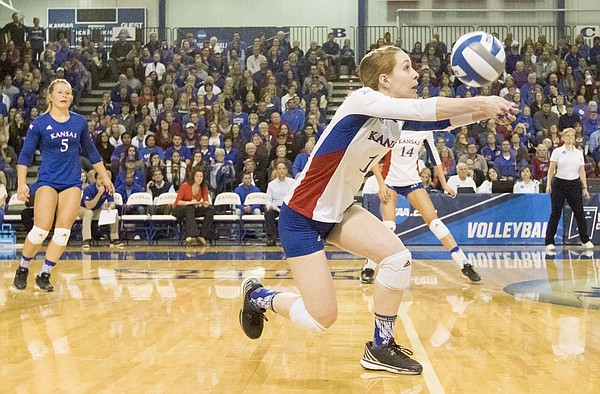 Kansas senior Anna Church (1) keeps the ball in play off a block during Kansas' second round NCAA volleyball tournament match against Missouri on Friday night at the Horejsi Center. The Jayhawks sent the Tigers packing with a three set sweep. by John Young

OMAHA — The road to the Final Four can’t be traveled without bus drivers behind the wheel. The Kansas volleyball team has a way of making fans out of those transporting them.

“My favorite team,” said John Bialek, bus driver for KU’s basketball teams, baseball, softball, soccer, track, cheerleading, swimming and sometimes tennis teams. “They treat me like a king.” Bialek normally is allowed entry to watch the matches, but with tickets so tight at sold-out CenturyLink Center, as of this afternoon, he wasn’t yet sure if he would be able to watch tonight’s 8:30 match vs. Nebraska.

Bialek said he has been driving KU’s teams for “about 12, 13 years. When I first started driving them, I didn’t know the rules real well. After driving them for so many years, I can yell at the referees ‘cuz I know the bad calls when I see them.”

Bialek said he’s made to feel like part of the volleyball team.

“When they have their banquet for senior night, they always invite me and recognize me,” he said.

They don’t just appreciate Bialek, but everyone who drives them, it seems.

“Our bus driver, Jose, did a great job for us,” senior Anna Church said, looking back on their trip to San Diego, the launching pad to the Final Four. “He was giving us motivational speeches. He really emphasized, ‘Play for yourselves. Play for KU. Remember, you’re representing KU and you guys can do this.’ He was just a really great guy."

Shortly after the team arrived at CenturyLink Center for the Nebraska match, Jose sent a text to KU assistant athletic director Jim Marchiony, wishing "the No. 1 volleyball team in the NCAA tournament," luck.

“He gave us a tour of San Diego," Church said of Jose. "He knew everything about the city. He took us to the fish market. There’s a big Navy Ship. I don’t remember what it’s called. The Fish Market’s a restaurant down in the harbor area, and we drove through downtown to get there, so he gave us a tour of downtown.”

Church, who transferred to KU from Saint Louis University for her senior year, couldn’t remember the name of the ship, but Google, the font of all knowledge, knows it: USS Midway.

With Bialek behind the wheel, the volleyball team left Lawrence at 7:30 a.m. Wednesday. Just being in their company put Bialek in a good mood.

“There’s more spotlight on the (men’s) basketball players, more pressure,” Bialek said. “These girls, I’ve been to some of their parents’ houses for dinner and what not. It’s just a lot more fun.

The best of us are those that appreciate and recognize folks others might call "the little people".

I would have given them a tour of San Diego. There's a whole lot more to see than the Fish Market and the USS Midway! A whole lot.

Wouldn't it be the "fount' of all knowledge"? Sort of like short for fountain, where water (knowledge) flows from.

Next we asked whether you would write fount of knowledge or font of knowledge when referring to a wise person. This is another choice where both options seem to make some sense. A fount is an alternative term for fountain which first appears in the 16th century as a back-formation based on the equivalent mount and mountain. A fountain, of course, is the source of a desirable entity (water) and this inspired the figurative use of a fount of knowledge. A font, on the other hand, is the receptacle used for holding water for baptism – which would collocate with the idea of wisdom being imparted. Coincidentally, it also derives from the word fountain, but via the Latin equivalent font-em.

The standard accepted form is fount of knowledge, and this was also the term chosen by the majority of voters in our poll (67%) despite the Oxford English Corpus suggesting that font of knowledge is now the more common form. Evidently our readers have all drunk from the knowledge fountain, and know which version is the longest-standing.