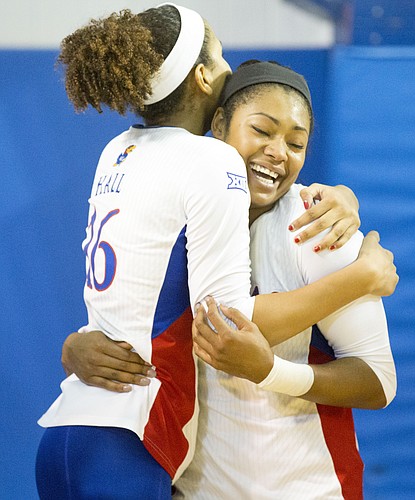 SAN DIEGO — They aren’t the new kids brashly crashing the establishment party anymore. The underdog label no longer fits and the Kansas University volleyball players are just fine with that.

Two Sweet 16 appearances in three years. Host school for first-and-second-round matches in each of the past four years, joining an elite list of six others who can say the same. Athletic, smart, talented volleyball players so well suited for their roles. A 28-2 record with both losses coming to Texas. A 10-2 record against teams that made the NCAA tournament. An attention-grabbing .311 team hitting percentage.

That’s not the resume of an underdog. More like a list of accomplishments by a team befitting an Elite Eight appearance, which is what Kansas will make if it defeats Loyola Marymount today (7:30 p.m. Central in Jenny Craig Pavilion on the campus of University of San Diego.)

The Kansas coaching staff recruits nationally at an elite level and polishes the talent with aggressive, smart mental, physical and technique training.

Sure Kansas draws a tough opponent in Loyola Marymount University tonight, but not as tough as LMU draws.

If Las Vegas offered betting lines on volleyball, Kansas would be favored, even though LMU (24-8) is coming off a sweep of Stanford and has gone 15-2 after a shaky start. After all, who’s to say Kansas, the No. 9 seed in the tournament, wouldn’t have swept Stanford, the No. 8. seed.

Nothing about KU’s talent suggests the Jayhawks are anything but legitimate Final Four contenders, even though No. 1 seed USC casts a huge shadow at Jenny Craig Pavilion.

Ainise Havili, Kelsie Payne and Tayler Soucie were named All-Big 12 first-team. Madison Rigdon earned second-team honors. All four return next year, so this is not a temporary elevation of a program destined to fade back into oblivion as quickly as it escaped it.

Kansas can’t sell a long tradition of big-time winning, but in some ways the human factors that draw recruits to the school run even deeper. Listening to Payne talk about her decision to come to KU out of high school from Austin, Texas, made me realize that.

Payne talked about the campus tour she and her parents received from assistant coaches Todd Chamberlain and Laura “Bird” Kuhn.

“We saw everything and met some of the girls and fell in love with all of it,” Payne said. “We met all the administrative people, Scooter (Dr. Scott Ward, associate athletic director for academics and career counseling) and everyone and I said I want to be here. These are people I want to be around. I feel everyone here is just good friends with each other and it’s all relaxed. Down-to-earth people.”

She isn't the first KU athlete I have interviewed who mentioned the impression Ward made during a recruiting visit. His down-to-earth vibe and commitment to helping them down a path toward a degree resonates with recruits and parents. Athletes with similarly humble personalities like the idea he'll be watching over them in a friendly, subtly relentless way.

This group is a grounded one and the players are such close friends that they feel comfortable being blunt when needed. They revel in teammates' successes, so intangibles do play a role. So do very loud tangibles.

Senior Tiana "Dock" Dockery, the only player in Kansas history to participate in four NCAA tournaments, said this is the most athletic team for which she has competed.

“We found that out during the spring,” Dockery said. “We have a fitness test and we blew it out of the water."

The strength of the team starts with the quick reflexes, great leaping ability and strong hand-eye coordination, but blossoms well beyond that.

“Couple that with good volleyball players, too,” 18th-year head coach Ray Bechard said. “Their volleyball IQ is high and they enjoy playing with each other. They really do enjoy competing together, so it’s been a competitive chemistry, too, I think, that has allowed us to create a good season.”

A very good season that very well could end late Saturday night against a loaded USC squad, but something tells me it won’t end tonight.