Kansas drops to No. 13 in Associated Press college basketball poll 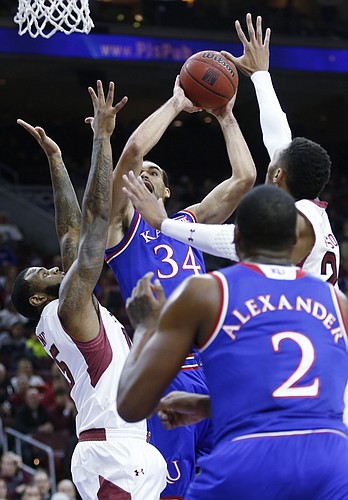 Kansas forward Perry Ellis (34) tries to power his way to the goal past Temple defenders against the Owls Monday at the Wells Fargo Center in Philadelphia, PA.

In the wake of a 77-52 road loss to Temple, Kansas dropped from 10th to 13th in the Associated Press college basketball poll released Monday. Six of the 10 Big 12 schools are ranked in the top 25, with Kansas State, Oklahoma State, TCU and Texas Tech being the lone exceptions. TCU remained undefeated but dropped from 25th to first among others receiving votes. Georgetown's overtime victory against Indiana vaulted the Hoyas past the Horned Frogs and into the No. 25 slot.

The top 25 teams in the AP poll, with first-place votes in parentheses, records through Nov. 16, total points based on 25 points for a first-place vote through one point for a 25th-place vote and last week's ranking:

1 - Kentucky: Defense doesn’t hit slumps to the extent offense does, one reason to believe John Calipari’s team loaded with nine McDonald’s All-Americans can run the table. Backed by the home crowd, Louisville managed just one assist and shot just .259 in an eight-point loss to the Wildcats.

2 - Duke: Michigan State, Wisconsin and Connecticut all lost to the Blue Devils by 10 points, the smallest margins of victory for undefeated Duke. Freshman point guard Tyus Jones has averaged 20 points, four rebounds, 3.8 assists and shot .593 in those three games. His averages in the other seven games: 7.0 points, 3.0 rebounds, 6.0 assists and .351 shooting. Those numbers suggest that the more Jones shoots, the better he shoots. It also suggests that he only shoots a lot when he senses his team needs another scorer. In short, he has a perfect point-guard mentality and plays well in the clutch.

3 - Virginia: The Cavaliers have allowed more than 57 points in a game once, in a 76-65 victory against Maryland, which shot 40 percent from the field in the loss.

4 - Wisconsin: The Badgers played two games and won both, at California and at home vs. Buffalo, by a 68-56 score. The Buffalo victory came on the one-month anniversary of a 69-56 victory vs. Oklahoma. The Badgers are nothing if not consistent.

5 - Louisville: Coaches named Pitino are 22-3. Father Rick is 11-1 and son Richard is 11-2 with Minnesota and one of his losses came to his father.

6 - Arizona: Not many schools can hang with Sean Miller’s team in the paint, but UNLV was able to pull off the four-point upset by dominating the boards, 46-33. Vegas sophomore Christian Wood (24 points, 10 rebounds) produced one of his eight double-doubles. Rebels freshman Goodluck Okonoboh of Woburn, Mass., had nine rebounds, compared to three for Arizona center Kaleb Tarczewski. With a first name like that, Okonoboh was destined to make his way to Las Vegas eventually.

9 - Maryland: Terps went 6-1 without senior forward Dez Wells (15.2 points per game). Now that he’s back, Terps are even deeper, better.

10 - Texas: Center Cameron Ridley, not the player he was last season as a sophomore, had another lackluster performance in overtime home loss to Stanford. He blocked four shots in 17 minutes, but contributed just six points and three rebounds.

13 - North Carolina: Coach Roy Williams was nice enough to schedule a home-and-home with UAB, coached by his former Kansas sharp-shooter Jerod Haase, who thanked him last December with a big upset victory. Williams paid him back Saturday with an 89-58 rout in Chapel Hill.

15 - St. John’s: Fortunately, Nigerian center Chris Obekpa’s retro fashion statement has not triggered a national trend. Obekpa wears short shorts that call to mind a bygone era. Actually, he has said the decision to go short is not fashion-based. He said he wears short shorts because when the long ones become sweaty, they grow heavy.

16 - Oklahoma: Sooners set an NCAA-record with 39 consecutive points in 85-51 rout Monday of Weber State. The run gave Oklahoma a 49-4 lead late in the first half.

18 - Wichita State: In a 60-54 loss to George Washington in the title game of the Diamond Head Classic in Honolulu, Shockers guard Fred Van Vleet and Ron Baker combined to make 8 of 27 field goals, 4 of 13 threes.

19 - Notre Dame: Only loss for Fighting Irish came by one point to Providence in November. That’s impressive, even if ND’s schedule has not been.

20 - West Virginia: Big 12 preseason Player of the Year Juwan Staten heating up after a statistically so-so start to the season. Had 24 points vs. North Carolina State and followed it up with a 17-point, 10-rebound effort against Wofford.

21 - Washington: Home game, up 16 points against Stony Brook. Yogi Berra, who knows it ain’t over until it’s over, might have been the only one still watching. The Seawolves, who had lost six times, including to Hofstra and Canisius, came back to win Sunday night, 62-57. Stony Brook finished the game on a 17-2 run. Stony Brook, on the north shore of Long Island, competes in the America East Conference and never had a victory that could compare with giving the Huskies their first loss.

22 - Virginia Commonwealth: In three games since edging Northern Iowa in overtime, Rams have won by an average margin of 24 points vs. Belmont, Cincinnati and East Tennessee State.

23 - Baylor: Taurean Prince, a 6-7 junior, leads Bears in scoring (11.4) and three-point percentage (571) but scored just seven points in past two games and made 2 of 11 field goals. Red-shirt freshman Johnathan Motley has picked up the slack, averaging 19 points in Bears last three games.

24 - Northern Iowa: Whatever became of Ali Farokhmanesh? Glad you asked. He played professionally overseas (Switzerland, Austria, Holland) for four seasons and is in his first year as a graduate manager on the staff of Nebraska coach Tim Miles. Teddy Owens, son of former KU coach Ted Owens, is in his second season working for the same staff as director of basketball operations.

25 - TCU: Horned Frogs finished last season on a 19-game losing streak, all against Big 12 schools. They opened this season with 12 consecutive victories, none against Big 12 competition.

After Kentucky's win at Louisville this weekend, it's hard to see anyone else cutting down the nets in Indy this year. BUT anything can happen, especially in March. KU's best shot is to see Kentucky on the other side of the bracket and hope that a miracle team knocks them off. Of course we still have a long ways to go before talking about a making a deep run in the tourney, but in college basketball, it's all about peaking at the right time.

Given what they did to us in November, we really don't have any room to talk.

KJ...Mike's right. UK is the prohibitive favorite to win the National Championship, even without Poythress. In fact, I don't think in my lifetime I've ever witnessed a more heavy favorite than is Kentucky, pains me to say. Sure the unexpected could happen. But it would certainly be unexpected. As far as the Louisville game went, the outcome was never in doubt after the first ten minutes of the game. They completely handled the number 4 team in the country on their floor, offensive lackluster performance notwithstanding.

KJ the voices in your head are not real.

I do not see anything in Mike's post that you can make into the dramatic quote you think it is. He did not say they were invincible, or that they do not play some close games, or that Duke cannot play with them.

That is all you KJ

Any team can be beat, he hopes someone does in the NCAA's. They look like a video game version of a college basketball team however. 10 AA, no one under 6'8, numerous 7 footers, athletic and experienced. They are going to be very tough to beat, they have no weaknesses, and they are driven by the loss in the championship game last year. The only way they lose is if they beat themselves.

We may be ranked 13th, but we dont deserve to be. Kansas has to close the gap between potential and performance. If they did we might be deserving of the current ranking.

I Agree It is a weird year in College basketball though, who knows where we belong, maybe it is due to our schedule.
KY is unique, the loss's of power conference teams to unranked teams, all the loss's this year by top teams have to make it hard to rank teams this year. The teams at the bottom of the top 25 is really a stretch. It has to be hard as a voter to make sense of who to rank and where near the bottom let alone the middle of the rankings.

We are probably getting the benefit of the doubt from voters mostly because of the name on our jersey. In some way I like it because this is the type of thing that infuriates mu/ksu/wsu fans but 13 seems a bit high. A 9-2 record with some quality wins is good on paper but the two blowout losses are hard to reconcile.