A few of us were in the office trying to pick out the photograph that struck the loudest chord with us from Nick Krug’s "Jayhawk Decade" book, a best-of collection of photograph’s from the most successful 10-year run in Kansas basketball history, Bill Self’s first 10 seasons in Lawrence.

So I figured I would take a quick survey of four of the guys who share the sports department’s space in an office building that was transformed by Treanor Architects from an old post office into one of the cooler newspaper offices in the nation.

First, my favorite of the 144-page hard-cover book: 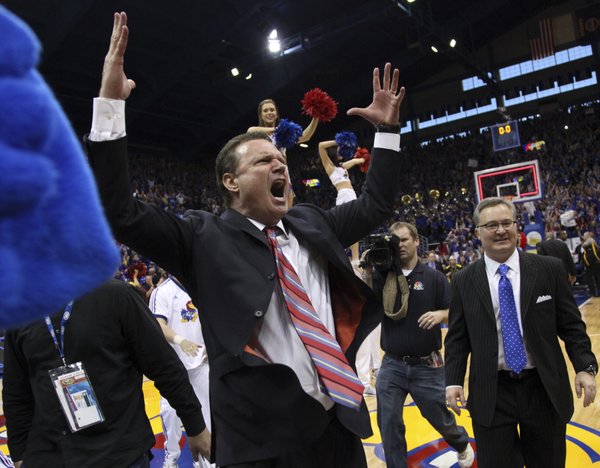 Kansas head coach Bill Self raises up the fieldhouse following the Jayhawks' 87-86 overtime win over Missouri on Saturday, Feb. 25, 2012. by Nick Krug

This emotional moment pops the connection Self shares with the Kansas fan base and shows why he remains in his job instead of caving to the temptation of moving to the NBA.

A seriously whipped-up Self is pictured thanking students in the crowd for lending such wild support during a Tyshawn Taylor-led comeback from an 18-point deficit to victory against chief rival Missouri. No regular-season NBA game could come close to making a coach, his players, and the spectators fly as high as the Jayhawks were flying in the emotional aftermath of this game.

Self’s an intense guy and a fun guy. KU students so loudly shared those qualities with the coach that day, when the strong connection burned deeper than ever. —Tom Keegan 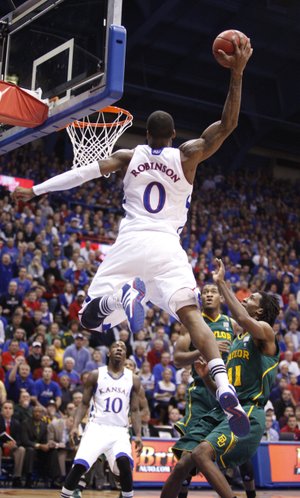 Kansas forward Thomas Robinson gets up for an alley-oop over Baylor defenders Perry Jones III and Anthony Jones (41) during the first half on Monday, Jan. 16, 2012 at Allen Fieldhouse. by Nick Krug

My favorite photo in the book is Nick Krug's classic shot of Thomas Robinson dunking against Baylor. It shows the power of top players in the Bill Self era. The looks on the other players' faces were remarkable as well. —Gary Bedore 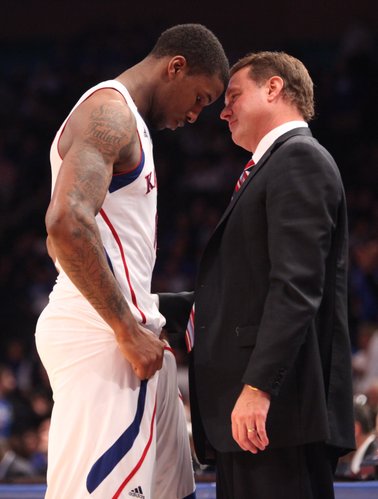 Kansas head coach Bill Self talks with forward Thomas Robinson after Robinson fouled out of the game against Kentucky during the second half on Tuesday, Nov. 15, 2011 at Madison Square Garden in New York. by Nick Krug

My favorite photo in the book features Self and forward Thomas Robinson having a moment after Robinson fouled out during KU’s November loss to Kentucky in New York City. The reason I like this photo above all of the other incredible images in the book is because it captured the essence of both Self and Robinson to perfection. Robinson was such an emotional player and I’m sure it was sometimes tough to reach him because of the passion and tenacity with which he played. In the moment depicted in the picture, a clearly calm and collected Self stands tall right in front of his All-American forward, nearly butting his forehead against Robinson’s, and seems to be going to whatever lengths necessary to calm Robinson down and lift him up at the same time. Self’s ability to do that throughout Robinson’s junior year was a big reason why the Jayhawks finished that season in the national title game in New Orleans. —Matt Tait 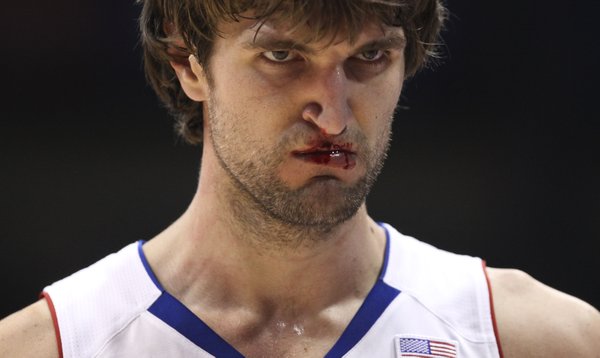 Kansas center Jeff Withey makes his way to the bench with a mouthful of blood following some physical play against Long Beach State during the second half on Tuesday, Dec. 6, 2011 at Allen Fieldhouse. by Nick Krug

Nobody makes Jeff Withey bleed his own blood. This looks like a still from a Rocky movie. Withey just got smashed in the face and Krug’s photo perfectly captures the rage in the big man’s eyes. He’s waiting for the bell to ring, and he can’t wait to clock someone. Or, more likely, deny some player’s layup or dunk at the rim. —Benton Smith 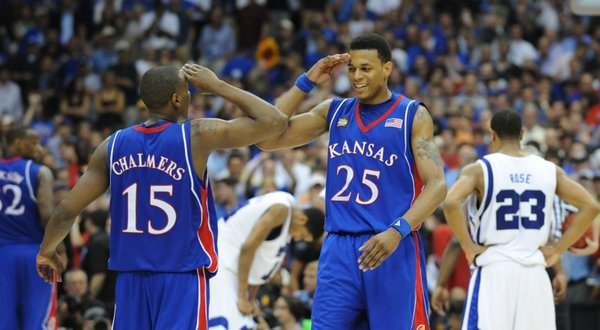 Kansas guard Mario Chalmers and Brandon Rush salute each other in overtime Monday, April 7, 2008 at the Alamodome in San Antonio. by Nick Krug

It’s not a dunk, block or clutch three-pointer. And it’s a much quieter celebration than a Morrii chest bump or a spittle-spraying scream. But, to me, there’s something equally as striking about Chalmers’ and Rush’s salutes during overtime of the 2008 national championship.

It’s a surreal moment, on the verge of a title just minutes after a loss seemed all but inevitable. Chalmers and Rush have swapped emotions with the Memphis players hunched over behind them. The photo captures the prevailing feelings of the night: relief combined with that cool, of-course-we-got-this confidence I associate with the 2007-08 Jayhawks. — Nick Gerik

I know what you're thinking: What's with the shameless plug? Don't blame you for thinking that, but it doesn't happen to be the case. (Remember, it's Nick's book. I save shameless plugs for my own books.) "Jayhawk Decade" will sell out. A limited supply remains. This is just a helpful hint for shoppers stumped as to what to get for a Christmas present for the KU basketball fan in their lives. Order today and it should arrive ahead of Christmas Day. Wait until tomorrow and they might be gone. Click here to order the book. — Tom Keegan

T-Rob was a beast. He's got to be one of the more "mentally tough" players in KU basketball history. We need a guy like that on this year's team.

I with we will be able to see Embiid take the ball out of the air (rebound or pass) and dunk it like TRob used.

I'd love to see a book somewhat like this narrated by each of the Kansas coaches living. Each coach to pick out his favorite photos and comment. Self can cover for Naismith since he knows all about the Topeka YMCA. Owens can step in for Harp to cover the Chamberlain era. The Allen family can sub for Phog.

I plan to buy the book next time in Lawrence and assume it will be on sale at the bookstore in the Union.

Tom, Self isn't "thanking students" in that picture. He's not looking even remotely close to either student section.

"No regular-season NBA game could come close to making a coach, his players, and the spectators fly as high as the Jayhawks were flying in the emotional aftermath of this game."

TK, you take a lot of crap on this site. It seems to be less than I remember from years past. (Maybe it because of the lack of visitors to the site! Ha!). But this above quote is beautiful, and showcases your skills. It so accurately describes the way, the emotion, of that particular game. Good stuff.