Jesse Newell: Welcome back to the GameDay Cram Session, as Kansas is taking on VCU on Sunday afternoon in the Elite Eight in San Antonio, Texas.

Tom, what were your impressions of VCU's Shaka Smart when he took the podium during Saturday's media day? 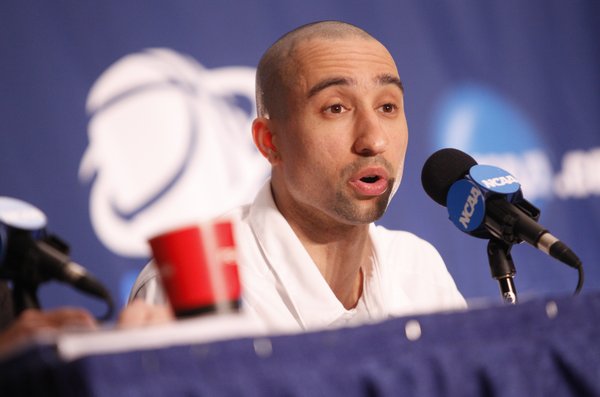 Virginia Commonwealth head coach Shaka Smart talks with media members during a press conference on Saturday, March 26, 2011 at the Alamodome in San Antonio. by Nick Krug

Tom Keegan: I’m going to try really hard to answer this without using a pun. My late friend Mike Penner, who for a while penned his Los Angeles Times column under the name Christine Daniels before switching back to Mike Penner, used to refer to puns as “the lowest form of communication.” So let me just say that if I could sum up Shaka Smart in one word, it would be, “Intelligent.” What a sharp guy. Great communicator. That’s the common thread you come to realize about good college basketball coaches. They are such impressive communicators, which makes sense because they’re obviously great at communicating to their players how to win basketball games. Danny Manning, should he decide to pursue a head-coaching position after the tournament, will have that going for him. He’s a very direct communicator.

JN: I left impressed by Smart as well. He seems down-to-earth and also has come up with creative ways to motivate his team. 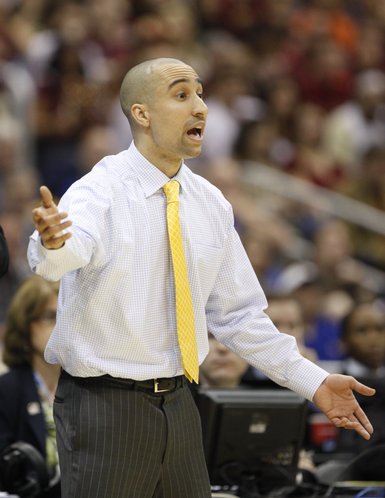 Virginia Commonwealth head coach Shaka Smart gets the attention of his defense during the first half on Friday, March 25, 2011 at the Alamodome in San Antonio. by Nick Krug

Before the Florida State game on Friday, he made up a video showing all the prognosticators picking against his team (including ESPN's Jay Bilas). He also burned a calendar (the month of February) during his March 1 practice to signify to his team that the poor month was over.

Perhaps the best part, though, was when he used a "Dumb and Dumber" reference after talking about KenPom saying that his team only has a 0.9-percent chance of winning the championship.

"So you're saying we have a chance," he said.

He sold me there. Seriously, though, he's a perfect fit for Missouri's coaching opening, and I wouldn't be surprised if this is the first of many matchups for Smart against KU.

Speaking of the Jayhawks, you had a great call last Cram Session by saying Josh Selby would break out and have a good game. Any gut feelings with this one? 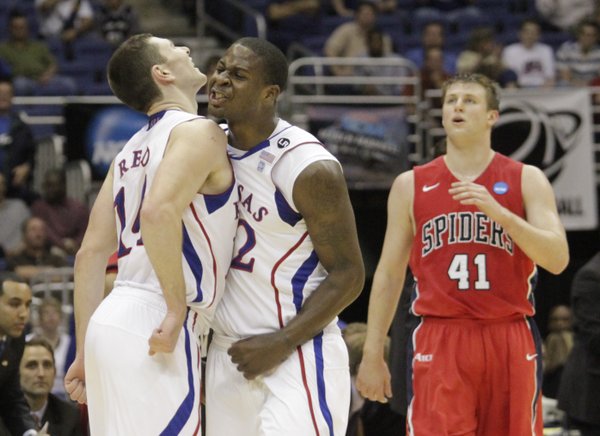 Kansas guards Josh Selby (32) right and Tyrel Reed celebrate a three-pointer during the first half against Richmond on Friday, March 25, 2011 at the Alamodome in San Antonio. by Mike Yoder

TK: Thanks for reminding me of that. Classy move on your part. Nothing as bold as that one, but I do like the twins’ chances of both having huge games. Ditto for Thomas Robinson.

JN: This definitely appears to be a game where KU's frontcourt should have plenty of success. Not only is VCU a poor rebounding team, it also allows opponents to shoot 49 percent from two-point range (47.8 percent is NCAA average).

The Rams are good at taking the ball away (11th nationally in steal percentage) so their best defense against the Morris twins might have to be stealing the ball from the KU guards before they get it to the post.

Other than that, it appears the Rams will most likely have troubles trying to keep the Jayhawks from scoring inside.

All right, Tom, what's your prediction? 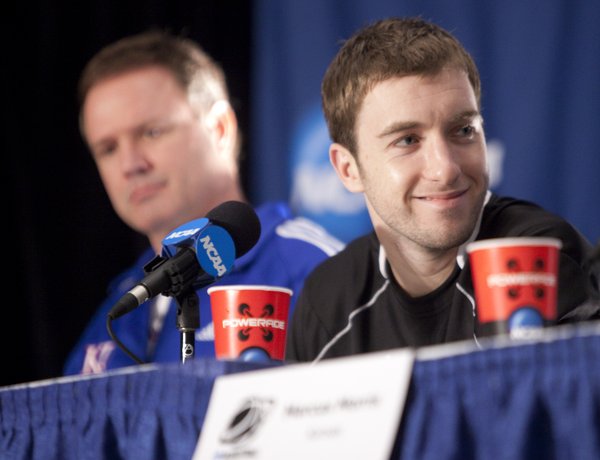 Kansas guard Brady Morningstar smiles during a press conference with his teammates and head coach Bill Self on Saturday, March 26, 2011 at the Alamodome in San Antonio. by Nick Krug

The Rams have had an amazing run, but haven’t played a team of KU’s caliber. I’ll be surprised if this one is close.

JN: I'm going with KU by 15. (Will Shaka Smart or one of his assistant reads this in time to put it up on every VCU locker?)

As everyone knows by now, KenPom.com is my basketball bible, and VCU's rank there (58th) is almost directly between Colorado (55th) and Nebraska (62nd). And that's after winning four straight NCAA Tournament games to boost their position.

The Rams are the reason why we watch sports: To see if the unbelievable can happen. Before the NCAAs, KenPom's projections gave VCU a 1 in 500 chance of reaching the Elite Eight. Remarkably, the Rams still made it. 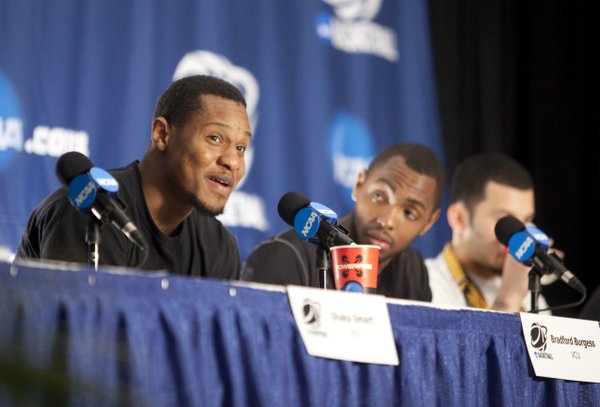 Virginia Commonwealth forward Bradford Burgess answers a question during a press conference on Saturday, March 26, 2011 at the Alamodome in San Antonio. by Nick Krug

I can't sit here and predict another miracle for VCU, though. KU is better in nearly every phase of the game and shouldn't have many problems (or any problems) scoring, especially inside.

I'm with you, Tom. I'll be surprised if this one is close. Then again, that's why we watch sports to begin with.

All right, who's your Hawk to Rock? 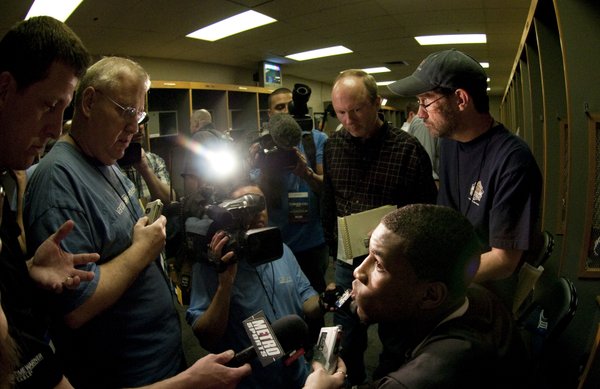 Kansas forward Thomas Robinson talks with media members in the team locker room on Saturday, March 26, 2011 at the Alamodome in San Antonio. by Nick Krug

He is one remarkable rebounder and VCU figures to miss a lot of shots that he’ll get and fire to a guard.

JN: I'll resist the urge to get cute. The can't-miss Hawk to Rock pick in this game is Markieff Morris, so I'll go with him.

VCU is one of the worst 30 defensive rebounding teams in the nation and also doesn't defend the inside well. Not only that, Markieff is coming off a game where he scored just five points on 2-for-8 shooting with six rebounds after getting into foul trouble early against Richmond. That snapped a streak of 11 straight games with double-figure scoring for Markieff.

Give me 22 points, 12 rebounds and three blocks for Markieff.

If KU loses, it will have to be because they defeat themselves. VCU is a decent team, but they haven't played anyone like Kansas. In the tourney, it's been USC (who wouldn't have made a field of 64), Georgetown (depleted by injury), Purdue (playing without one of their backup guards and of course without Hummel), and Florida State (a team with no offense to speak of).

The best teams they played before the tourney were Tennessee and George Mason.

VCU's needed a ton of breaks to get this far. It's up to KU not to give them any more.

Hawks by 22. Everything is doubled up against the Rams for this one. M&M twins in rebounding and scoring, TT takes care of the ball and keeps turnovers at a minimum, while TRob steals every offensive rebound in sight from VCU and scores. KU's guards just need to lob it over the Rams for the easy dunks or drive and toss to the Hawk waiting on the opposite side of the basket for more dunks. If Richmond thought Sherman's march was bad, wait till they see what the Jayhawks do to them during March Madness..

Wow. A Mike Penner reference. That was a sad story about an extrememly confused individual. I wish it would have had a better ending for Mike/Christine.

so you're all saying this ones gonna be a blowout which in reality means its gonna be close....

I think VCU comes out and hits some early shots...3's of course. KU gets down by about 7 or 8 but comes back and takes a 2 pt lead by halftime. KU ratchets up the defense in the 2nd half and controls it like the Illinois game. I'll say KU 76 - VCU 69.

VCU's motto for today - "Houston...we have a problem."

Love the "Dumb and Dumber" clip. Again, like I said on another thread, KU should have lots of success against VCU. However, look at Davidson in '08. Davidson, with Stephon Curry, was a hot team when they met the Hawks. I see VCU just as hot. Like someone said above----the only team that can beat KU is KU----end of story! Good luck, Jayhawks! See you in Houston!!!!!!!!!

VCU does not have a Stephon Curry but I agree that KU's biggest challenge is not playing down to the competition.

I think VCU will run out of gas today. They have played hard and fast during the tournament. Their adrenalin will get used up today. HCBS will put pressure on them from the start with more full court presses and drain their tank.

Bang the post early and often with relentless abandon and let's book the tickets to Houston - GO HAWKS!!!!

Today's Hawk to Rock will be Mr. Reed. I have KU winning...but not by much. Maybe four or five.

Let's not talk anymore about Coach Manning taking a HC position after this tourney. There is no question that he would be great, and has certainly earned a chance, however, I just want him to stay forever. He's a Jayhawk thru and thru, and not only would it be sad to see him go elsewhere, it could also cause a downfall in the KU program especially with the bigs. Stay Danny, we love you more here than anyone else ever could!!

Jayhawks, bring intensity for 40 minutes, we haven't won anything yet. Remain focused, we know you can, just beat VCU guys!!! ROCK CHALK!!!

I don't think Coach Manning will go anywhere. He's happy at KU, his alma-mater, where he is universally beloved. No need for him to go take a HC position anywhere.

And in other news, let's go out there and play hard, smart, and with purpose today! Play 40 minutes of great Kansas basketball and we're Final Four bound!

First Technical by a Jayhawk--Josh Selby

My Hawk to Rock is also Kief .. He has shown he is not the type of player to have two bad games in a row. After his poor game Friday he will be on a mission to make a statement today. I would not get in his way. He not the kind of boy to take no for an answer.... HE WILL ROCK

-One is the loneliest number. KU happy to be alone a top the Final 4 as only #1 seed. -Jayhawks to play Bulldogs in Final Four, can Kansas stop (the) Butler from doing it again? -Houston, we have no problems. KU flies into final 4.

OK thats what I got for now, more for the upcoming week.

Alamo-Home, seems like a perfect fit..... Sweep Virginia. Let's not be arrogant and assume a W yet.....

It could very well be.

A few things to consider today:

If we do that, the headlines should read:

Kansas does the Texas 2 step to Houston, battering the Rams 88 to 71.