Which KU bench players will emerge against Richmond? Plus, predictions for Friday's Sweet 16 matchup

Jesse Newell: Welcome back to the GameDay Cram Session, as Kansas is taking on Richmond on Friday night in the Sweet 16 in San Antonio, Texas. 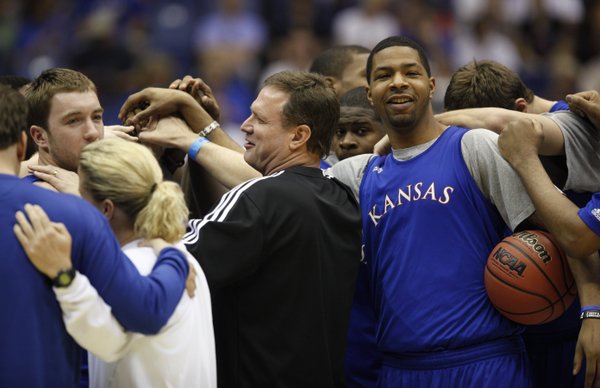 Kansas head coach Bill Self, Marcus Morris and the rest of the Jayhawks come together in a huddle during a day of practices and press conferences at the Alamodome in San Antonio on Thursday, March 24, 2011. by Nick Krug

Tom, what's something you learned about Richmond from the media session Thursday?

Tom Keegan: The Spiders' coach Chris Mooney said that his team tends to get out of sorts when its defense doesn't stop people and that's when they have troubles at the other end. So from a KU point of view, the more aggressive the better, offensively. Or was him saying that a means of trying to draw KU into a Spider web of deception?

JN: Ha. Good question. Mooney did seem like a bright guy, so I wouldn't put anything past him. 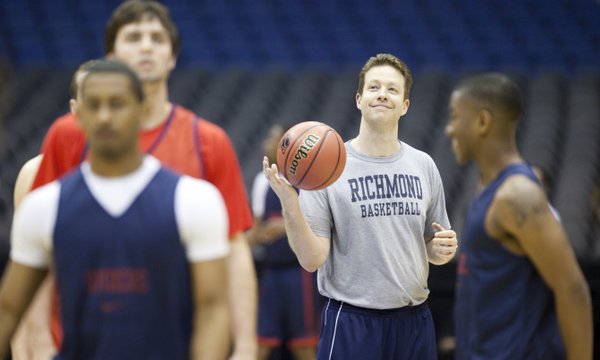 Richmond head coach Chris Mooney flips the ball around as he watches the Spiders run drills during a day of practices and press conferences at the Alamodome in San Antonio on Thursday, March 24, 2011. by Nick Krug

The Richmond coach also said that one of the key matchups in the game would be seeing how KU's Marcus and Markieff Morris performed defensively against his talented big men.

Six-foot-10 senior Justin Harper is a Marcus Morris clone, as he hits jumpers from inside and outside while keeping his turnovers low (in fact, Draft Express has him going 26th overall, just seven spots behind Marcus and three spots behind Markieff).

Meanwhile, 6-9 senior center Dan Geriot oftentimes acts like a point guard in Richmond's Princeton-like offense, as dishes out 23.5 percent of his team's assists during his time on the floor while also making 42.3 percent of his threes.

The Morris twins will be playing against two post players that are just as versatile as they are, and they'll need to be focused in defensively if KU hopes to slow down Richmond's slow-paced, high-efficiency offense. 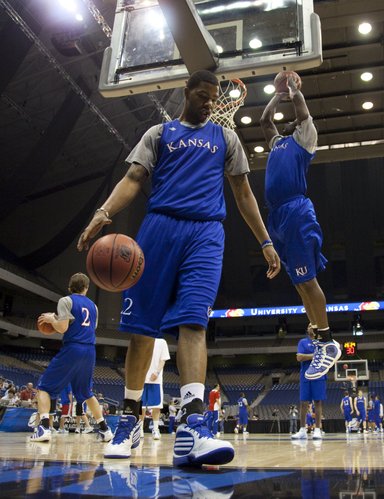 Kansas forward Marcus Morris works through a drill with his teammates during a day of practices and press conferences at the Alamodome in San Antonio on Thursday, March 24, 2011. by Nick Krug

Speaking of KU, Tom, which Jayhawks' bench player do you think could have a big impact during Friday's game?

TK: Thomas Robinson is capable of doing that any game, any time. For some reason, I think Josh Selby will have his best game since coming back from his foot injury. It's now-or-never time for Selby, unless that time came and went in Tulsa. In the 11 games since his return, he's made 4 of 24 three-point shots and is shooting 28 percent overall.

JN: Though he's averaged only 13.5 minutes per game so far in the NCAA Tournament, this matchup looks to be one where Thomas Robinson could thrive. 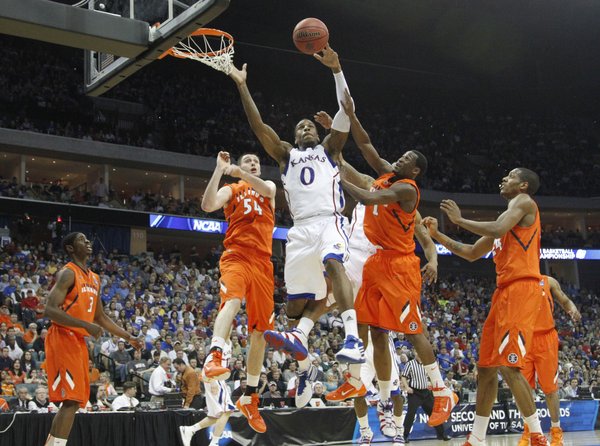 Kansas forward Thomas Robinson battles inside for a rebound with the Illinois defense during the first half on Sunday, March 20, 2011 at the BOK Center in Tulsa. by Nick Krug

Robinson is KU's best offensive rebounder, and he could give the Jayhawks a huge lift if he's able to turn missed shots into easy baskets, much like he did in the second half of KU's regular-season finale against Missouri. 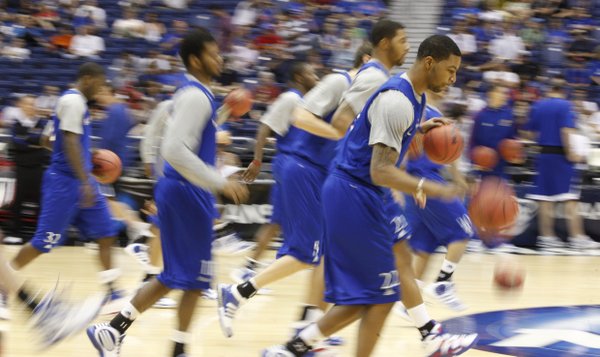 Kansas forward Marcus Morris, front, and the rest of the Jayhawks get warmed up during a day of practices and press conferences at the Alamodome in San Antonio on Thursday, March 24, 2011. by Nick Krug

JN: I'll say KU by 12. I'm convinced this game will come down to rebounding, and the Jayhawks should have the huge edge there. Richmond's slow pace will only be a factor if KU falls behind by a significant margin, and I'm not going to predict that happens.

Marcus Morris tells Richmond players to 'be ready,' says he tries to get in their head by Mike Yoder

The do-it-all junior forward is playing like a man on a mission to get to the Final Four.

JN: Though I mentioned that I think Thomas Robinson will have a big game above, I'm going to break one of my own rules and make Tyshawn Taylor my Hawk to Rock for a second straight game. 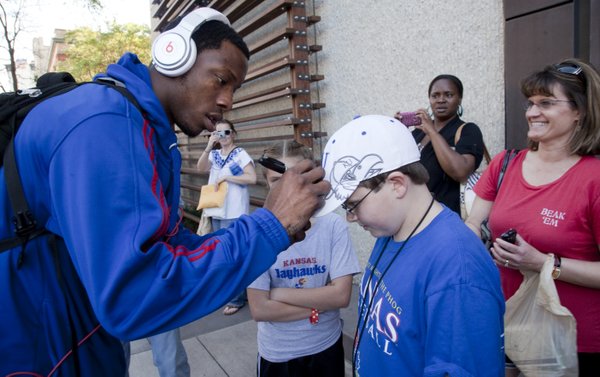 The key to beating a matchup zone like Richmond's is to attack it off the dribble, and Taylor is KU's best at doing that.

The junior guard has been playing his best basketball of the season for KU in the last two weeks, and because a matchup zone shuts down many of the passing lanes, the Jayhawks will rely on Taylor to split defenders off the dribble to create a numbers advantage offensively.

If he's able to do that — without turning it over against a Richmond defense that doesn't force many turnovers — then KU's chances of advancing to the Elite Eight improve dramatically.

they won't be able to hang with us if we can get their bigs into foul trouble early.

The key is holding them to one (contested) shot and turning o-boards into points and trips to the line.

Hawk to Rock-TT, his D will be important and his ability to get into the seams of the match up zone and distributing the ball.

Thanks for the heads up. Good stuff.

I wonder if there is a link to something similar where one of the Richmond sports media folks interviews someone "in the know" about our team’s strengths and weaknesses. If so, that probably would be an interesting read too.

And speaking of Selby. I was watching him shoot around yesterday and noticed something kind of interesting about his shot. Mechanically, he always shot with the same motion. But his ball was either true, or it missed badly. Just thinking back to my glory days and when I missed, it was long or short, but never several feet off either way. I am just thinking it goes to concentration and most likely to confidence. And he usually missed to the left.

I don't like that he has taken to camping out at the three point line. He's got to get some easy points, from the free throw stripe or driving the lane. Once he has some battle scars he should be able to LIGHT IT UP!

But nobody liked it in January when he wasn't finishing and he was driving the lane - the teardrop (or whatever) wasn't going down for him. Perhaps that was the beginning of the trouble. And he seems to have some scars, at least a foot injury... The year started off so good for him, too.

I agree, I was one who felt he was too weak or out of control when he drove the lane. Like Xavier he's got to take on the contact and shoot the free throws. One other thing, and I hope this is not true, he just looks unhappy as if he thinks he may have made the wrong choice with KU. Maybe it's because he is trying so hard to be what HE thinks Self wants him to be instead of just being the guy Self recruited.

Dude, I think he looks unhappy (and I agree he does) because he was a one-and-done at the start of the year and now he is European league at best... It is like his playing as though he doesn't want to get hurt (yet he did) and screw up his NBA millions (which he probably has now). He was just here for the year, and now that is looking like maybe two years. That would probably make a fella unhappy. And then not playing well on top of that...

I just hope it isn't too much of a vodka weekend! I am about to head downtown and start getting ready!

I think that was Tyshawn who you are remembering that nobody liked him bricking all those teardrops, and his staunchest supporters playing the "it created offensive rebounds" card. Really I think the outcry for his shots when driving the lane was pretty minimal.

No doubt, that doomed the Aztecs last night. The 'hawks have been much better shooting their free throws the past month or so.

The ESPN Sweet 16 Friday match-up preview (online) didn't even talk about the KU game, those jokers can cram it.

He's talking about the BIG preview they do, in studio with Pitino, Bilas, etc. They mentioned every Friday match up except ours. They didn't even make note of it. Classic East-coast Sports Pandering Network maneuver, really. Not as surprising as disappointing.

I found it pretty easily earlier today, and just checked and it's still there (have tried posting the link twice and for whatever reason it's not letting me). Been there since 8:02 AM ET

Weird, refreshed twice and it wasn't showing up. Anyway, see the link in the posts above.

Since Richmond is 1-0 against us, it made me wonder how many other teams hold a winning record against KU?

I know most of you aren't college baseball fans, and surely couldn't care less right now but i was shocked to see this on ESPN's must watch this weekend list:

So I'm not saying these are national title contenders, but a handful of teams look pretty ugly now yet could become swans on the main stage of the postseason come the month of June. Don't say I didn't warn you.

Kansas Record: 10-10 Current RPI: 60 Good wins: TCU, Oklahoma State (2) Ugly losses: Eastern Michigan (2) The beautiful swan factor: Despite all the hype of other Big 12 staffs, the Jayhawks have given up just 68 earned runs and issued 66 walks; both are fourth-best in the conference.

My Hawk to Rock this game is Mario Little. With the Spiders concentrating on the twins inside and Reed + 1 outside, during the time Mario is in the game I see him getting more then a few 10' jumpers against the Richmond Zone ( match up or not ). A Zone is a Zone and if we have movement there will be openings at the free-throw line for Little to ROCK.

Thanks for the post, chuckberry, sounds encouraging. It would be nice to see KU baseball get back to the playoffs.

Price has done a great job at KU, we just have come up a little short in being able to turn that final corner. Hopefully it happens soon.

when the weather warms up i highly recommend catching at the Hog. good times for sure.

catching a game that is...

but this is a discussion for another day, if we ever see a baseball article on this site.

in the meantine, is it gametime yet? All i've heard this week is how KU will be tight and struggles against mid-majors. not tonight "we're gonna smoke these turkeys"!!!