Why 69 percent is a scary number for the Jayhawks; plus, predictions for KU-Illinois

Jesse Newell: Welcome back to the GameDay Cram Session, as Kansas is taking on Illinois on Sunday night in the NCAA Tournament Round of 32 in Tulsa, Okla.

Tom, Illinois comes in as the tallest team in the nation, according to KenPom.com. How much do you think the Illini's length will affect the Jayhawks' talented frontcourt players? 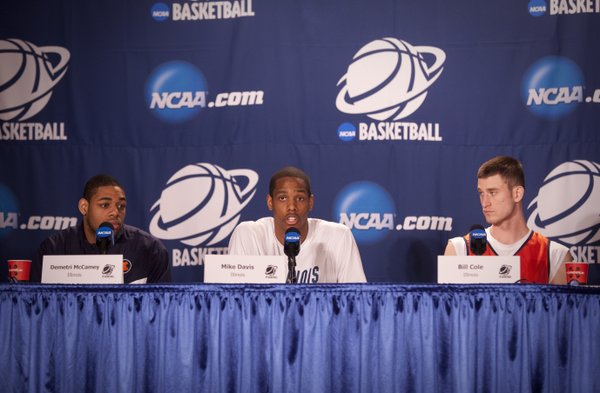 Tom Keegan: My guess is it will bother them a lot at first, but they'll get around to figuring out the best way to go about it. The twins have so many ways to make things happen and are such smart players, they'll figure out what works and get on a roll. Mike Tisdale and Mike Davis are very different type big men and they both have talent and a lot of experience, so it's not going to be easy.

Speaking of KU, do you think the jitters are gone, or do you expect the Jayhawks will be tight once again to start Sunday's game?

TK: That's a great question, but if I had to guess I'd say the jitters are gone. That doesn't mean they won't get off to a slow start. Illinois is a talented basketball team and the fact the Illini haven't won back-to-back games since Jan. 2-Jan. 6 qualifies as one of the most amazing statistics in college basketball this year.

JN: The Jayhawks' locker room was extremely loose on Saturday, with players even rapping in front of TV cameras.

Still, the Round of 32 game is the one that tripped up the Jayhawks last year, so you have to wonder if any of the players will be trying extra hard to get past this game.

All right, Tom, what's your prediction? 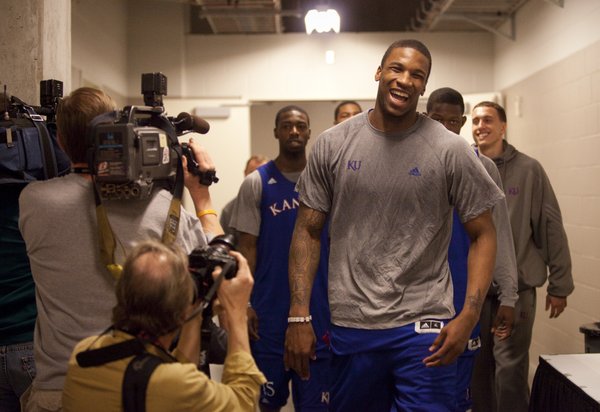 Kansas forward Thomas Robinson is all smiles as he makes his way to the locker room after practice on Saturday, March 19, 2011 at the BOK Center in Tulsa. by Nick Krug

This could get ugly for long stretches with a lot of banging in the paint, but Kansas is so fast it's tough to make it play ugly for 40 minutes.

Going by the KenPom rankings, KU has the toughest matchup in the Round of 32 of any No. 1, No. 2, No. 3 or No. 4 seed. In fact, at last check, Pomeroy's projections had KU with a 69-percent chance of winning — hardly the percentage you'd expect in a Round of 32 game for the No. 2 overall seed. 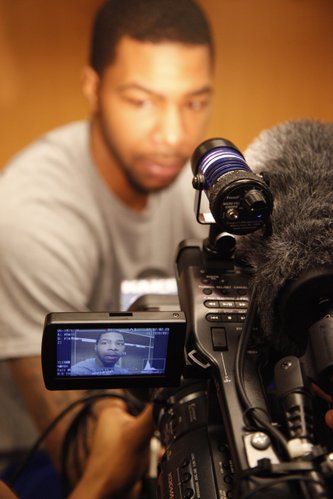 Kansas forward Marcus Morris answers questions about preparing for Illinois during interviews on Saturday, March 19, 2011 at the BOK Center in Tulsa. by Nick Krug

Illinois is ranked 16th in the KenPom rankings, and KU has only played one team ranked higher than that this season: Texas (sixth), which it went 1-1 against.

Illinois is just 2-8 in games decided by seven points or fewer this year. The Jayhawks need to hope that pattern continues, because I think we're going to see a game that comes down to the last few possessions.

Luckily for KU, if it can get by Illinois, the draw would get easier against Richmond in the Sweet 16. 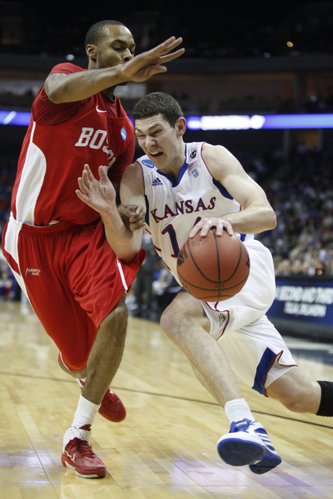 Kansas guard Tyrel Reed drives against Boston University guard Darryl Partin during the first half on Friday, March 18, 2011 at the BOK Center in Tulsa. by Nick Krug

Senior is so locked in and determined to partake in what he sat on the bench and watched as a freshman he seems as if he's going to have a tremendous tournament. 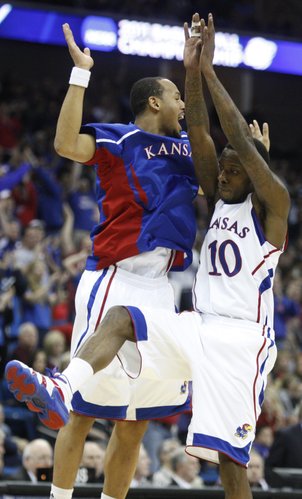 Kansas teammates Travis Releford, left, and Tyshawn Taylor collide in midair as they celebrate a run by the Jayhawks against Boston University during the second half on Friday, March 18, 2011 at the BOK Center in Tulsa. by Nick Krug

Illinois has a tendency to foul opposing guards, and Taylor is KU's best bet to make something happen off the dribble.

Illinois also ranks 265th nationally in defensive turnover percentage, meaning Taylor should be able to have a low-turnover game. Be sure to pay attention to the Jayhawks' turnover numbers; high-turnover counts against teams that didn't force many turnovers led to the Jayhawks' last two NCAA Tournament losses.

KU can't afford to give away possessions against Illinois on Sunday.

Most basketball games are defined by a 2 minute change of normal things. Expect one to happen today, and with it, a KU win. Playing a complete 40 minutes is the key. Funny there is no mention of IU's bench....a factor if whistles become an issue.....

IU is Indiana; U of I is Illinois.

Actually, U of I is UIUC.

They are widely know as U of I, especially throughout the state of Illinois and the Chicagoland area.

Actually, U of I is U of I, or the full name is University of Illinois at Champagne-Urbana, not UIUC.

Sorry Jabberhowky, University of Illinois at Chicago is UIC. KU is playing the U of I today. Or were you trying to be funny?

Those KenPom rankings are too digitally intellectual for their own good. Illinois in my mind was a bubble team.

The reason they've struggled is they're lacking toughness. I've watched the U of I a lot this year, cheered for them as a kid while growing up in Chicago, and am shocked they're the tallest team. They don't play like it. Tisdale doesn't clog the middle, plays more like a small forward. When Davis came a few years ago I thought he was going to be a great player. Hasn't turned out. McCamey may have played himself right out of the draft with his inconsistent play this year.

I'm not trying to be funny - just pedantic.

In any event, having spent the better part of the last two decades in the state I think the most appropriate abbreviation for anything related to Illinois is simply to indicate it as "Ill"

1: the reverse of good : evil 2a: misfortune, distress 2b: (1) ailment, sickness (2) something that disturbs or afflicts 3: something that reflects unfavorably

Jabberhawky's got this one correct. UNiversity of Illinois At Champaign Urbana. UIUC.

The School's got a huge Fratenity system, and their Club Hockey team is always fun to watch, though their Arena Smells like three month old damp sweatsocks.

This team is alot like Baylor. Full of potential, a couple of kids who are NBA players or easily could be. It all Starts with shutting down Demetri McCamey. You limit what he can do the rest of the team will wilt around him. Tisdale and davis are really tough post matchups, Bill Cole is tough off the bench.... BUt Brandon Paul hasn't developed yet, and as long as we can keep Crandall head from become Luther head.... and Jerem Richmond from showing his NBA potential.... We got this.

This team however, throughout the year has played.....errrr ummmm Soft.

I always heard it referred to as University of Illinois at Champaign-Urbana, therefore UICU!

Hawk to Rock: Josh Selby. Selby is a great player. He says he is nearly well. He will do some damage today.

Surprise Player: Jeff Withey. This game will be so rough that Withey is going to struggle, but he has to play at least 5-10 minutes against their footer. Little and Releford just can't handle Illinois' size at 4 either.

KU is likely to struggle inside. The Twins haven't run into this much size that plays this rough before. It is going to be tough sledding for them the first 30 minutes, but they can probably break loose down the stretch, when the Illini's lack of depth finally catches up with their bigs.

KU is apt not to struggle outside, because Tyrel and Brady will shoot back to their averages.

Elijah and Selby are apt to get in early to see if they can make threes. If they can, they play alot. If they miss early, then Tyrel and Brady play big minutes and it is grind it out till the buzzer.

Dylans, that's on the wing. A 6'6" guy is going to have problems guarding a 7'1" guy period. That's 7" height difference. That is very similar to TT guarding TROB in the post.

I've watched Illinois many times this year. I've not been impressed with the exception being UNLV. Most times they get lazy on offense and have poor ball movement. Tisdale can hit the open 3, but won't take the shot if guarded. McCamey is key. Stop him stop the team. Defense is a lot like we were last year, relying on the big men inside to block shots. I would think that you'll see the Morris twins moving beyond the arc more than normal this game. Try to make the big men move more than normal and guard the entire floor. I'd also expect Marcus to have more opportunities driving to the basket. If we can get them in foul trouble, I see this opening up pretty big.

When I saw the bracket I was not worried about U of I but they earned my respect against UNLV. Hopefully, vmwskywlk is correct that they played their best game Friday and will revert to the mean today.
IMO, this game will be a test for us for several reasons: the challenge of beating the 2nd round jinx; U of I's length inside will make it harder for us on the inside; the Twins will need to stay out of foul trouble and hopefully get their Bigs in foul trouble; we will need the 3 more than usual; we will need to hit a high % of free throws.
While I have respect for U of I, I am confident that this team will continue to show the character that developed after the KSU loss and do what it takes to win. It will probably be a very tough, sometimes ugly, game. Rock Chalk.

This is a game in which I would like to see Marcus occasionally move like a 3 man... perhaps when or if Withey gets in the game for a few minutes.

Was thinking along the same lines--as our bigs pass better (to each other) than most teams the U of I has faced it may bode to increased fouls committed by the Illini. Besides, the twins are playing so much like Manning did in '87-'88 (aside from the addition of the 3-point shooting), it's like looking back in time ... love those fade-away jumpers along the baseline.

While Little may have a more difficult time defending the bigs, I think his movement and mid-range jumpers could really play a factor--but our guards will really be the key on getting the ball inside (passing and driving) and hitting their shots. I'm VERY thankful for two seniors on the outside.

All of you are over thinking this. Don't do it. Listen, Illinois hasn't won back to back games since January. In a weak conference in The Big 10 with the exception of Ohio State and Wisconsin (who really hasn't played that well, just showed up during March).

Do you know why everyone is over thinking this? UNI. Don't. This is a different KU team, and a different opponent. A arguably worse opponent. It's time to have confidence. Last time we lost out early, we went to the Elite 8 the very next year, and this is a different, better, KU squad then that Elite 8 team that year.

Don't think about it. You have to beat teams to win it all, bottom line.

Illinois doesn't know whats coming. After this game they are gonna think they were hit by a Crimson and Blue freight train.

Last year VS UNI. What other motivation do you need? Nuff said!

P.S---Jesse, I hope you are wrong on your game prediction. Not two points---22 points.