The difference between last year's 32-2 and this year's 32-2; plus, predictions for KU-Boston

Jesse Newell: Welcome back to the GameDay Cram Session, as Kansas is taking on Boston University on Friday night its opening game of the NCAA Tournament in Tulsa, Okla.

Tom, 6-foot-6 Patrick Hazel is Boston's best defender. What more can you tell us about him?

Tom Keegan: I'm at every Kansas game in person, but other than Kansas, Marquette is the team I watch most because that's where I went to school. Hazel played two years at Marquette and didn't get to see much action. When he did play, he proved he's a really explosive jumper, a natural shot-blocker, albeit an undersized one, and an active defender who rebounds well. He didn't seem to have much of a feel offensively, as far as knowing how to post up and having confidence in his shot, but now that he's gotten a lot of playing time, I'm sure he's made strides there. He's definitely a springy jumper and a fearless competitor though.

JN: He'll have to be fearless for Boston to have a chance against KU. 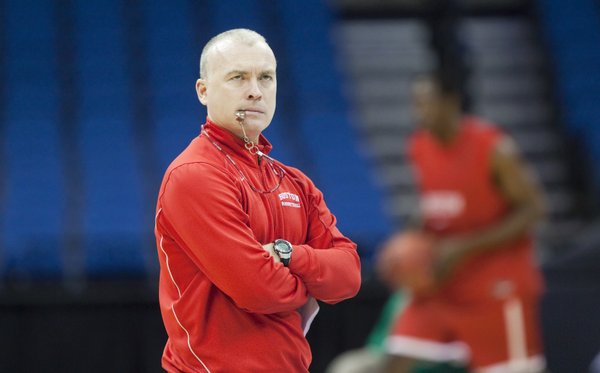 Boston University head coach Patrick Chambers casts an intense stare as he watches over practice on Thursday, March 17, 2011 at the BOK Center. by Nick Krug

The Terriers don't have a player on the active roster taller than 6-8, so he and fellow starter Dom Morris (6-7) will have quite a challenge trying to keep KU's Marcus Morris, Markieff Morris and Thomas Robinson away from the offensive glass.

Speaking of the Jayhawks, KU is 32-2 — the same record as last year's team at this point. What do you think are the main differences between the two teams?

TK: I think the biggest difference is that last year, Sherron Collins felt as if he needed to rescue the team every time it got into trouble and he came through almost every time. Two Elite Eight teams — Baylor and Kansas State — can attest to that. He was sensational in both of those games. He came up empty against Northern Iowa (5 for 16, five turnovers) and when a team relies that heavily on one player at crunch time, it's asking too much of that one player. This year, with co-stars Marcus and Markieff Morris leading the way and doing so by being as good passing as scoring, this team is more upset-proof. 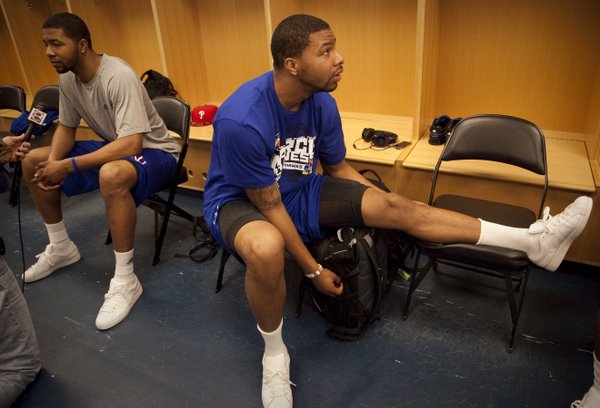 Kansas forward Marcus Morris watches the Kentucky Princeton game as his brother Markieff Morris takes questions from media members in the locker room during a day of practices and press conferences for teams playing second and third round games in Tulsa on Thursday, March 17, 2011 at the BOK Center. by Nick Krug

JN: Collins was great for KU last year, but his efficiency isn't close to what Marcus' is this year.

This year, in 34 games, Marcus has scored 588 points while putting up 366 field goal attempts (68 fewer than Collins).

Some other numbers factor into the statistics above (Collins had 15 fewer free throws than Marcus, while Marcus made 45 fewer threes than Collins), but it just goes to show how good of a scorer Marcus has been this season without having to take a majority of his team's shots. 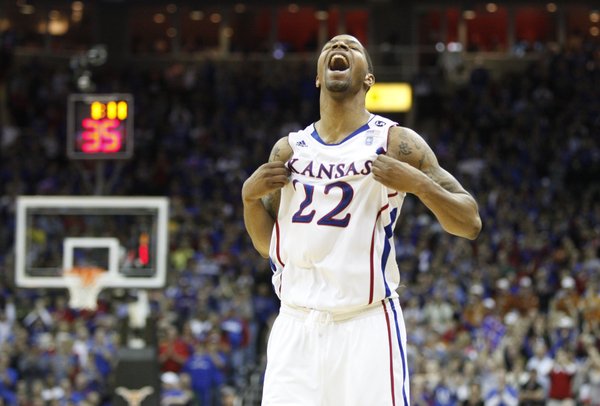 TK: Kansas 89, Boston University 61. Kansas is locked and loaded, ready for a blowout. 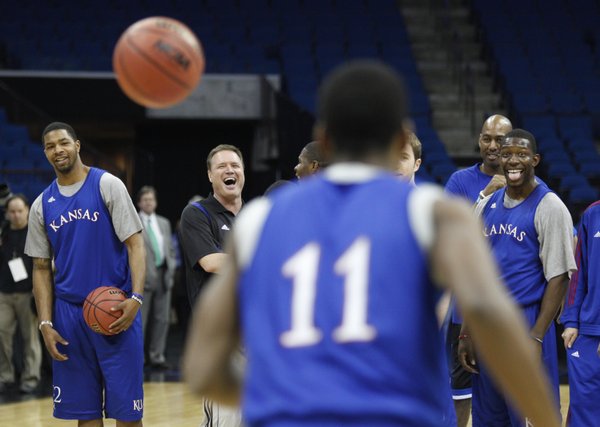 Kansas' Marcus Morris, left, head coach Bill Self, assistant Danny Manning and forward Mario Little react after a missed dunk attempt by freshman guard Royce Woolridge during a day of practices and press conferences for teams playing second and third round games in Tulsa on Thursday, March 17, 2011 at the BOK Center. by Nick Krug

America East player of the year John Holland has the size and quickness to give the Jayhawks some problems, but I just don't see how Boston stays close on the boards to KU. This might not be a laugher blowout, but it'll be plenty good enough to get the Jayhawks safely to the Round of 32. 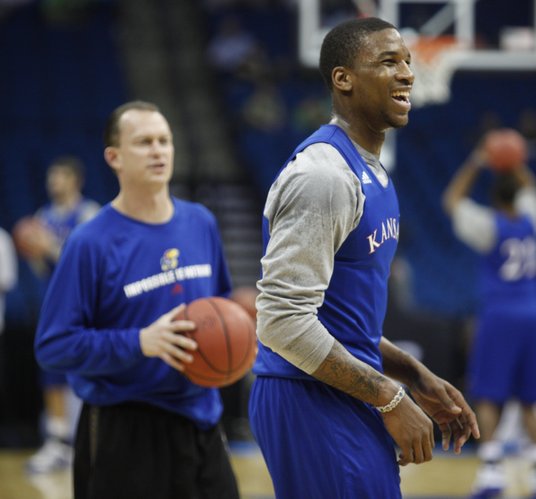 Kansas forward Thomas Robinson laughs with assistant coach Joe Dooley during a day of practices and press conferences for teams playing second and third round games in Tulsa on Thursday, March 17, 2011 at the BOK Center. by Nick Krug

He's too much for BU's undersized big men to handle.

JN: I'll go with Markieff Morris for the same reason. 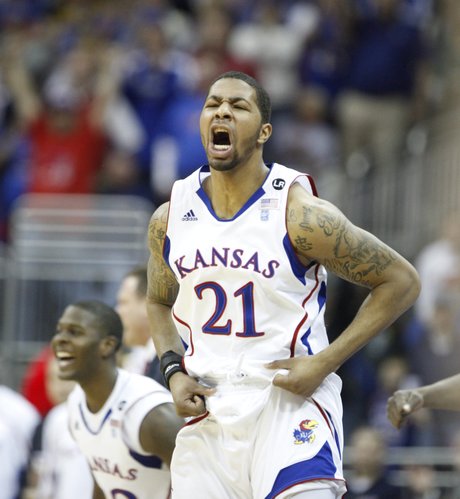 Kansas forward Markieff Morris jumps up to celebrate a dunk by teammate Tyrel Reed against Texas during the first half on Saturday, March 12, 2011 at the Sprint Center. by Nick Krug

(By the way, that thumping you hear is me patting myself on the back for predicting a 14-point, six-assist, one-turnover game for Brady Morningstar against Texas. He had 13 points, six assists and two turnovers. Blind squirrel meet acorn.)

Markieff hasn't had a double-digit rebounding effort in his last five games. He'll break that streak against Boston on Friday.

Take care of business Hawks. It's time to represent and let the world know we mean business. F-Texas!!!!!!

Markieff and TRob, each with 10+ rebounds. Maybe, each with a double - double.

Brady and TT with 5+ assists.

The 3"s will rain and fall for KU.

KU's freethrows will be slightly above average, maybe 71%.

One KU none starter will have an exceptional game (TRob, Releford, Little, Selby)

Each of the walkons will appear in their first NCAA tourney.

Negatives: The Hawks will not score 100 points, They will turn the ball over 15 times (6 in the first 10 minutes - nerves, not because of BU steals.)

Since I'm into superstitions here's another thing different from last year. Last year KU played the opening rounds on a Thursday/Saturday. This year it would be a Friday/Sunday. (note - I already know what days KU played in 2008, just leave it at that).

Assuming we win, who would we rather play in Illinois/UNLV? I see Quintrell Thomas is one of the bigger players for the Rebels.

I was in Denver yesterday to scope out Louisville and Vandy... they were awesome! not.

If by bigger, you mean "heavier". Then yes. In fact he would be the heaviest Jayhawk if he still played in the promised land. But if by bigger you mean, important, then no. He is a key reserve.

I hate jumping ahead like this, but UNLV has a nice little resume. Wins against Wisconsin, VTech, @KState, New Mexico twice and Colorado St. 6 of their 8 losses have come against SDSU, BYU and @Louisville. They should handle Illinois easily.

BTW, I know Illinois has some nice wins too, but they just fell apart down the stretch.

I would be crushed if we lost in the second round again, but it is interesting to note that - at least theoretically - we could start our season with Longwood and end it with Morehead.

And I think our announcers will be Marv Albert and Steve Kerr.

Avoiding Gus Johnson being the main point here. I like Gus' style but the guy has been the announcer on all of KU's major tournament exits.

Last year wasn't our first round game the late game, it is always nicer to play first, shower and then watch the next opponent go late. sAme for every weekend, play first and watch next foe battle it out.

Duke made a statement today. I believe the Jayhawks need to make a statement, too. A close game with these little dogs won't be a good situation. Look at the K-State/Utah State game last night. It was a close game and Utah State almost came back.

Is comforting to know that any of 5 or 6 players could lead Jayhawk scoring this season. We are not an easy team against which to prepare 2 halves of effective defense.