Is Bill Self or Mark Turgeon the pick for Big 12 coach of the year? Also, KU-A&M predictions

Jesse Newell: Welcome back to the GameDay Cram Session, as Kansas is taking on Texas A&M on Wednesday night at Allen Fieldhouse.

Tom, Texas A&M coach Mark Turgeon has done a great job to lead the Aggies this year to third place in the conference. Would he be your choice for Big 12 coach of the year? 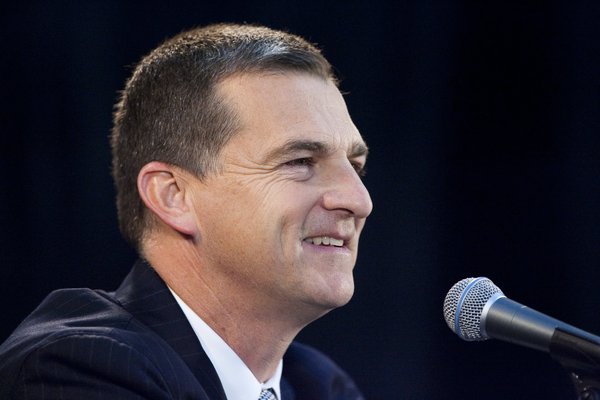 Tom Keegan: No. Bill Self would be my choice. With suspensions and injuries, the roster has been ever-changing, which should result in choppy play on the court. That and losing two players to the lottery, plus a player who was the all-time winningest player in school history and was the team's leading scorer, makes Self the run-away Coach of the Year in the Big 12. Turgeon's a good coach and has done a good job with this team. Ditto for his best buddy Tad Boyle at Colorado.

That's usually not a formula a team can depend on from year to year, but the ability to hold on in tight games has moved A&M from a bubble team to a sure-fire NCAA Tournament squad this year.

Switching to KU, what will you remember most about each of the KU seniors?

TK: I'll remember Brady Morningstar pestering stars from across the country into bad shooting nights and I'll remember him making so many great passes. 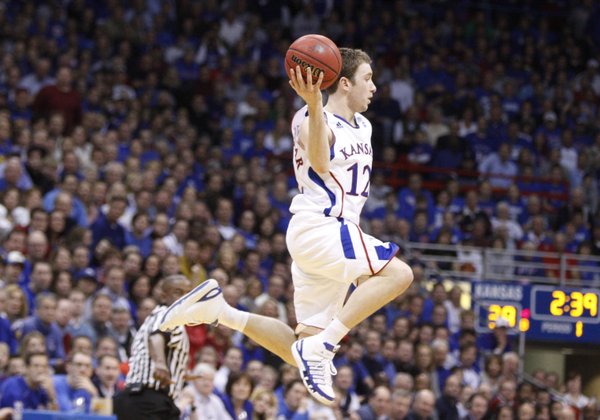 Kansas guard Brady Morningstar leaps to pass up court against Missouri during the first half on Monday, Feb. 7, 2011 at Allen Fieldhouse. by Nick Krug

I'll remember him finally, as a senior, getting the credit he's deserved for so much longer than he got it. On a personal note, I remember eating in the Vermont Street BBQ during my first week on the job in the summer of 2005 and in walks a tall skinny kid whose picture I had seen in one of the many Lawrence Journal-World newspapers I had taken home with me after my job interview. I stood up, introduced myself to him and he gave me a nice warm welcome to town. I had gone on a radio show with his father in, I want to say 2001, to talk about my first book, "Sleeper Cars and Flannel Uniforms."

I guess after I've forgotten all the particulars of the many clutch three-pointers Tyrel Reed hit during his career, I'll remember how much more relaxed he became year-by-year in an interview setting. 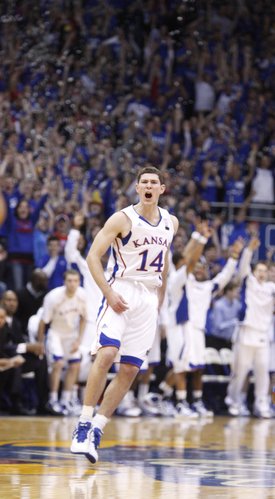 Kansas guard Tyrel Reed gets the Fieldhouse fired up after a three-pointer against Texas during the first half on Saturday, Jan. 22, 2011. by Nick Krug

He came to trust reporters more and more each year and realized nobody was trying to trap him into saying anything and everybody just wanted to hear his intelligent take on things. Really, really nice guy. What I'll remember about Mario Little is how much his mannerisms and tone of voice remind me of Michael Jordan's. Uncanny similarities.

JN: OK, Tom, what's your prediction for this game? 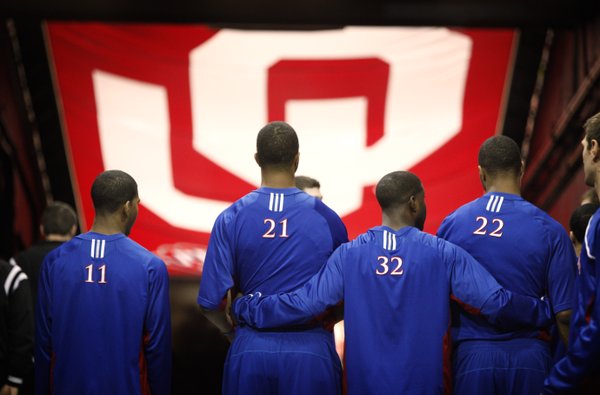 Kansas players Royce Woolridge (11) Markieff Morris (21) Josh Selby (32) and Marcus Morris (22) wait in the tunnel before taking the court on Saturday, Feb. 26, 2011 at the Lloyd Noble Center in Norman, Okla. by Nick Krug

Kansas might be due for a bit of a sluggish night, but the Aggies don't have enough firepower to take advantage.

JN: I'll go KU by 21. Though KU probably didn't need any additional motivation on Senior night, a chance to clinch at least a tie of a seventh straight Big 12 championship should give the players an even bigger boost. This feels to me like a game where KU starts with incredible energy and emotion, gets off to a 14-2 start, then cruises. A&M might be great in close games, but I don't envision this one will be close.

All right, Tom, who's your Hawk to Rock? 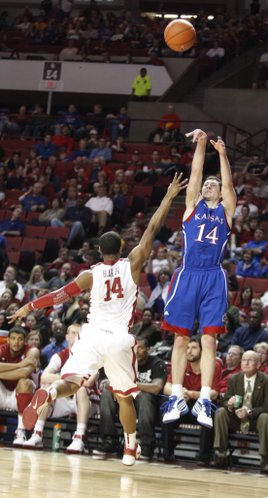 Kansas guard Tyrel Reed puts up a three from the corner over Oklahoma guard Carl Blair Jr. during the first half on Saturday, Feb. 26, 2011 at the Lloyd Noble Center in Norman, Okla. by Nick Krug

I had a premonition that had nothing to do with winning the lottery. Still waiting for that one. In this latest premonition, Reed caught fire the way Jeremy Case did on his Senior Night and was on the floor longer. Reed kept hitting shots and didn't stop until he had scored 21 points. 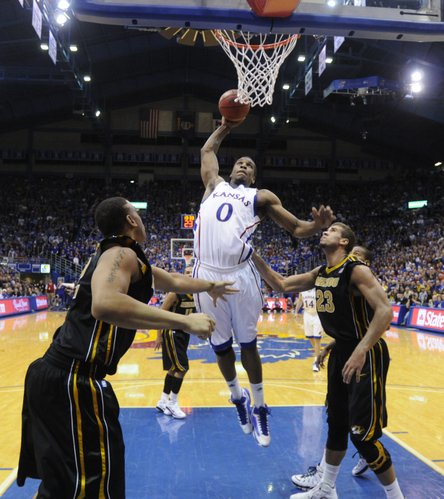 Kansas forward Thomas Robinson delivers a tomahawk jam between Missouri defenders Steve Moore, left, and Justin Safford during the second half on Monday, Feb. 7, 2011 at Allen Fieldhouse. by Nick Krug

The Aggies also are one of the worst teams in the nation when it comes to getting shots blocked, as a whopping 13.5 percent of their two-point attempts in Big 12 play have been blocked (worst in the conference).

Other than Jeff Withey, Robinson is KU's best shot-blocker, and he should be eager to bounce back after a 10-minute, four-turnover performance against Oklahoma on Saturday. Give me at four blocks for Robinson — along with improved offense — on Wednesday night.

Credit, schmedit –– the extra incentive of SrNite will magnify the difference in talent level. It would take a Svengali to keep this one within twenty by halftime. By the end, aTm may be struggling to score 50, even with the extra possessions after 40 or 50 KU baskets.

It's unusual for me to feel this certain of blowing any team off the court, so I may be outside the left field foul pole, but I think "Fear the Phog" is the theme for tonight, making any opponent irrelevant.

Keegan is saying almost the exact same thing I said regarding Self for coach of the year (on the Eric Sorrentino blog a couple of days ago, and again on another thread Tuesday). I offered up reasons why various other coaches should not win over Self. Andy Katz has jumped on the Frank Martin for Big 12 COY. Give me a break.

I would have to agree.....ksu was picked to win and ku was predicted fifth in the league. So martin underachieves,self over achieves and katz wants him coy! Doesn't make much sense to me.

Well...KU was picked second in the league. It was that clown Dick Vitale that picked us 5th. But it's still the same in that KU has exceeded expectations while Martin has failed to live up to them.

I think it's pretty clear that Rick Barnes should be coach of the year.

Nuts, I almost said that with a straight face.

Let's go KU send the seniors out in style!! RCJHK

Brady, Tyrel and Mario will all shine tonight. Bill Self should be coach of the year! The line is 13. I think a victory by 20+ may be in order.

I will miss all the Seniors but especially Tyrel. Tyrel is my kind of player. So, I will probably get a little emotional when the Seniors give their speeches after the game. I always do. I know, though, there is still a lot of basketball left in this season. Good luck, Jayhawks!

i think itll be a good night for the hawks. our seniors are some of our more consistent players, and theyll be getting plenty of play time.

as for coach of the year, In my opinion nobody really stood above the rest. Bill juggled many different lineups, but our game was understandably inconsistent. If UT hadnt lost at cu and nu, I'd have expected barnes to get the honor. I like turgeon so if he wins it; good for him.

For Coach of the Year, my vote would be for either Doc Sadler or Tad Boyle.

For best Coach in the League, it'd be for: Bill Self followed by Mike Anderson and Mark Turgeon.

I believe Coach of the Year should honor someone who has done something extraordinary... taking a team from nobody to somebody. If no one does that, then it should go to the best coach in the league.

Coach Self has done an outstanding job every season. He's head coach at Kansas. That helps. Of course he's in the conversation. And in a year where everything remains the same and no one does extraordinarily things, Coach Self should be Coach of the Year, because he's done the best job year in and year out. It helps that he has 2 Head Coaches sitting on the bench next to him (are Manning and Dooley the Guthridge & Williams of this era?).

So why Sadler or Boyle?

I'd agree that Sadler has done a good job improving his team...but a sub-.500 conference record and 8th place in the league? Sure reward that if you want.

As for Tad Boyle, great job this year no doubt. But whether people want to listen to this or not, he did not have a hand in assembling this team. He inherited it from the previous regime. You pointed out that they were already trending upwards - jumping from 9 wins to 15 wins and an almost .500 record last season - under Bdzelik with the talent he had brought in. Since so much of a head coach's job is recruiting it's hard for me to give him as much credit as some are willing to heap on him.

I'm with ICT on this one.

Tad Boyle was able to convince Alec Burks to stay, and has found a way to use him to win games. But I agree, that he's not yet deserving of coach of the year. Maybe if they were in the top 4 in the league...

Doc Sadler is able to take mediocre talent that no one else wants and field a mediocre team. Sure they won a lot of non-con games and played Kansas within 3 points. Look at their non-con strength of schedule. I guess when the expectation is that you'll have a losing record and finish in the bottom 4 in conference it's not that hard to get people excited.

I have to agree that Boyle would be my choice. Doc and NU have knocked off Tx and mizzu but have lost to Tech.

HCBS is an amazing coach, he recruits like crazy, and that works in his bennifit so when there are injuries, suspensions and other issues he can put other pieces into the mix and not shake things up tremenduosly.

Bill Self should get Big 12 Conference coach of the past decade and he hasn't even been in the league the whole 10 years, but what he has done with 6 straight conf. titles and on the verge of #7 is unheard of in a power conf like the Big 12.

Ralster, I have no idea what you're talking about. Your awesome photo is making it impossible for me to concentrate.

Just wonder if we'll be sayin goodbye to the Morri tonight. I hope not.

Hope for the best, expect the worst.

My gut feel is that if we reach the final four, the twins are gone.

That said, they are exactly the kind of guys who could surprise everyone, pull a Florida, come back and try to repeat. Those two love college, and love KU. It's refreshing having them on the team.

Love the photo in the OU tunnel.