This is starting to feel like that course in advanced statistics that everyone tells you is impossible to understand.

When thinking about college realignment, v. 2.0, I have no idea what to think anymore.

For the second consecutive year, realignment dealing primarily with the Big 12 has dominated college football. The only difference this year is that the rampant speculation is taking place during the season, stealing the focus away from the field and putting it somewhere in outer space. Seriously.

Oklahoma might join the Pac-12 and take Oklahoma State with it.

Who knows what Texas will do. But the Longhorns, like last summer, are the heavy hitters who likely hold the key to either saving the league again or dissolving it into oblivion.

Texas A&M still has to accept an invitation from the SEC.

Can anyone make any sense of these developments?

Then, there's the financial side of this mess. Texas signed a 20-year, $300 million deal with ESPN for the Longhorn Network in January. Could UT keep the LHN in the Pac-12, which has equal revenue sharing? Last summer, the answer was no. That's essentially why UT is still a member of the Big 12. For now.

Furthermore, there's the 13-year, $1.17 billion deal commissioner Dan Beebe and the Big 12 landed with Fox in April. What happens to this deal if there are no teams left in the Big 12 to play any games next year?

Our Matt Tait mentioned this on Monday, but there's simply too much financial uncertainty for this thing to be completely resolved in a week.

There is no fixed penalty for a member institution leaving the Big 12. The conference bylaws are complicated and vague. For reference, Nebraska (Big Ten) settled for $9.25 million, while Colorado (Pac-12) settled for $6.86 million in exit fees last year.

I have no idea what will happen, but I do hope Kansas stays in a BCS Conference, as Tom Keegan pointed out today.

Now, for the put-on-the-back-shelf, on-the-field analysis from the first week of action in the Big 12:

I completed my first week of ConferenceChatterTV, where I make picks (straight up, and against the spread) on every game in the Big 12.

Not a bad showing for the first week. My one straight-up loss was Baylor pulling off a 50-48 thriller over TCU on Friday. If quarterback Robert Griffin (21-of-27, 359 yards, 5 TDs, 0 INT) keeps putting those numbers up, he could find himself in the Heisman conversation. 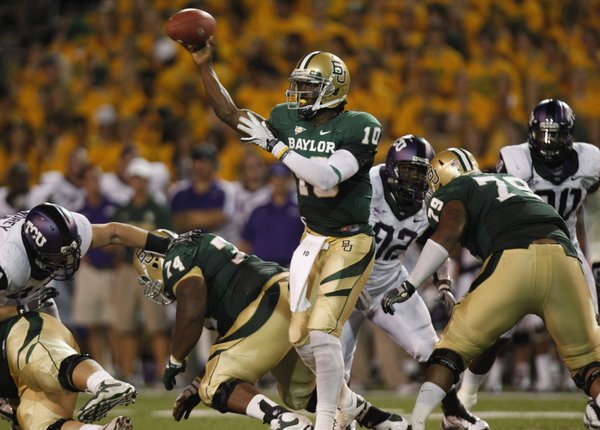 Some bullet-point observations from the first week:

• Every Big 12 team won its week 1 games, netting the conference a 10-0 record to begin the season, the best mark in the country. The Big East also went undefeated in week 1 at 8-0.

• Big 12 team that looked the worst: Tie between Kansas State (10-7 escape over Eastern Kentucky) and Iowa State (20-19 scare of a victory over Northern Iowa). Iowa State needed a game-winning touchdown with 40 seconds left, while Kansas State trailed Eastern Kentucky for three quarters. Kansas fans have to feel a little better about potentially beating these two teams this season (Oct. 22 at home vs. K-State; Nov. 5 at Iowa State).

• Player of the week: Baylor's Robert Griffin. As mentioned above, he was sensational on Friday against TCU in Baylor's 50-48 victory. He was also more accurate with the ball than in the earlier stages of his college career. People will compare him to Vince Young, but Griffin throws a much better deep ball, and is also more accurate. Could that translate into NFL success for Griffin?

Here's the first edition this season of the Sorrentino Scale, which ranks each Big 12 football team every week: 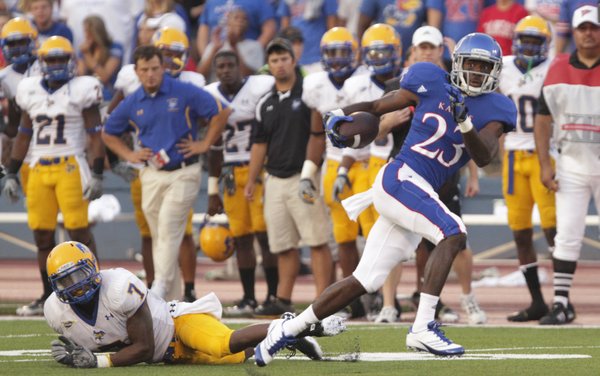 IMHO we're better than K-State. 5 Fumbles vs Eastern Kentucky? Eastern Kentucky was w/out its two best offensive players and still almost got out of Manhattan w/ the W. If I was a K-State fan I'd be awfully worried.

It will be interesting to see how the KU defense does against No. Illinois.
OSU and Arizona will be a fun game to watch with 2 top QB's.

I agree with BleedingCrimsonAndBlue----why the heck is K-State ahead of KU? I talked to a K-State alum who was at the game in Manhattan. She said it looked like a bad high school game.

KU definitely looked better in its opener. Perhaps the lopsided KSU victory in Lawrence from last season is still fresh in my mind. Another week of the same developments, though, and promise to move KU up. Thanks for reading!

Can I get you a cup of Joe? Seems like you haven't woken up to this little deall called the 2011 FB season. Isn't it something like half the team is new this year? You're not in 2010 anymore.

I don't agree with your Big 12 rankings Eric. Personally I would go with an order of:

Respect for Baylor at 3. That's a bit too high for me, though. I see Baylor a lot like OSU, in that they both have a spectacular offense and a subpar defense. I think OSU has a bit more firepower on O and a better D. I see where you're coming from on the rest of the rankings. Can't argue too much there, although I like Missouri over Texas if MU can iron out some kinks on offense. Thanks for posting.

My personal rankings are based solely off of the week 1 games, but I do think that your rankings are closer to what the conference standing will look like at the end of the season. I just hope Franklin continues to struggle and Missouri finishes in the bottom half of the standings.

Definitely see BU ahead of the tiggers, but I'm not buying the shorthorn hype.

Love the photo of Tony, but just makes me want to see highlights from the game, and sorry but watching people enter the stadium and the players stretch does not count as highlights. Pierson's runs, Patterson's catch, Shepherd's catches, a dash of Miller and Sims, and even just the one Bourbon sighting.