Big 12 review, week 2: League may not exist in future, but it's pretty darned talented in 2011

It's a shame the Big 12 is so unstable at the moment. One minute, the league seems like it could be saved, while the next minute, doomsday strikes, plays the role of Buzz Killington and threatens the existence of the conference.

Depending on the decisions from Oklahoma and Texas, this could be the final year of the Big 12, which began athletic competition in 1996.

All the more reason it's tough not to feel a little uneasy when tallying up the Big 12's combined football record after the first two weeks: 13-1, tops among BCS-level power conferences.

It's not like Big 12 schools are beating up on cupcakes, either. TCU, Iowa, Arizona, BYU, Northern Illinois, Tulsa and SMU — each of these teams made bowl games last year — have already fallen to Big 12 squads this fall.

Furthermore, five Big 12 schools are ranked in the latest Associated Press top 25 poll, including the top team in America, No. 1 Oklahoma.

Nonetheless, there may not be a Big 12 after this year. Ridiculous and crazy to think about.

This past weekend completed my second week of picks on every Big 12 game, straight up and against the spread. The results, from week 2: 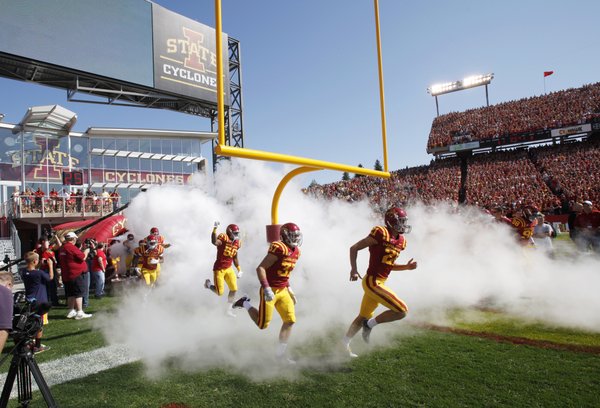 An unpredictable second week in the Big 12, which actually made picking games straight up difficult. My two missed picks: Iowa State pulled off a 44-41 triple overtime thriller over Iowa, while Kansas took down Northern Illinois in a riveting shootout, 45-42.

Some bullet-point observations from week 2:

• The presence of an effective ground game has made KU's Jordan Webb a better quarterback. The sophomore signal caller has a super-efficient touchdown-to-interception ratio of 6-0 after two games. The six touchdown passes are one shy of Webb's entire 2010 season total. 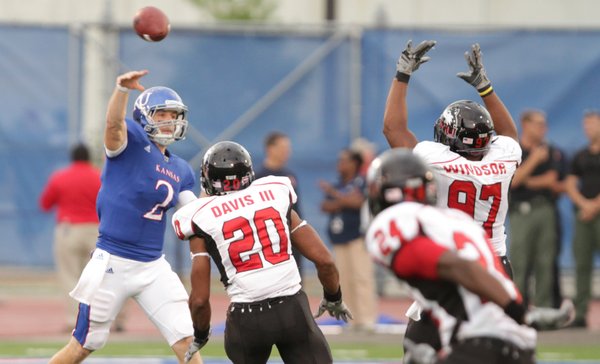 Player of the week: Jordan Webb, Kansas. Has anyone looked more improved from last season so far? This honor could have also gone to Iowa State quarterback Steele Jantz (25-of-37, 279 yards, four TDs), but Webb (21-of-30, 281 yards, three TDs) steals the award because of his ability to tilt the clutch-o-meter the farthest in his favor. Webb tossed a game-winning, six-yard touchdown pass to D.J. Beshears on fourth down with nine seconds left against Northern Illinois on Saturday.

• Saturday essentially marked the end of the Garrett Gilbert era at quarterback in Austin, Texas. How's this for a line: 2-of-8, eight yards, two interceptions. It confuses me why Gilbert never figured it out at Texas, especially after showing promise in the BCS Championship as a freshman two years ago and taking over for an injured Colt McCoy. Since then, he's thrown 11 touchdowns versus 19 interceptions. True freshman David Ash and sophomore Case McCoy (yes, they're related) will take over in a two-quarterback system.

• Earlier in the blog, I mentioned the Big 12 was 13-1 after two weeks of play. The one loss came late Friday night/early Saturday morning, when Missouri fell at Arizona State. MU quarterback James Franklin looked good, however, completing 26 of 42 passes for 319 yards and two touchdowns, while rushing for 59 yards and an additional score. MU should rebound against Western Illinois this weekend.

• Upcoming game of the week: Saturday night primetime, when No. 1 Oklahoma travels to No. 5 Florida State. OU's path to the BCS Championship could take a hit. OU destroyed Florida State last season, 47-17, in Norman, Okla. The Sooners enter this year's contest as 3.5-point favorites.

The latest edition of the Sorrentino Scale is listed below. The number in parentheses is what the team was ranked last week:

Gotta give it to MU for blowing a perfect 14-0 conference record so far this season. Leave it to the Tigers to make us look bad.