KU most balanced team in country by wide margin in one measure; Next up: Missouri

I've come away with a common thought after watching the last three Kansas University basketball games on television.

If the Jayhawks keep shooting like this, it's going to be mighty difficult to pick against them in March.

You've all seen it. The balance is remarkable, the crispness is refreshing, the depth is so clearly evident and the coaching is magnificent. The last three KU games — against Kansas State, Texas Tech and Nebraska — have ended in the same dominating fashion each time: win 90-66, win 88-66, win 86-66.

How's that for consistency? 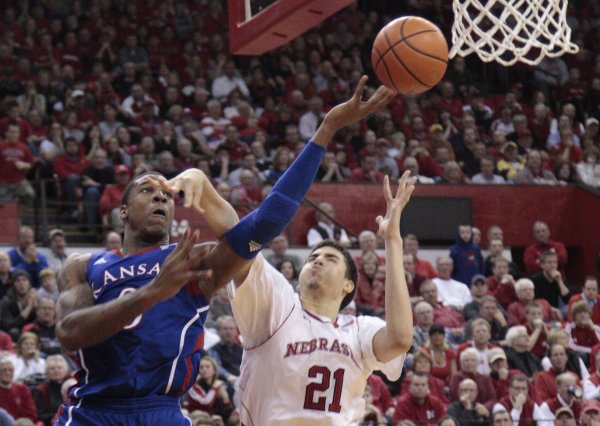 KU's shooting clinics and sturdy defensive performances made me wonder: Just how balanced is No. 2 Kansas on a national scale? I compiled an exercise in an attempt to find a clearer answer.

Because shooting is such a determining factor in wins and losses, I added up kenpom.com's effective field goal efficiency rankings for offense and defense for each team in the top 25 of the latest Associated Press poll.

The statistics I used were updated after Saturday night's games.

To my surprise, the Jayhawks were the only team in the country ranked in the top 10 of both statistical categories. And it's really not close. The next-closest team to KU's total score of 8 was Duke's 39.

Certainly, this doesn't tell us everything about college hoops, but as KUsports.com online editor/Ken Pom king Jesse Newell said to me on the phone recently in the simplest terms possible: "When KU is shooting, it's been going in of late. When KU's defending, it's not been going in."

The Jayhawks have been unbelievably balanced this season. They've shot and defended exceptionally well, as evidenced by the above exercise. 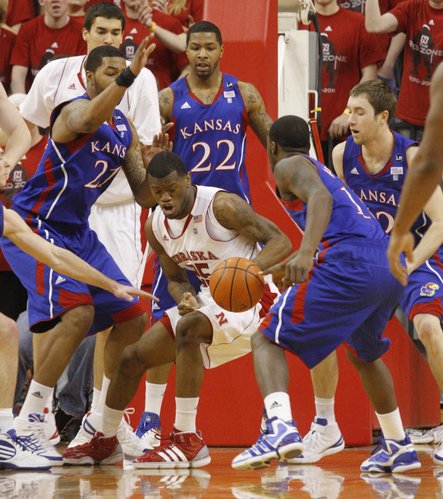 One thing I should point out about effective field goal percentage numbers: They don't take a team's schedule into account. That's probably why No. 3 Texas was rather undervalued in the above exercise. The Longhorns had a tougher nonconference schedule than most (Illinois, Pittsburgh, North Carolina, Michigan State, Connecticut to name a few), undoubtedly lowering their offensive production a bit.

Regardless of KU's schedule — we're already halfway through Big 12 play — the Jayhawks have displayed offensive and defensive balance in shooting percentages matched by no one. 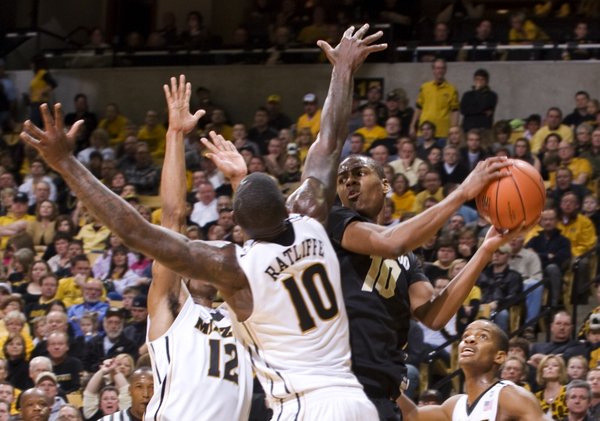 The Tigers lead the conference in turnover margin at +5.52 per game. They are in the top 5 nationally in steals at just about 10 per game.

KU's ball movement was darn near flawless against a similarly-pesky Nebraska squad on Saturday. The Jayhawks will have to be equally as crisp on Monday. Missouri, to no one's surprise, pressures the entire length of the court, so while MU and NU have similar defensive tendencies, it's a different dynamic. NU, to my recollection, doesn't pick up full court as much as MU. I look at Missouri as a more talented, even peskier version of Nebraska.

Missouri has some quality depth. On Saturday, Kim English and Michael Dixon Jr. came off the bench. Coach Mike Anderson elected to start brothers Phil/Matt Pressey and Marcus Denmon at the guards, with Ricardo Ratliffe and Laurence Bowers at the forward spots. Very similar lineup composition to Kansas with three guards and two bigs.

It will undoubtedly help KU that the game is at Allen Fieldhouse, where MU last won 11 years ago.

Kansas has won eight of the last nine meetings overall and will be favored again on Monday night.

The way the Jayhawks are playing, they'll most likely be favored for the rest of their Big 12 Conference schedule. With the balance that KU has displayed, though, this is to be expected.

There's no doubt they are playing like the No. 2, if not No.1, team in the country. However, their last three games have been against a demoralized and struggling KSU, a TT team that gave up after the first five minutes in a gym with 20 people in it, and a NE which started a 350 pound Brazilian sumo wrestler. Given Mizery's road woes in conference this year, I expect the usual beatdown of the tigers at AFH.

We're playing Mizzery at a perfect time. We need to practice our ball handling. Now is the time for TT.
Once we have this perfected, we can go on to pound them by 50.

"The last three KU games — against Kansas State, Texas Tech and Nebraska — have ended in the same dominating fashion each time: win 90-66, win 88-66, win 86-66. " Anyone else see a disturbing trend with these numbers? It would be a travesty if KU doesn't win by more than 20. However, the numbers clearly predict an 84-66 finish. Let's hope the hawks break this pattern tomorrow night! (Note: sarcasm intended)

You have to give the UT game as a wash given the circumstances and the way they played the 1st half. With that, I'd love to see our front line matched up with any in the nation. I smell a Tyler Hansbrough moment in the FF.

Our offense may be balanced but I haven't seen a defensive performance that can carry us through March, yet. I have every confidence that we will get there in time, though.

agreed...I'm not worried about offense with this team. I know it's "unfair" to compare this team to the 08' Championship Squad, but both teams share a unique trait---being the most talented team everytime they take/took the floor.

Usually, great athletes and great coaches combine to form deadly defensive teams (any Michigan State team, recent Pittsburgh teams, old Duke teams, etc) and Coach Self's track record with lockdown defenses is good news for this squad. I know our stats say we're a great, maybe even elite defensive team...but I think anyone who watches every game knows otherwise. Our two biggest weaknesses in D this year were our two biggest strengths for the 08' team: perimeter defense and post D (specifically after the other team is operating in the post).

Tyshawn, IMO, is our best overall perimeter defender. He lets people go by him at times, but so does everybody else. Brady is better suited for players who use craftiness to score because he can usually out-craft them. But can't you just picture Self having nightmares of Kyrie Irving (if healthy) and Nolan Smith carving up our guards? Russell and Mario were the best defensive backcourt I've even seen out of KU, and we're gonna need to see our guards (who are capable) inch closer to their level if we plan on winning a NC.

Our post defense worries me just as much, if not more. I am definitely scared of Ohio State and Jared Sullinger. If we get bullied around by UCLA's fatboy and NU's fatboy, imagine what someone who can match his size with skill will do to us. Add in Dallas Lauderdale and I'm officially terrified. It's just tough to keep people that outweigh you by 40-50 lbs out of the paint on rebounds. I hope TRob can do some heavy lifting come tournament time.

That being said, I like our chances come March

I keep thinking about the fact we haven't beaten a ranked team yet all year.

Would like to see the above figures for teams in just their conference games. Most recent figures are always the most telling.

Judged by the above figures, our #2 ranking is justified. Some complain that we've had a weak schedule. While we haven't beaten anyone in the top ten yet, we did play a decent out of conference schedule. A number of our wins have come against teams doing very well in their own conferences. We drummed Colorado State, who barely lost to BYU (or was it San Diego State?) Michigan, who gave the Hawks a very tough game, has held up pretty well in the Big 10. And, we have beaten teams that have been ranked (Baylor, K State, Memphis), and others who are now ranked (Arizona). It's also a fact that we have not lost on the road (opponent's home courts or neutral courts).

The Hawks one blemish must be considered in two ways. We led by a medium large margin, but lost by a medium margin. Did we lose because of the situation (physical exhaustion due to sleep deprivation), or because Texas was a very good team? Truth be said, it was both. Against almost any other team, we still win. But give Texas credit, they had the hosses to prevail. Under different circumstances, it would probably have gone down to the wire. And with the home court advantage, I think we would have prevailed.

Do we need to improve? Definitely. Can we? HCBS says we can, and I trust his judgement. Do we have the incentive to win it all? Ask the players what it felt like to lose in the second round last year. RCJHGKU

If you use eFG% as your only measure you miss a good portion of the game. Mr. Newell's points per possession is more significant as it adjusts for rebounding, turnovers, FT's, etc. that determine possessions and outcome.

There is no doubt that we are talented and balanced. The real struggle is two-fold. When playing in high speed transition and the hint of a defense (no dunk) we settle for cheap short sighted rushed shots and do not convert. When we run with numbers we take shots that suggest much less focus and determination. When our offense makes 3-5 passes we execute and position for squared up points and penetration. Our second weakness is free throws, and so goes the game against any tough team.