Before the season, I thought the Big 12 North would be a two-horse race between Nebraska and Missouri.

It's been five weeks, and the Cornhuskers and Tigers are both undefeated at 4-0.

But what about Kansas State? Are the Wildcats contenders in the North? We'll find out tonight when the Wildcats play host to No. 7 Nebraska at 6:30 p.m. in Manhattan. K-State is also undefeated and technically holds first place in the North all to itself. The Wildcats, with a victory over Iowa State, are the only North team undefeated so far in Big 12 play.

Who do you think will prevail in tonight's Big 12 North showdown on ESPN? For my pick, along with my other Big 12 predictions in week 6, check out the latest episode of Conference ChatterTV:

Fans of Colorado (3-1) may proudly declare themselves Big 12 North contenders because of consecutive victories over Hawaii and Georgia. OK, the Bulldogs make their living in the powerhouse SEC. I'll give CU that. But I refuse to call the Buffaloes contenders until they snap their 13-game road losing streak.

To see where I think the North contenders rank with the rest of the Big 12, here's the latest Sorrentino Scale. The number in parentheses is what the team was ranked last week:

Final Big 12 item today: An update on the KUsports.com over/under contest that many of our readers participated in nearly two months ago.

On Aug. 6, I posted a blog entry that asked 10 over/under questions and a tiebreaker question about the upcoming Big 12 football season. The winner will receive a T-shirt, our KU preseason men's basketball magazine and some other cool stuff.

We won't know a winner until the end of football season, but here's a refresher on the questions, along with analysis on how each question looks after five weeks. It's too late to register answers now, but this rundown should give our participants an inside look on how their answers are looking.

I'll try to do an update like this every month, so participants can go back and look at their answers to see where they stand.

Let's get right to it:

Question 1: The rushing touchdowns for Kansas University sophomore running back Toben Opurum this season. Line set at eight. Over or under?

Analysis: None really needed. Since I wrote the blog before coach Turner Gill moved Opurum to linebacker, this one's pretty easy. Hope you picked the under.

Analysis: A lot can happen in two months, can't it? Pick was KU's starter for its catastrophe of an opener against North Dakota State, but Jordan Webb has proved to be more effective. Barring injury to Webb, contestants should hope they picked the under on this question. 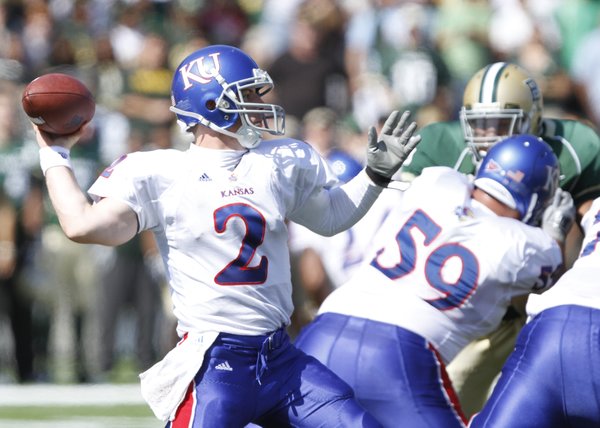 Analysis: The Jayhawks are 2-3 heading into their bye week. Seven wins is a stretch. Participants who picked the under here should feel confident.

Analysis: Through four games, Thomas has 628 yards, an average of 157 per game. Assuming the Wildcats play in a bowl game, he's on pace to rush for an absurd 2,041 yards. While he probably won't reach that number, I'd feel safe if I answered over.

Analysis: Gabbert has only five touchdown passes in four games. He needs 20 TD tosses in the rest of Mizzou's games to beat the spread. Assuming the Tigers reach a bowl game, Gabbert would have to average 2.2 TD passes in the final nine games. This one could get close. 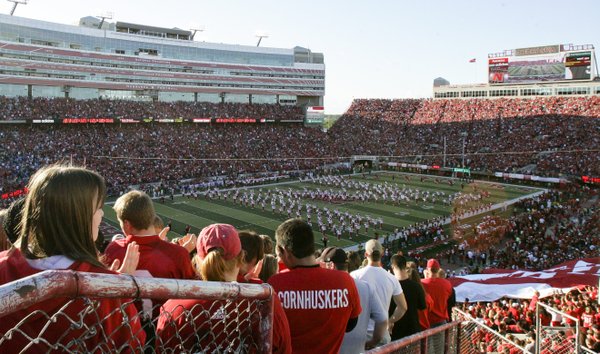 Analysis: The Huskers are 4-0 and looking pretty good to reach 11 wins. Nebraska will have 12 regular season games, a bowl game and possibly an appearance in the Big 12 Championship. The Huskers could go 11-3 and reach the win total.

Analysis: Broyles, at 103.6 yards per game, is on pace to rack up 1,346 yards this season. If the Sooners play in the Big 12 Championship, that number will go up even more. If he avoids injury, the over is looking good.

Question 8: Interceptions by the Texas defense. Line set at 20. Over/under?

Analysis: Texas has only three interceptions this season in five games, after picking off 25 (tops in country) last season. Hope you took the under.

Question 9: Passing touchdowns by all Texas Tech quarterbacks in 2010. Line set at 35. Over/under?

Analysis: Taylor Potts has thrown every TD pass for the Red Raiders this season, and he has 12 through four games. He's on pace for 36 without a bowl game. If Tech turns around its season — there's still time — and makes a bowl, I like the over's chances. 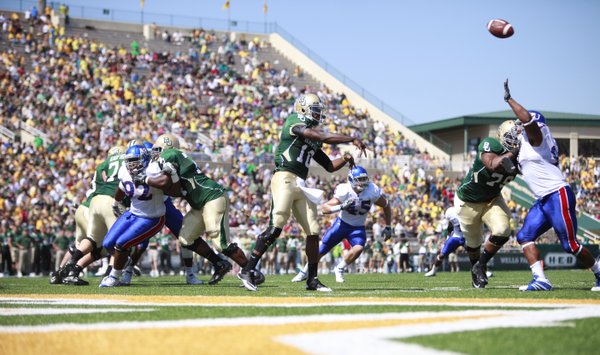 Analysis: Griffin has passed for 1,351 yards and rushed for 221 yards through five games. His all-purpose total is 1,572 yards, with an average of 314.4 yards per game. He's on pace for 3,772.8 total yards without a bowl game. Of course, with Big 12 competition looming, expect the number to be lower. Still, I'd feel confident if I picked the over.

Tiebreaker question: How many yards will KU running back Toben Opurum rush for in 2010?

Analysis: Not much to this one. In the event of a tie, whomever picked the lower number of yards will win.

How are you guys doing on the questions?

Well since Toben and then Pick were a big part of this contest, I say we have a do-over.

Haha, I'd say so... not exactly a riveting contest for any Kansas fans.

Looks like KU should just put their fastest players in the backfield and run for 70 yds per attempt like NU did to KSU. Easy victory after what we saw on Thursday?