Who should be next coach at Colorado after Dan Hawkins? ChatterTV Big 12 week 11 picks

With the news earlier this week that Dan Hawkins got the boot at Colorado, I began searching the Web for possible replacement candidates for the Buffaloes' next head coach.

Colorado fired Hawkins on Tuesday after a five-year stretch of no winning seasons and a 19-39 overall record. The Buffaloes went to one bowl game in his time in Boulder and never finished higher than third in the Big 12 North. http://www2.kusports.com/users/esorre...

There was a decent chance the Buffaloes would part with Hawkins after this season. Kansas expedited the process, however, last weekend, when the Jayhawks erased a 28-point deficit in the fourth quarter, scored 35 unanswered points and beat Colorado, 52-45. Of course, KU hadn't won a Big 12 game this season before the comeback. That was the final straw for Hawkins.

Some possible replacements for Hawkins I came across made sense. Others, not so much.

When realistically thinking about a replacement, keep the following in mind: Hawkins' buyout was $2 million, and the CU athletic department isn't exactly raking in the dollars right now. CU athletic director Mike Bohn, a KU alum, said it's unlikely the successor would make more than $2 million per year. Hawkins made $1 million per year.

Right there, I was able to cross a few names off the list of rumors I saw online.

First, Les Miles. I don't think so. Yes, he was the offensive line coach at Colorado from 1982-1986, but why would he consider leaving LSU for Colorado? Plus, the guy makes $3.8 million per year at LSU. Next, please.

Jon Gruden (current ESPN commentator, former Oakland Raiders and Tampa Bay Bucs head coach), same kind of deal. Would cost too much. Plus, should Gruden want to get back into coaching, the Dallas Cowboys are looking. That opportunity seems a bit more attractive.

Another name that naturally pops up when coaching vacancies arise is former Texas Tech coach Mike Leach. Again, not too sure if CU has the dollars to offer Leach, who signed a five-year, $12.7 million deal in 2009, but was fired last season in the wake of allegations he mistreated Tech receiver Adam James. Plus, it seems Leach is enjoying his life in Key West, Fla., right now. Who the heck wouldn't?

Want a front-runner? Right now, it could be Bill McCartney, who coached at Colorado from 1982-1994. McCartney led Colorado to its only national title in football in 1990. He was 93-55-5 at CU and made a bowl game in nine of his 13 seasons. Only thing is, McCartney hasn't been involved with football since he retired from coaching in 1994. He's currently 70 years old. Could he make like Kansas State's Bill Snyder (age 71) and revive the CU program?

Another name that makes sense is Mike Bellotti, the winningest coach in the history of Oregon football. Bellotti currently works as an ESPN college football analyst. Before that, he coached at Oregon for 14 seasons (1995-2008) and was the Ducks' athletic director from July 2009-March 2010. With Colorado bolting the Big 12 for the Pac-12, as it will be called next season, Bellotti's experience in the Pac-10 and his ability to recruit on the West Coast would be a benefit. Bellotti made slightly over $1.9 million in his last season in 2008, so he appears to barely be in CU's range.

Brian Cabral, the interim head coach at Colorado for the last three games this season, must be seriously considered. What if he ignites a sudden spark with CU that wasn't seen at any point this year under Hawkins? It's not like Cabral is new to coaching. He's been the Buffs' linebackers coach for 21 years. He played at Colorado from 1974-1977. He won a Super Bowl ring with the Chicago Bears in 1985. Cabral deserves a shot.

A name that KU fans will obviously follow is Mark Mangino. 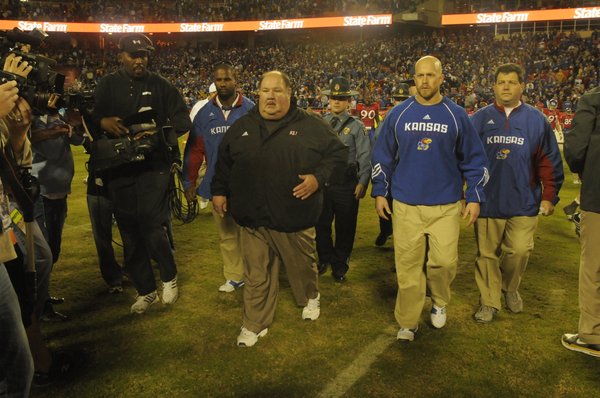 In a teleconference with local reporters on Thursday, Colorado chancellor Phil DiStefano said he wants "a coach who is either successful now as a head coach or has recent coaching experience either with someone from the Pac-12 or the Big 12,” according to the Denver Post. That may put former KU coach Mangino in the conversation and eliminate some others. Mangino was mentioned by NBC college football blogger John Taylor as a possibility.

Searching for a coach was something KU fans thought about for quite some time last year before Turner Gill was hired on Dec. 13, 2009.

Who do you think is the right hire for CU?

And last but not least: For my Big 12 picks in week 11, check out the latest episode of Conference ChatterTV below:

A plus would be a coach who knows the Pac-10/12. Mangino gets lost west of Durango.

haha im just looking at that photo of mangino... a 39-41 loss to Mizzou is looking kinda good right now.... im feeling blowouts the rest of this season....

Do you think you could find Colorado on a map?

I'm still shocked no one has given Venables a shot. He's been part of some really successful teams and one of the best recruiters in the nation. PLus, at this point I'm sure he'd come cheap. He could probably ask Mangino to be his OC too since they use to work together at OU.

I think Brent Venables has an albatross around his neck ... something about someone's (possibly) underage daughter?

Can't remember if it was the athletic director or chancellor.

There's either a grain of truth in that or it's a very pervasive rumor, because I've heard whispers about it from quite a few unrelated sources.

Something tells me that Mangino won't do well at altitude.

Who cares?! By the time the replacement is hired, Colorado will not be in the Big 12!

You're comments are SO funny. I really enjoy them.......please keep posting the same sort of comment over and over and over. Please! They never get old!

What the Buffs need first of all is someone who really WANTS THE JOB. CU wouldn't poke Mike Leach with a stick. I think Mangino is in the same column. Kevin Sumlin would be too good to be true. If they find a way to win two games the job goes to Brian Cabral. Otherwise, call Eric Bieniemy and hope he brings lots of new assistants.

Looking for a coach? How about the "Div. II offensive assistant coach, someone we'll just call "Coach." " guy from Newell's post on this site? :-) I love his analysis of the football games so far!