Bill Self looking for more inside from Billy Preston 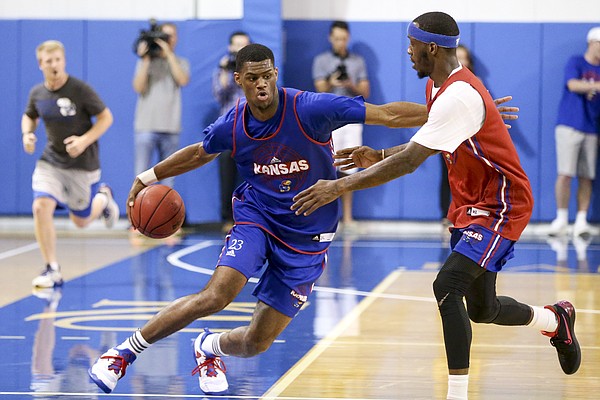 Blue Team forward Billy Preston goes behind the back as he makes a move against Red Team guard Tyshawn Taylor during a scrimmage on Wednesday, June 7, 2017 at the Horejsi Family Athletics Center. by Nick Krug

Playing for the Crimson squad in the scrimmage, the 6-foot-10 freshman had his moments. He knocked down a pair of three-pointers and flashed a couple of solid dribble moves.

So what’s the issue?

“I said he could be (a lottery pick). There’s no question he could be,” Self said. “But you know, him playing away from the basket is obviously not going to help his stock.”

Preston scored nine points on 3-for-7 shooting in the scrimmage. He led his team with six rebounds and also notched a block on a Mitch Lightfoot three-point attempt.

There were some bumps and bruises — like when he fouled Devonte’ Graham probably a little too hard for a Late Night scrimmage or wiped out attempting a putback dunk and ended up on his back — but there were several moments of comfort, too, like when he flashed a smooth floater early on and a quick spin off the bounce to draw a foul.

“You can see even in the little bit of bad ball tonight that he’s really skilled,” Self said. “If he’s able to put it all together, there’s not many guys out there more talented in the freshman class.”

Senior guard Devonte’ Graham echoed that sentiment, noting Preston appeared more confident on the floor on Saturday than he was throughout the summer. Graham added that he’s stayed on the freshman about being aggressive and staying in attack mode — "not hesitating," as he put it.

But let’s address the elephant in the room.

One name that wasn’t spoken by any of the coaches or players on Saturday was that of Carlton Bragg, who transferred to Arizona State following a tumultuous year on and off the court.

At a listed weight of 240 pounds, Preston is bigger than Bragg was as a freshman. He’s also projected to show more on the inside and should have less of an issue adjusting to that type of role, though it will take some time.

Self also said on the Late Night broadcast he is comfortable with Preston shooting about two threes per game, so he isn’t trying to completely go away from Preston's guard-like skill set.

Still, to find an example of the warning Self issued, you don’t have to look far.

“(Bragg) is just adjusting his game, knowing that he’s very talented outside, but that we need him every now and then, depending on match-ups and personnel in the game, to step inside,” Lucas said. “Coach knows what he wants from him, and I’m sure during these next couple of weeks of practice he’ll make sure that Carlton’s on the same page.”

And here's one from Self in January:

“There's no question C.B. may say that's the way he thinks,” Self said. “But that's not in his core. He's always been a guy that scored the ball pretty easy and shot a lot of jumpers and those sorts of things, which is fine. There's nothing wrong with that.”

Here was Self's response, in full, the first time he was asked specifically about Preston:

“I said he could be (a lottery pick). There’s no question he could be. He’s big. He’s 6-foot-10. You can see even in the little bit of bad ball tonight that he’s really skilled. He can put it down. He’s an above average passer, but he’s a pretty good shooter. Got range, but, you know, him playing away from the basket is obviously not going to help his stock because he’s got to be able to rebound his position. And that’s the thing that he’s got to do. He can play facing, but he’s got to be able to score back to the basket, and he’s got to be able to rebound in traffic. Those are things that will determine whether or not he’s able to be what you mentioned. But if he’s able to put it all together, there’s not many guys out there more talented in the freshman class.”

“...Dedric Lawson didn’t get within 10 feet of the paint. Billy Preston didn’t either. You’re never going to win that way.”

“We should be a good shooting team. I think there’s a lot to like, it’s just there’s not much depth. You just don’t know if you’re going to have an inside presence on both ends. But I think we can get our guys to do that.”

It never worked for Bragg. Then a sophomore, the former five-star recruit was taken out of the starting lineup early in the year and never looked comfortable when he had to fill in at the five.

It may or may not work with Preston — only time will tell.

But if there’s one thing that might help his cause, it’ll be heeding the words of Self and Lucas last year, or even those of Graham on Saturday. After all, the message really hasn't changed that much over time.

“He’s just got to get the feel for what coach likes,” Graham said. “And we’ve got practice Tuesday, so (he’ll) get it started.”

You can lead a horse to water but you can't make him drink. Evidently Preston prefers the outside rather than the inside play. Self needs him to play inside be interesting to see if that will work out. The most popular style of play in the pros is outside play and that includes some that are as tall as Preston. Keep the inside open so driving for dunks or drain the treys. Golden State is a great example.

Agreement here. There is less and less posting up in the league. A 6-10 guy with a handle and an outside shot is really valuable as is. Self is now a Hall of Famer, and I am not, but I would love to see someone like Preston continue to improve what he does well. An athlete like Preston, with confidence and a bit more polish on his existing skills, could be the one to get hoops when we really need them like two years ago against Villanova when they collapsed on Ellis and the offense went south. Of course, he will have to play hard and rebound on defense to have a spot.

If he can't dribble drill like curry then he has no business being on the outside. Tons of players can shoot, not many can think enough to stay inside without a lane violation and get 15+ rebounds.

It takes time to get adjusted to college games for Billy, but if he studies Wilt's games, and if he's will to bang inside a bit, he'll earn starting spot as starter. With Cormack on his side, he didn't have to do a lot of those in high school, I guess.

HCBS has a valid concern, we haven't been rebounding well or boxing out opponents for the past 3-4 years, based on a short glance on our team stats out there. As you're aware, rebounding is different than shooting drills. These guys have to develop their reflexes well. We've got more players with perfect bodies now, we should be able to improve rebounding margin this season.

If Preston cannot figure it out playing at the college level he can forget the NBA. He may play professionally in Chechnya or Albania.

Billy doesn't need to dribble like Curry to have a place outside but he better recognize that Draymond does a lot more than shoot 3's. I was going to say a lot of dirty work but in Draymond's case that could lead to a lot of actions Coach Self isn't interested in seeing. Let's call it instead the gritty work.

Easy fix. You grab some electrical tape, use it to tape a 12 foot arc around the basket, and you tell Billy, "Billy, you step outside this arc, you owe me a suicide drill + 20 pushups."

I will check back in April, but if Self tries to make him into a mostly inside player it will be another case of unfulfilled potential for a KU big man. He'll lose confidence and be confused half of the time. His skill set is beyond the Morris twins, Robinson, Withey, etc, but I don't know if he will get a chance to use it here. Bragg and Diallo didn't exactly work out. I hope I'm wrong. I'll either gloat or eat crow in April.

You're both right and wrong :) With Billy's skills, playing in big man position will only make him more lethal. Because on offense, he can move much faster out, drawing his defender away from the basket when needed or doing spoof post move and hit jumpers or step-backs easily - well, I'm assuming the coaches agree here.. Moving around the basket down low is another story. Perhaps he can learn from big Dok. Defense is where he will be needed around the basket and boxing out real tight.