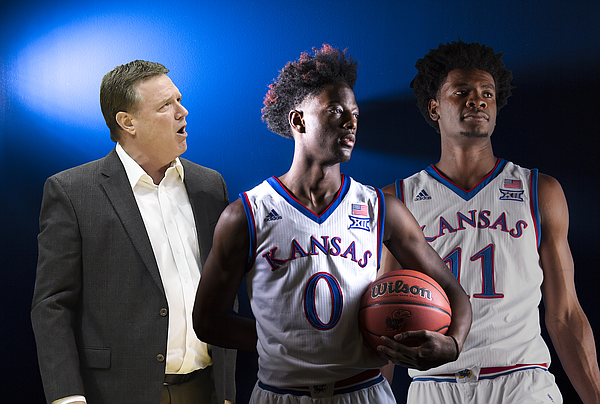 For a Kansas basketball freshman, no descriptor should carry more weight from Bill Self than the word “tough.”

It’s a word the KU coach doesn’t throw around. Players have to earn it. Self assigns it far less frequently than a word representing the opposite — soft — which he can be heard shouting in disgust from the sidelines of games and practices, usually with a matching facial expression.

In that regard, Marcus Garrett fits the mold of one of Self’s favorite freshmen. The raw materials are just a little different.

“Marcus is going to be a really good player,” Self said. “I think he’s one of our tougher guys.”

Now press pause and jump back a year.

Josh Jackson’s days were numbered from the moment he stepped on campus.

Everyone knew he was a one-and-done and likely top-five NBA draft selection, despite what the swingman said, asked about that very topic in a press conference in February.

At the very least, the Big 12 coaches had a pretty good idea of Jackson's future. That included Self.

“We had a 6-8 guard that could rebound and block shots and defend, and he wasn’t a normal guy,” Self said of Jackson. ‘He was a guard, but he could do anything. And he was a matchup nightmare for others.”

Garrett can, however, replicate some of the things that made Jackson what he was. His Allen Fieldhouse debut was a step in the right direction.

The do-everything, hybrid guard-wing-whatever-he-is was asked to play the four, as well as in the backcourt. Garrett defended in the post and on the perimeter. He both threw and received inbounds and outlet passes. He didn't let a veteran opponent take advantage of him.

Defensively, Garrett was tested. Several Pittsburg State players tried to go at him, to varying success.

Late in the first half, Demetrius Levarity received a pass on the right wing. He tried a hesitation dribble to get by Garrett. Then he spun back to his left to attempt a hook over his right shoulder. Garrett forced a tie-up and then ripped the ball away.

One possession later, Garrett was hounding Jabari Antwine. Antwine was trying to get the ball into the post, where the 6-foot-7 Levarity was being guarded by 6-foot-2 Devonté Graham.

Garrett’s activity forced the Gorillas to look elsewhere. They ended up getting called for a shot-clock violation.

“He gets his hands on a lot of balls. That’s what he does,” Self said. “He’s not going to be a guy that’s going to average double figures as a freshman. But he can be a guy that can steal us a lot of extra possessions.”

And yet, there are still the moments that will drive his coach crazy.

With just over two minutes to play in the first half, Garrett trailed Graham up the court.

Graham passed Garrett the ball and he shot a contested 3. The ball didn’t move from side to side, a staple of not only Self’s offense, but also that of Garrett’s former coach. The possession lasted seven seconds.

Earlier in the first half, Garrett poked a ball away. Rather than passing it to an open Mykhailiuk, who was running up the floor, he began to dribble.

Garrett turned it over and Billy Preston had to step in and take a foul to stop a layup. Self screamed in frustration from the bench.

In those moments, the freshman looked like a freshman, as compared to the “freshman, but he’s not really a freshman” Self had a year ago.

“Maybe the biggest dog in college basketball as a freshman last year,” Self said of Jackson. “I mean, he was an assassin.”

The good news for Garrett is that he doesn’t need to be just yet.

It’s unlikely Garrett will play a meaningful minute this season without two of Graham, Mykhailiuk, Malik Newman and Lagerald Vick on the floor, meaning his developing 3-point shot won’t need to come around overnight.

For now, Garrett can play his way. That means straight-line drives to the basket to draw fouls — he shot a game-high eight free throws — and a little bit of everything else, like the five rebounds (two offensive), three assists, one steal and one block he tallied against Pittsburg State.

By the time he’s an upperclassman, though, would it shock anyone if these words that Self spoke of Jackson last year were being spoken about him?

“God, did he play good. I mean he played good. He showed America tonight that’s about as versatile of a player as there is in the college game.”

Why doesn't Self red-shirt him?

John, we just have 8 scholarship players right now. You don't red-shirt a guy and take that down to 7.

Any red shirt in Garrett's future would have to be Sophomore or later years. KU needs the bodies this year. Particularly for two WVU foul fests coming up.

Bill's M.O. is to let the freshman play his first year, get a feel for what is needed to excel while discovering what areas of his game need to be improved to reach that level then let him red shirt his Soph year and work on those attributes.

Then as a R.S Soph he has three years of varsity competition to grow into a starter. Remember, next season Bill will have a ton of big men plus Moore, Conliffe maybe Vick and the two five stars [assuming Grimes is a done deal] so the need for the three or four guard line up won't be nearly as great as this upcoming season.