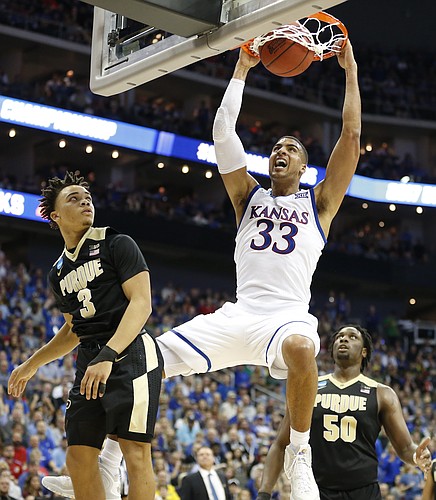 Kansas City, Mo. — In the first half of Thursday’s Sweet 16 matchup at Sprint Center, everything was going to plan for Purdue except in one spot.

Kansas had an edge in rebounding, which led to an edge on the scoreboard.

It didn’t matter that the Boilermakers were shooting the ball well and forcing the Jayhawks into some tough shots. The Jayhawks kept scoring off of their own misses until they eventually stopped missing in a 98-66 victory to advance to the Elite Eight.

Purdue’s trio of big men, 6-foot-9 Caleb Swanigan, 6-8 Vincent Edwards and 7-2 Isaac Haas, combined for 37 points and 13 rebounds — a big drop from their output of 55 points and 25 rebounds against Iowa State in the second round.

The Jayhawks out-rebounded the much taller Purdue, 36-29. Freshman Josh Jackson had a game-high 12 boards (four offensive).

“Those guys, especially Caleb on the glass, it's hard to keep 'em off,” Kansas coach Bill Self said. “If you look at Landen (Lucas’) stats he only got four rebounds, but the story is Caleb only got seven. And if you had told this before the game that would be the give and take I would have sold out for that because he does a really good job of making sure neither one of them got it for the most part.”

Swanigan’s seven rebounds were his second-lowest total this season — and only the seventh game he failed to record a double-double.

“I would say if you look at the threes that were taken, 55 3's were taken in the game, so it ends up being longer rebounds and a lot of times it's being quick to the basketball and opportunistic,” Purdue coach Matt Painter said.

Off of 12 offensive rebounds, the Jayhawks scored 16 second-chance points, their most since an overtime, home loss to Iowa State on Feb. 4.

KU has won the rebounding battle in seven of its last eight games, the only exception being a Big 12 Tournament loss to TCU without Josh Jackson available because of a one-game suspension.

“Our defense and rebounding and everything was good the second half,” Self said, “and, of course, we made a ton of shots and that always helped.

“Obviously, Dwight bought us a ton of minutes whenever Landen was in foul trouble. But I thought Carlton came in and did a good job, too. You add those guys together you get 23 key minutes out of that position when Landen can't be in the game. So I think they both kind of bailed us out.”

Entering Thursday, the Boilermakers (27-8) had a 6-4 record when they were out-rebounded by an opponent.

“We've been able to dominate the boards in our first two games and (Kansas) did a good job on the glass,” Painter said. “Seemed like every time they got an offensive rebound they made us pay and every time we turned it over they were so fast in transition of going the other way and converting. Hats off to them. They played a great game.”

Getting to know: Purdue 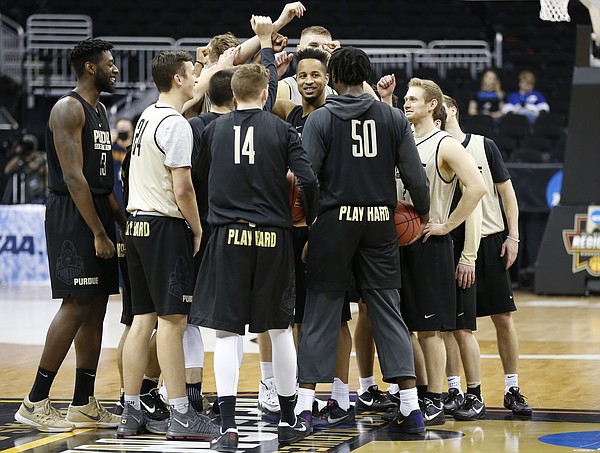 The Purdue Boilermakers come together at half court after a practice on Wednesday prior to Thursday's game at Sprint Center in Kansas City, Mo. by Nick Krug

Back in the Sweet 16 for the first time since 2010, Purdue’s basketball team has its eyes set on improving on one of the best seasons in school history.

The Boilermakers, known for all of their size, will tip off against top-seeded Kansas around 8:40 p.m. Thursday (CBS) at Kansas City’s Sprint Center.

“We have confident players,” Purdue coach Matt Painter said. “We have some guys that can really shoot the basketball.”

Series history: Kansas leads 3-2. The last three meetings have been in the NCAA Tournament, including KU’s 63-60 win in the second round of the 2012 tourney. 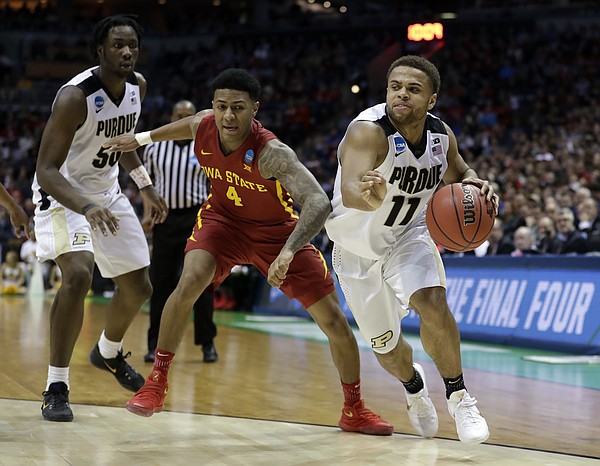 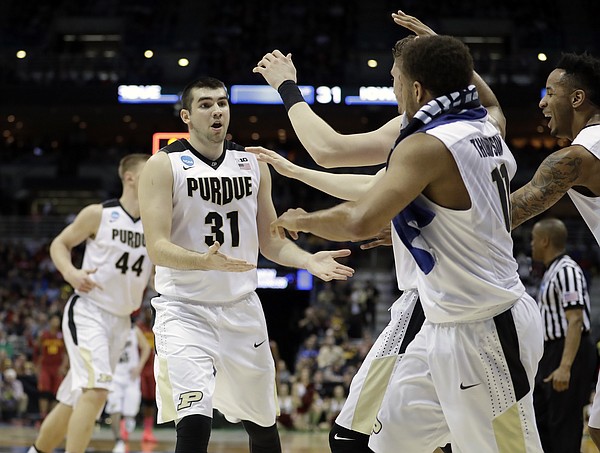 Purdue's Dakota Mathias (31) celebrates with his teammates during the first half of an NCAA college basketball tournament second-round game against Iowa State Saturday, March 18, 2017, in Milwaukee. 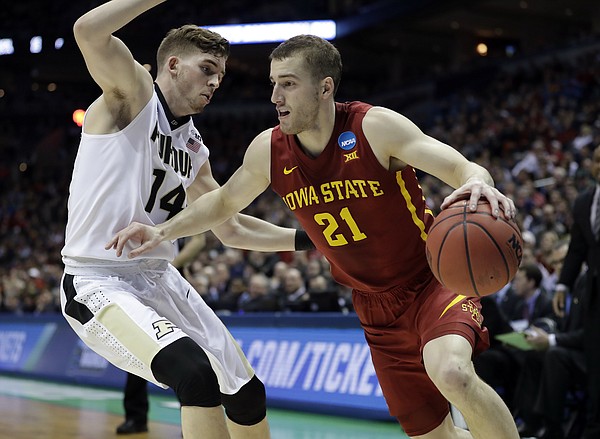 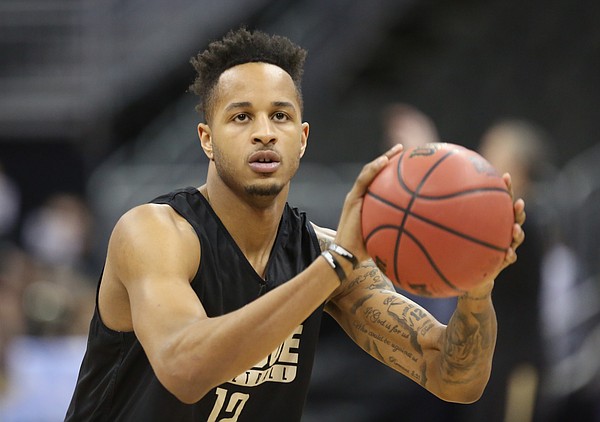 Purdue forward Vince Edwards (12) pulls up for a shot during a day of practices and press conferences prior to Thursday's game at Sprint Center in Kansas City, Mo. by Nick Krug 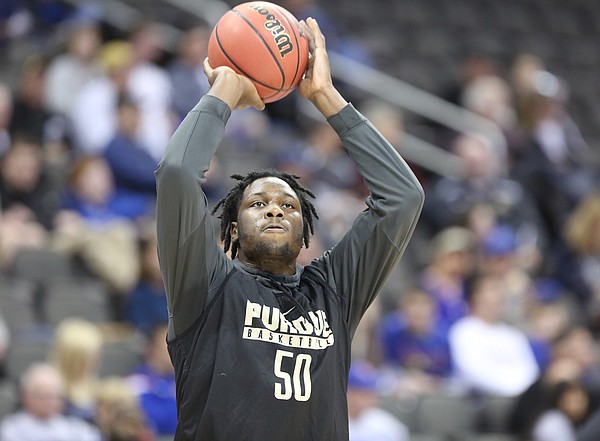 Purdue forward Caleb Swanigan (50) pulls up for a shot during a day of practices and press conferences prior to Thursday's game at Sprint Center in Kansas City, Mo. by Nick Krug

Purdue center Isaac Haas (44) hooks in a shot during a day of practices and press conferences prior to Thursday's game at Sprint Center in Kansas City, Mo. by Nick Krug

Landen Lucas on facing Purdue’s height: ‘We match up fine’ 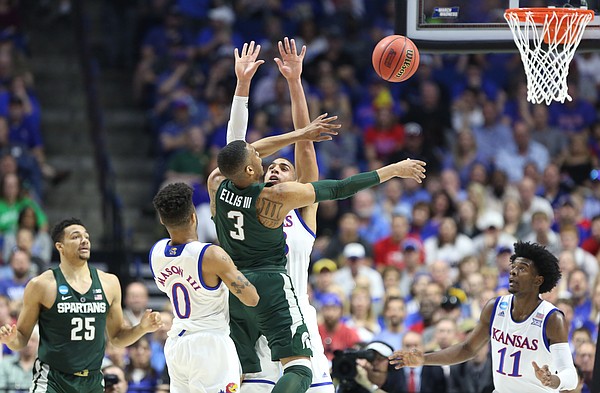 Michigan State guard Alvin Ellis III (3) loses the ball while defended by Kansas forward Landen Lucas (33) during the first half on Sunday, March 19, 2017 at BOK Center in Tulsa, Okla. by Nick Krug

There’s no secret when it comes to Purdue’s style of play. There’s plenty of height and the Boilermakers like to make the most of it.

Swanigan is more than your prototypical center. He fights for every inch in the paint and he’s capable of drilling shots from the outside, connecting on 43 percent of his 3-pointers this season. He’s even a 78.5 percent shooter at the free-throw line.

But facing talented post players is nothing new for the Jayhawks, and they are confident it won’t be as big of a mismatch as it looks when they stand next to each other.

“I think we match up fine,” Kansas senior center Landen Lucas said. “We have played big teams before in our league. We play big teams all year. So it is nothing new for us and we are looking forward to the challenge.”

The Jayhawks will try to combat Purdue’s height advantage with their versatility in the post featuring the 6-10 Lucas and 6-8 Josh Jackson, with 6-10 Carlton Bragg and 6-9 Dwight Coleby off of the bench.

Swanigan, Edwards and Haas all average more than 12 points and five rebounds per game, and the trio combined for 55 points, 25 rebounds and 11 assists in Saturday’s 80-76 win over Iowa State.

The Jayhawks watched most of that game waiting for their own matchup against Michigan State’s star freshmen forwards on the following day.

“I was really impressed because, when you think of it right now going into it, I mean, they've got some guys that we haven't seen down low yet,” KU coach Bill Self said. “We haven't gone against an inside presence scoring like Caleb and of course the big fellow off the bench. We recruited him, and he's a load.”

Along with a strong frontcourt, the Boilermakers (27-7) are smart with the ball. They rank second in the country in assists per game (18.3) only trailing UCLA.

In their win over Iowa State, they had an incredible 27 assists on 31 made baskets — “There's nobody that would execute in the half-court or share the ball any better than that,” Self said.

Junior point guard P.J. Thompson ranks second in the nation with a 4.25 assist-to-turnover ratio, only behind Monte Morris, who he matched up against Saturday.

“We’ve got to come up with a way to eliminate post touches and still get to their shooters because they can stretch it from all the spots to the perimeter,” Self said.

The Boilermakers didn’t know if they’d be playing Kansas or Michigan State after Friday’s win, but they knew there was a chance they would be entering a tough environment in Kansas City, Mo.

Playing at the Sprint Center should give the Jayhawks as close to a home-court advantage as possible in the NCAA Tournament, and the Boilermakers will do their best to use it to motivate themselves.

"We enjoy playing on the road," Purdue guard Dakota Mathias told the Lafayette Journal & Courier. "We like all the boos and the hatred coming towards us. We've won in a lot of hostile environments, a lot of big-time places, so this isn't going to be any different.”

Haas added: "You draw energy from that. That’s what makes basketball fun. I look forward to stepping on that court and hopefully making them silent.”