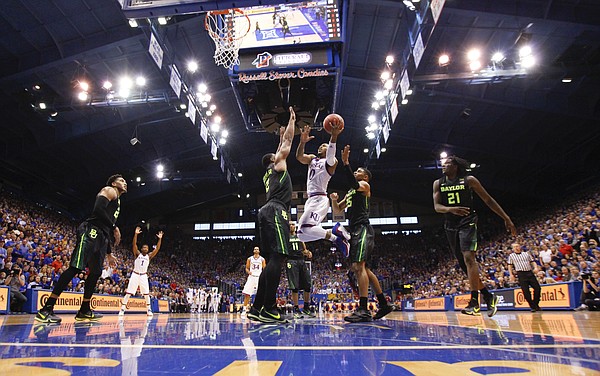 Kansas guard Frank Mason III (0) hangs for a shot between Baylor forward Rico Gathers (2) and guard Al Freeman (25) during the second half, Saturday, Jan. 2, 2016 at Allen Fieldhouse. by Nick Krug

On the first day following the end of the college football season (and another title game classic), college basketball reintroduced itself with one of its biggest days of the season.

With three top-15 matchups (and of course, another Grayson Allen mini-controversy), it was easy to get lost in all of the hype. That’s where this blog comes in with the latest look at the blue bloods across the country. Here’s a look at the top 10 teams:

How about Sagaba Konate swatting this Johnathan Motley dunk? pic.twitter.com/pdIHvk7SVO

None by Chris Stone

Baylor earned its first No. 1 ranking in program history and was destroyed in a 21-point loss against West Virginia in Morgantown. The Bears started slow and never recovered, turning the ball over a season-high 29 times — only two shy of a school record. "They just took us out of everything," Baylor coach Scott Drew said. "We weren't overconfident. They just kicked our butt.”

Of course, this doesn’t diminish everything Baylor accomplished on its way to a No. 1 ranking. The Bears were a five or six point underdog heading into Tuesday’s matchup. Prior to the loss, Jonathan Motley was named Big 12 player of the week after posting back-to-back double-double performances. And just as remarkable is the rise that Scott Drew has brought the Baylor program within the last decade.

Frank Mason had a night! #kubball

Stat of the day: Frank Mason is making 54.9 percent of his 3-pointers this season. He’s one made 3-pointer shy of qualifying on the national list, but he would rank second in the country. In his last three games, Mason is shooting an astounding 12-of-15 from deep (80 percent). Benton Smith wrote about KU’s 3-point prowess on Wednesday afternoon.

In a story from Matt Tait, KU coach Bill Self argues that the Jayhawks don’t deserve to be the top ranked team in the country following their 81-70 road victory at Oklahoma.

Villanova was expecting a dogfight against Xavier and it ended in a smack down. The Wildcats won 78-54, matching a school record with their 46th straight win at the Pavilion — their last home loss was in February 2013. “The annual Villanova ass kicking. I'm getting really tired of it,” Xavier coach Chris Mack said afterward.

The Wildcats held Xavier to 29-percent shooting from the floor, including 6-of-32 from deep. Kris Jenkins and Josh Hart both scored 20 points apiece. ESPN’s Dana O’Neil wrote a story on Jenkins becoming a more complete player this season, which has only made the guy who made “The Shot” even better.

After losing on a buzzer-beating 3-pointer from Dillon Brooks on the road at Oregon, the Bruins have responded with three straight wins, including a 14-point home win over Stanford on Sunday. Perhaps the only concern for the Bruins is a couple of second-half letdowns. It hasn’t cost them a win, but they’ve had to sweat at some points in games they should’ve put away.

Bryce Alford, known more for being a coach’s son than star player, is actually climbing up the school record book in career points. He’s averaging 16.3 points this season and could put himself inside of the top five of a historic program. “Those people who say those negative things about me, that I play just because my dad’s here or whatever, I’m not going to be able to change those voices regardless of what I do,” Alford told the LA Times in a story about his success.

Gonzaga owns wins against Florida, Iowa State and Arizona, but there will always be those who don’t believe the hype until the Zags reach the Final Four. But perhaps, the toughest task to keeping their perfect season alive — the last unbeaten team in the country — will be Saturday’s upcoming matchup against No. 21-ranked St. Mary’s. They lost both regular season games against the Gaels last year.

The Zags earned a 15-point road victory against San Francisco last week, then had a game against Portland postponed because of a winter storm. The Spokane Spokesman-Review had a nice story on freshman Zach Collins, the next forward in a strong pipeline of talented big men.

Record: 15-0. Next: Thursday vs. Loyola Marymount.

None by Kentucky Basketball

There’s always a few SEC games that give the Wildcats some trouble and Vanderbilt nearly gave them everything they could handle Tuesday, before Kentucky pulled away in the final minute for an 87-81 win. Isaiah Briscoe scored a game-high 23 points while De’Aaron Fox added 22. "We still don't trust each other because guys aren't doing their job defensively, what they're supposed to do," UK coach John Calipari said.

The Wildcats added Hamidou Diallo on Wednesday, a 5-star recruit that was ranked highly in the Class of 2017. He enrolled at Kentucky and will practice with the team but is expected to redshirt for the remainder of the season. Diallo, who was playing at a post-graduate school, is eligible for the upcoming NBA draft, but all indications say he will play at Kentucky next year. Will this be a new trend for some college basketball players?

Playing without Amile Jefferson (foot injury), the Blue Devils didn’t have much of a post presence in an 88-72 road loss at Florida State. That seems weird to say when a team has star freshmen Harry Giles and Marques Bolden, along with sophomore Chase Jeter, but none of them proved to be ready for the big stage. Giles and Bolden combined for five points and two rebounds in 14 minutes. "Obviously, size they can throw it up there and hurt you on the glass. They throw guys on you and wear you out,” interim coach Jeff Capel said.

As briefly mentioned above, there was another faux Grayson Allen controversy when he dove after a loose ball into Florida State’s bench, and he appeared to shove an assistant coach as he fell down. Apparently trying to catch your balance is the same thing as tripping now. Of course, Allen is going to be under extra scrutiny because of his tripping incidents, but it’s time to put down the pitchforks. Dennis Gates, the FSU assistant coach, said Wednesday that it was simply a great hustle play, “nothing more, nothing less.”

None by Creighton Basketball

After a 10-point home loss against Villanova on New Year’s Eve, the Blue Jays get another chance to make a statement — this time against No. 12-ranked Butler. Creighton rolled to a 14-point road win over Providence last weekend behind an 11-point, 14-assist performance from point guard Maurice Watson.

But beyond Watson driving the Ferrari that is Creighton’s offense and the scoring from Marcus Foster, the Blue Jays are receiving a lift from 7-foot freshman center Justin Patton, who is averaging 14.3 points and 6.5 rebounds. And it appears, from this Omaha World-Herald column, that has landed in the discussion for a potential lottery pick.

If it wasn’t for another Grayson Allen controversy, maybe people would take notice of this Florida State team, which is no longer under the radar. The Seminoles, who own ACC wins over Duke, Virginia Tech and at Virginia, won’t get to celebrate for long with a looming road matchup at North Carolina.

But in the top 10 rankings for the first time since 1993, the Seminoles felt that they had something to prove in their 16-point home win over Duke, their first sellout at the Tucker Center since 2013. "This one was personal for me. Ever since he did that, I've been waiting a long time to see him again," said Xavier Rathan-Mayes, who scored 21 points and was actually tripped by Allen last year. "It was good to finally see him again."

None by WVU Men's Basketball

Press Virginia came to life Tuesday, forcing 29 turnovers in a 21-point demolition over top-ranked Baylor. According to KenPom, West Virginia entered the game forcing opponents to turnovers on 32.8 percent of possible possessions, the highest number ever recorded. And that was before Baylor had 16 turnovers in the first half and West Virginia turned a close game into a laugher.

“Press Virginia is for real,” said Baylor guard Jake Lindsey. “They do a good job executing and knowing our personnel and they come at you in waves.”

Three teams trending up
1. Minnesota: After opening Big 10 play with a one-point overtime loss to Michigan State, the Golden Gophers have won three straight, including road games at Purdue and Ohio State. They have a talented backcourt with Nate Mason and Amir Coffey.
2. Oregon: On a 13-game winning streak, the Ducks have opened Pac-12 play with wins against UCLA, USC, Washington and Washington State. Three of those victories are by at least 19 points.
3. Nevada: If you missed it, Nevada completed one of the biggest comebacks in college basketball history. The Wolf Pack rallied from a 25-point deficit for a 105-104 overtime win at New Mexico, their first win at the Pit in school history. Nevada trailed by 14 with less than 70 seconds left.

Nevada Wolf Pack sets NCAA record for largest deficit overcome with less than 5 minutes on clock. Here is how: pic.twitter.com/P41F7d7CZo

None by Nevada Basketball


Three teams trending down
1. Georgetown: The Hoyas beat St. John’s on Monday, but they opened Big East play with an 0-4 record, the first time they’ve done that since 1998-99.
2. Michigan State: Facing Penn State in Philadelphia, more than 200 miles from campus, the Spartans didn’t play well in a 9-point loss at the Palestra on Saturday with 17 turnovers. Tom Izzo called it an “effortless approach.”
3. Virginia Tech: After demolishing Duke on New Year’s Eve, the Hokies couldn’t take advantage of any of that momentum with blowout road losses to North Carolina State and Florida State.
Reply