Charles Barkley: Bill Self never gets the credit he deserves 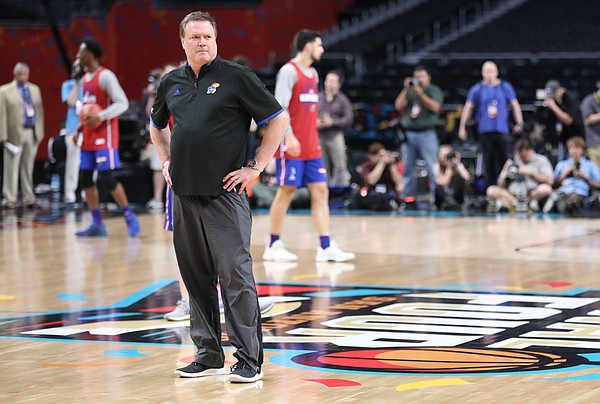 Kansas head coach Bill Self watches over the Jayhawks' practice on Friday, March 30, 2018 at the Alamodome in San Antonio, Texas. by Nick Krug

San Antonio — When Charles Barkley looks around college basketball, one of the most impressive feats that stands out to him is the Kansas basketball program’s streak of 14 straight Big 12 titles.

Considering the one-and-done era, all of the transfers and just the challenge of staying consistent, Barkley believes coach Bill Self deserves more credit than he’s received across the country.

It’s not that Self hasn’t been recognized for his achievements. He was inducted into the Naismith Hall of Fame in September. But Barkley, never one to shy away from sharing his opinion, respects the way he coaches and is amazed at all of his success.

“As great of a coach as (Kentucky’s John) Calipari is, he’s not as consistent as Self has been,” Barkley said. “What he’s accomplished is incredible. They’re both great coaches, but I just don’t think (Self) gets the credit he deserves.”

Barkley said he doesn’t know Self well, but he’s a fan of the way he talks to players without sugarcoating anything. Self called the Jayhawks “soft” after a couple of losses this season.

Blaming a “corrupt AAU” system for hyping up players, Barkley says it’s a reason there are so many transfers across college basketball.

Said Self in an earlier press conference Friday: “You know, I guess our society has changed a little bit. Stating the obvious, I don't think, is really calling anybody out, because to be honest with you everybody could see what I saw.”

Barkley, who is predicting a Villanova win over Kansas in Saturday’s semifinal, is intrigued by the battle between All-American point guards Devonte’ Graham and Jalen Brunson.

The NBA on TNT analyst doesn’t believe the two point guards will guard each other. In his eyes, Brunson is too strong when he posts up and Graham is too quick for Brunson in the open court.

Grant Hill, the former Duke star, was a color analyst alongside Jim Nantz and Bill Raftery for KU’s games against Clemson and Duke in Omaha. After watching Graham play for a couple of games, he’s confident that Graham will find a way to impact the game whether it’s scoring, passing or just his leadership.

"He may not have put up the gaudy numbers but he has an impact," Hill said of Graham. "He’s felt when he’s out there."

Watching Malik Newman explode for 32 points in the Elite Eight, scoring all of the team’s 13 points in overtime, Hill said it was “one of the great performances that I’ve seen.”

Matching up against Villanova, Hill believes the Jayhawks need one player to step up offensively alongside Newman and Graham, highlighting Svi Mykhailiuk or Lagerald Vick.

“Villanova is a tough team and they are well disciplined,” Hill said. “They’ve been here on this stage, their core guys. But Kansas is more than capable and I think it’s going to be a great matchup.”

The Jayhawks are back in the Final Four for the first time since 2012 and Barkley believes that Self’s coaching record speaks for itself, no matter how the rest of the weekend ends up.

“It’s like, ‘Oh, he’s only won one national championship.’ I’m like, ‘Yeah, a lot of coaches never won a championship,’ ” Barkley said. “Winning that many (conference) championships in a row is incredible, I mean flat out incredible.”

I hope Sir Charles is right about his prediction for the semifinal...

I think he’s picking Villanova. Which is fine bc he’s picked against KU every time. In fact I’m GLAD CB picked Nova. RCJH