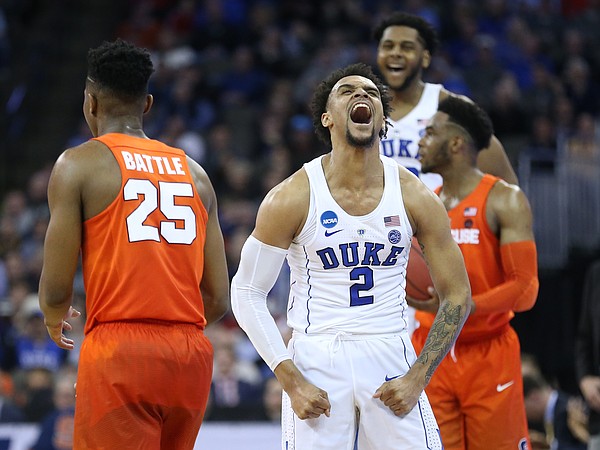 When the brackets were unveiled on Selection Sunday, everybody saw the opportunity for Kansas and Duke to meet in the Elite Eight. Both teams took care of business in the first three rounds and set up the mega matchup between blue bloods.

With a trip to San Antonio and the Final Four on the line, the two storied programs will be the last game to tip off this weekend (4:05 p.m., TV: CBS). Both teams feature talented senior guards, but Duke is filled with likely one-and-done players while Kansas has the old-school lineup, in this era at least, with some more experience.

“It's two blue bloods; two great, historic programs; and two Hall of Fame coaches,” Devonte’ Graham said. “And it's a pride thing. And you want to do it. And the fans to have something to brag about. And, of course, getting to the Final Four is on all of our minds. Duke-Kansas is a huge matchup.”

The second-seeded Blue Devils (29-7) finished second in the ACC this season. After losing three of four games at the start of February, they switched to a zone defense. Since then, they’ve posted a 10-2 record, losing to North Carolina in the ACC Tournament and at Virginia Tech.

Fun fact: The Blue Devils have a 2-6 record in games decided by five points or less this season, which includes their four-point win over Syracuse in the Sweet 16.

Series history: Duke leads 7-4. The Blue Devils have won three of the five meetings in the NCAA Tournament, including the 1991 national championship. 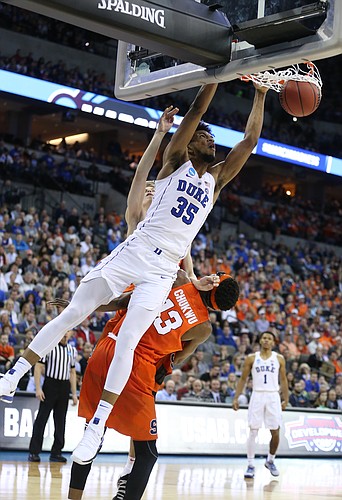 Duke forward Marvin Bagley III (35) throws down a lob jam over Syracuse center Paschal Chukwu (13) during the second half, Friday, March 23, 2018 at CenturyLink Center in Omaha, Neb. by Nick Krug

Named the ACC’s Player of the Year, Bagley is one of the most efficient big men in the country. He’s averaging 21.2 points and 11.1 rebounds, shooting 61.5 percent from the field and 38.6 percent from the 3-point line. He is on pace to become the 13th player in ACC history to lead the conference in points and rebounds.

Projected to be a lottery pick in the upcoming NBA Draft, Bagley reclassified after committing to Duke in August. He’s registered 21 double-doubles, grabbing an average of four offensive boards per game with his unbelievably quick second jump.

In the NCAA Tournament: Averaging 22 points and 7.7 rebounds while shooting 26 of 36 from the floor (12 of 17 at the free-throw line) and recording only four turnovers. 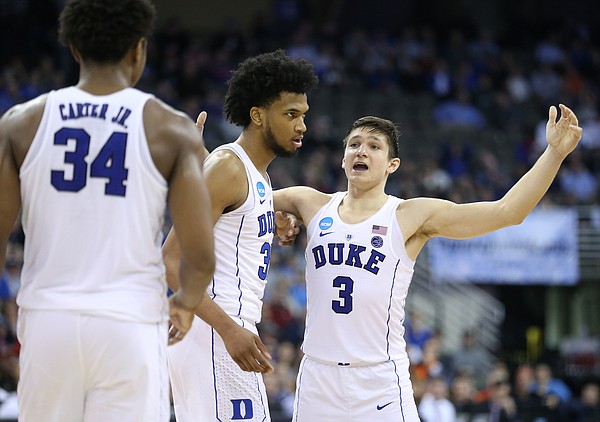 Boasting a 12-2 record in NCAA Tournament games, Allen provides most of the experience for a young Duke lineup. He went through a shooting slump during the middle of the year but is still averaging 15.6 points, 3.3 rebounds and 4.7 assists per game. He leads the Blue Devils with 60 steals.

Allen, who has drawn criticism for a few tripping incidents over his career, is shooting 37.5 percent from the 3-point line. Helping Duke to a national title in 2015, he is 16 points away from becoming the program’s 12th 2,000-point scorer. He was a third-team all-ACC selection. 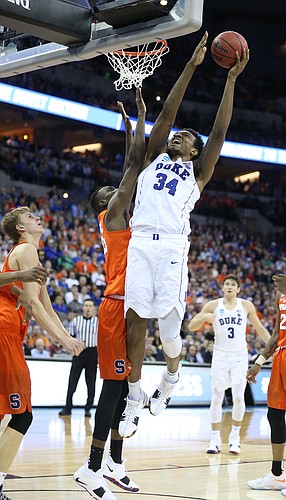 Duke forward Wendell Carter Jr (34) gets up for a bucket during the second half, Friday, March 23, 2018 at CenturyLink Center in Omaha, Neb. by Nick Krug

A second-team all-ACC pick, Carter doesn’t attract as much attention as Bagley but he’s likely another NBA lottery pick. With 16 double-doubles this year, Carter is averaging 13.6 points and 9.3 rebounds, leading the Blue Devils with 75 blocks in the middle of their zone. He’s a 44.2 percent shooter from the 3-point line in 43 attempts.

Carter is a former AAU teammate of Udoka Azubuike, winning the prestigious Peach Jam together. Like Bagley, he’s another relentless offensive rebounder, averaging 3.03 per game. He’s a 74 percent free-throw shooter.

In the NCAA Tournament: Recorded 36 points, 26 rebounds and 5 assists through three games, shooting 13-for-21 from the floor. 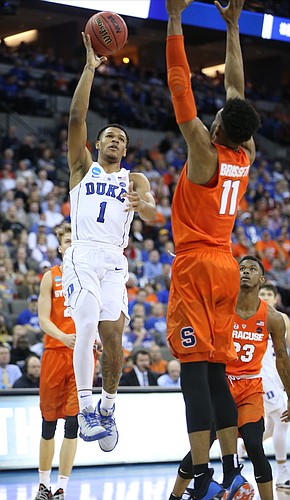 An extremely quick point guard, Duval has struggled with his shot for most of the season. Shooting 28.7 percent from the 3-point line, Duval is averaging 10.0 points and 5.6 assists per game. According to hoop-math.com, he takes 47 percent of his shots at the rim. A former IMG Academy teammate of Silvio De Sousa, he picked Duke over Kansas in his recruitment.

In the NCAA Tournament: Scored 32 points on 11-for-28 shooting (5 of 12 from 3) while dishing 19 assists and committing eight turnovers. 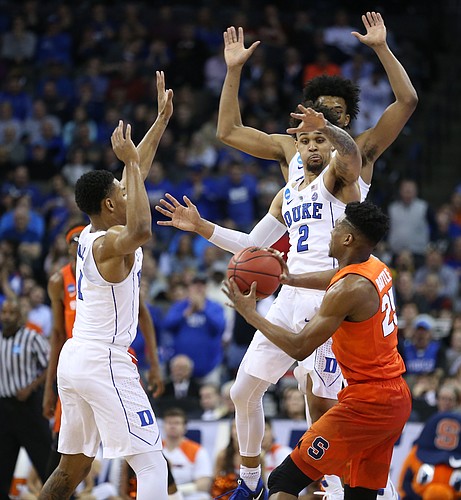 The Blue Devils pressure Syracuse guard Tyus Battle (25) during the second half, Friday, March 23, 2018 at CenturyLink Center in Omaha, Neb. by Nick Krug

Duke’s best shooter at the free-throw line and 3-point arc, Trent is averaging 14.4 points and 4.3 rebounds per game. Originally from Apple Valley, Minn., Trent shoots 41.1 percent from 3 and 87.5 percent at the charity stripe, knocking down the clinching free throws in Duke’s Sweet 16 win over Syracuse.

ONE THING DUKE DOES WELL

Turning to a zone defense after a midseason losing streak, Duke boasts one of the better defenses in the country despite playing a long list of freshmen. One of the tallest teams in the NCAA Tournament, the Blue Devils have only allowed an opponent to reach 70 points twice in the last 12 games (after switching to zone full time). Opponents are shooting 39 percent from the field and 26.5 percent from 3.

Playing in the zone defense has allowed the Blue Devils to force opponents into tougher shots but they don’t force many turnovers. In their last five games, opponents have turned the ball over 12 times or less in four of them. 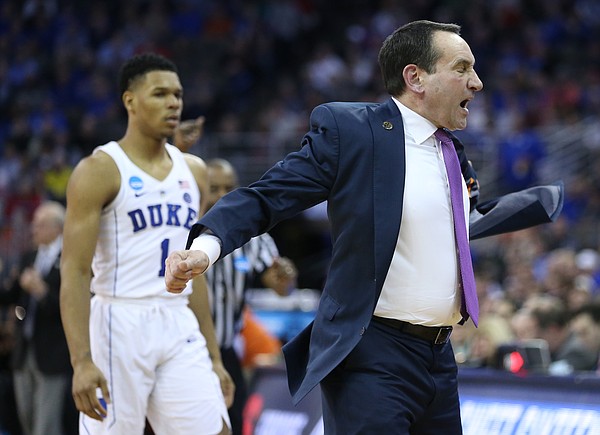 Duke head coach Mike Krzyzewski throws off his jacket in frustration during the second half, Friday, March 23, 2018 at CenturyLink Center in Omaha, Neb. by Nick Krug

In a matchup between Hall of Fame coaches, Mike Krzyzewski is in his 38th year at Duke. He’s attempting to reach his 13th Final Four after winning a national title in 2015. He’s the all-time winningest coach in Division I men’s basketball history.

Duke by 3.5. The Jayhawks have played with a smaller margin for error all season, but I think they will need many things to go their way to reach the Final Four. They’ll have to hit 3s over Duke’s zone. Udoka Azubuike will have to stay out of foul trouble. They’ll have to rebound as well as they have all year. As much focus as the Jayhawks will place on Bagley, I think it allows Allen to take advantage with shots from the outside.