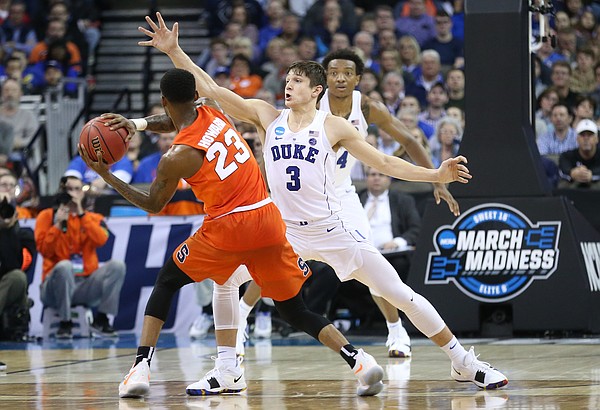 Duke guard Grayson Allen (3) defends against a pass from Syracuse guard Frank Howard (23) during the second half, Friday, March 23, 2018 at CenturyLink Center in Omaha, Neb. by Nick Krug

Omaha, Neb. — As the final minutes ticked off the clock in the Kansas basketball team’s 80-76 victory over Clemson in the Sweet 16 on Friday, Duke players stood in a tunnel waiting for their chance to take the floor in the following game.

The Blue Devils were behind a curtain so they couldn’t see the court or much of the video board. They heard the cheers and groans as the Jayhawks saw their 20-point lead drop into single digits, but really only knew the final result.

Focused on Syracuse, before their eventual 69-65 win at CenturyLink Center, Duke players said they needed to watch film in their hotel before they could give much of a scouting report of Kansas. But they are plenty familiar with their Elite Eight opponent.

Many of them were recruited by both schools. They’ve played against each other in AAU. Duke freshman point guard Trevon Duval took one of his official visits to Allen Fieldhouse. Plus, they saw each other earlier this season at the Champions Classic despite playing different teams.

“Great shooting team. Very feisty and very hungry,” said Duke freshman forward Wendell Carter Jr. “They are going to come out here and play great defense. And they run the floor. That’s really all I know about them.”

Duval, who had two points and four assists vs. Syracuse, considered playing alongside Devonte’ Graham and Malik Newman during his recruitment. He met most of KU’s players during his visit and he played with KU freshman Silvio De Sousa at IMG Academy in Florida last year.

Now he has a chance to line up against them for a spot in the Final Four.

“Devonte’, he’s been winning and nominated for a lot of awards,” Duval said. “They have great shooters and a really good big guy, Udoka (Azubuike). They are a really good team. We have to go back to the hotel, do our scout and then see what we can do to beat them.”

It’ll be the first meeting between the two schools since the 2016 Champions Classic in New York, which ended with a game-winning shot from Frank Mason III. Grayson Allen was limited to 12 points (4 of 15 shooting) in 38 minutes.

Both teams have a much different look than their last matchup. Duke features its latest crop of one-and-done NBA prospects. For Kansas, Azubuike was just playing in his second collegiate game and Newman was sitting out the season as a redshirt.

“They are in the Elite Eight for a reason,” Duke sophomore center Marques Bolden said. “We just know they are a real tough and physical team, and we look forward to the matchup."

At this point in the tournament, teams expect to play the best players and teams in the country. Looking ahead to potentially matching up against Graham, Duval said it will be “pretty cool” to play the Big 12 player of the year.

“It’s another time for me to prove myself and for our team to prove ourselves also,” Duval said. “It’s just another opportunity.”

My negative side and my positive side are in deep conflict with each other about this game.

My negative side gives the following reasons why we won't win this game.

1) Bill Self sucks at winning Elite Eight games (2-5 with KU, 2-7 overall) 2) Kansas doesn't have the talent or deep bench Duke has. 3) Kansas is a 3-point underdog. 4) The media, which has been sucking Coach Ratface's you-know-what for thirty years, is not only predicting a win, but clearly wants a Duke win. 5) Kansas hasn't exactly looked dominant for a full 40 minutes against any of the teams it has faced so far in the Tournament.

My positive side gives the following reasons why we will win this game.

1) Bill Self's two wins in the Elite Eight are against teams from the state of North Carolina (Davidson in 2008 and UNC in 2012), and here's a third team from that state. 2) The fans ought to be on our side, as we are only 2 or 3 hours from Lawrence. 3) Kansas has risen to the occasion in high-stakes games this season - at Texas Tech and three times against West Virginia, one of them in the Big 12 Tournament finals. 4) There are no one-and-dones on the roster. We've had one-and-dones the previous five seasons, all of which ended prematurely. Last time we didn't have a OAD was 2012, our most recent trip to the Final Four. 5) Every time I have said Kansas won't do something, they go out and do it. So I say Kansas won't win this game. And Kansas will prove me wrong as they have done several times before.