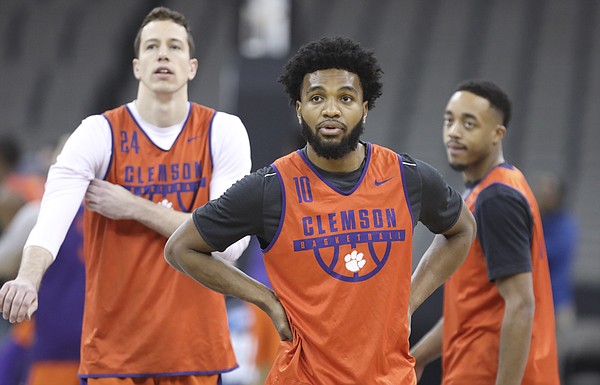 Omaha, Neb. — The purpose of the trip was to mix in freshmen, transfers and upperclassmen at the beginning of the season. Essentially an opportunity to bond overseas before the grind of the season begins.

Scheduled to play four games in August, the results don’t matter. Traveling overseas to play various all-star teams is a lower level of competition than anything in a Power Five conference. Perhaps, it’s a small chance to gain some chemistry but players learned as much off the court as they did while playing.

But looking back months later, players were grateful for the chance to spend some extra time together. Kansas traveled to Italy and Clemson went to Spain. The Jayhawks had a 4-0 record, winning each game by more than 25 points, and Clemson went 3-0.

“We got a lot of new guys that came in just this year so I think it was just a really good chemistry building thing,” Clemson forward Mark Donnal said. “We played three games out there, but the focus wasn’t even on that. It was just being around each other, establishing those relationships and I think it’s kind of carried over to the season.”

The fifth-seeded Tigers (25-9) opened the season by winning 14 of their first 15 games, including non-conference victories over Ohio State and Florida.

During the trip to Spain, Clemson canceled its fourth and final game after a nearby terror attack in Barcelona. Starting guard Marcquise Reed said it was a reminder to not take anything in life for granted and possibly brought the team closer together.

“For whatever reason I just think this team clicked right away,” Clemson coach Brad Brownell said. “We have some freshmen on our team that have outgoing personalities and some characters that have really kind of energized our program and combine that with older players that are good players, mature, and I think there is just a feeling that guys like each other.”

After the trip to Italy, Kansas players mentioned the same chemistry-building, bond-tightening experience even if the competition wasn’t as high as they expected.

Donnal said he wasn’t sure if the overseas trips, which schools can only take once every four years, would be as beneficial for a team with a ton of returning players. But when there’s plenty of newcomers, it’s like a sped up preseason.

“You’re all you got when you get out there,” Reed said. “You don’t really know nobody. You have no choice but to stick close to each other.”

Brownell added: “When we went to Spain on a foreign tour, I just left feeling unbelievably confident about our group because I loved our leadership. I loved the synergy and spirit of our team. And I knew we had good players. I knew our starting five were good players and would play well this season.”