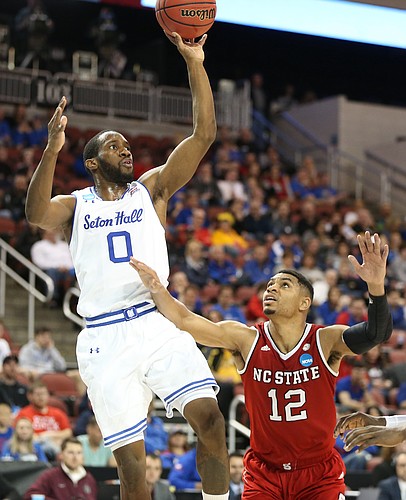 Matt Tait in another column today that it may be a positive that SH probably played their best game already. We see it every year and the next game is a little flat. Then maybe a team gets through the first weekend and flames out in the sweet sixteen. If a team has a weakness, and an 11 loss team surely does then they play a game that reflects that fact. Hope we get that.

I don't think we need that help because we are probably good enough even if they play well. Here we go again in that it will likely depend on our post play being just good enough to win.

1] If I was KU's opponent and Dok couldn't go, I would double on Graham straight up, cutting off his driving, passing and shooting, Face up on Newman, Svi and Lightfoot/Silvio and force Vick or Garrett to beat me!

3] Seton Hall may have a "road mindset" but they haven't experienced an Allenesque type crowd.

4] Seven scholarship players who play plus a high school,senior......next to the National Champions, these guys are becoming one of my all time my favorite teams!

5] Every game I have taped and watched later, KU has won. Every loss KU has suffered, I have watched live. At least on Saint Patrick's day Saturday night in St. Louis, Missouri I'm sure most bars will not be showing the KU game. I'll gladly keep taking one for the team.........as long as it works, it ain't crazy!!!!!