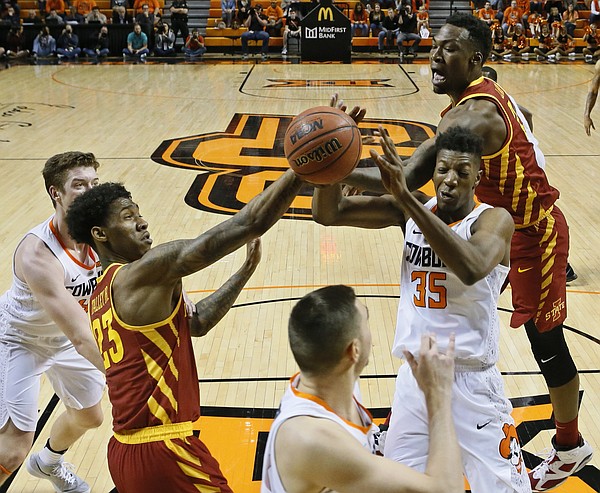 After all of the great games between Kansas and Iowa State over the past few seasons, the Cyclones are rebuilding after losing their talented senior class last year.

“Personnel-wise, they are (different),” Kansas coach Bill Self said. “They still run some of the same stuff and they run some really good stuff.”

The Cyclones won at Allen Fieldhouse last year — “The thing I remember is just everyone’s faces in the stands being shocked,” ISU guard Donovan Jackson said — but Self said he didn’t think KU (12-3, 2-1) players would need to use it as much motivation.

“That’s not something you circle and you froth at the mouth since last April because of one game,” Self said.

Iowa State is ranked 106th by KenPom, the lowest among Big 12 teams by more than 50 spots.

Fun fact: Iowa State senior Hans Brase, a 6-foot-9 forward off the bench, played against Kansas in the 2015 World University Games. Suiting up for Germany in the gold medal game, Brase had six points, six rebounds and three assists in an 84-77 overtime loss.

Series history: Kansas leads 179-64, which includes a 51-10 mark inside of Allen Fieldhouse. Seven of the last 13 games have been decided by nine points or less with three of those in overtime. 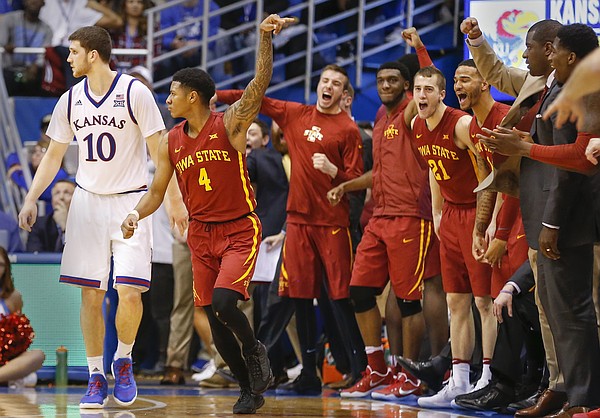 A guard who prefers to mostly shoot 3-pointers, Jackson is averaging a team-best 16.7 points on 41.8 percent shooting. He’s knocked down 43.5 percent of his 3-pointers and is a Big 12-best 93 percent shooter at the free throw line.

He’s averaged 23.2 points in game played away from home. Jackson has scored at least 24 points in seven games this year, only behind Oklahoma’s Trae Young among Big 12 players.

Jackson, from Iowa Western CC, scored a career-high 30 points in an overtime loss to Oklahoma State last weekend. He’s made six threes in each of the last two games. 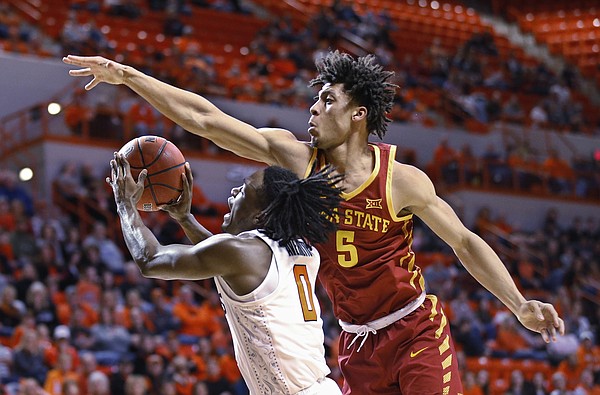 Oklahoma State guard Brandon Averette (0) is fouled by Iowa State guard Lindell Wigginton (5) as he shoots in the first half of an NCAA college basketball game in Stillwater, Okla., Saturday, Jan. 6, 2018.

Wigginton has scored 20 points in five of his last nine games. He’s averaging 14.8 points, which is the third-best freshman scoring average in school history while shooting 40.3 percent from the 3-point arc and 66.7 percent mark at the free-throw line. 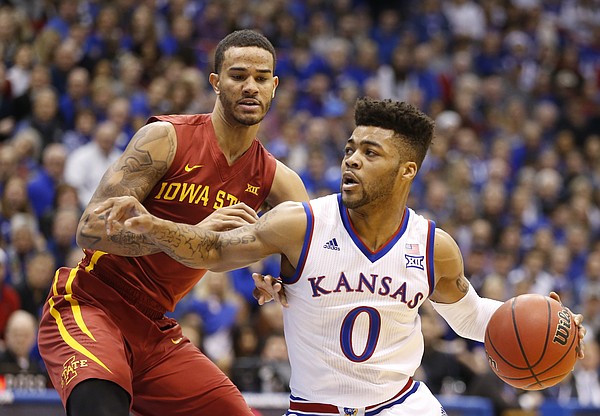 A stat-sheet stuffer, Weiler-Babb is averaging 12.3 points, 7.6 rebounds and 7.5 assists per game. He ranks sixth nationally in assists. Only three players since the 1992-93 season have averaged at least 12 points, 7 rebounds, 7 assists and 1 steal per game: Denzel Valentine, Kyle Collinsworth and Jesse Sanders.

A recent addition to the starting lineup, Lard is averaging 11.1 points and 6.5 rebounds in 19.9 minutes per game. He has blocked a team-best 23 shots and is shooting 63.8 percent from the field.

According to hoop-math.com, he converts on 84 percent of his shots at the rim. He started his high school career at Landry Walker High in New Orleans, the home of a few Kansas football players. He redshirted after arriving at Iowa State last January.

The Cyclones are a solid rebounding team, which is helped by their front court depth off the bench. In Big 12 games, they lead the conference with 125 rebounds (41.7 per game). A big part of that is offensive rebounding, totaling 36 second-chance points through three conference games.

The Cyclones have trouble creating good shots when they aren’t playing at a quick pace. According to hoop-math.com, Iowa State is only shooting 46 percent in its half-court offense, the worst mark in the Big 12. Part of that is problems at the 3-point line. In three conference games, the Cyclones are shooting 17 of 60 (28.3 percent) from behind the arc. 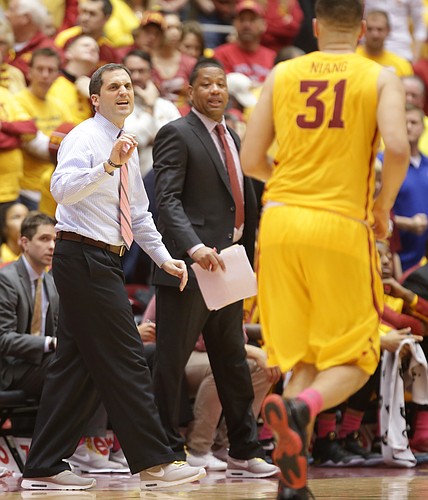 Iowa State head coach Steve Prohm gets the attention of forward Georges Niang (31) as he gets back on defense during the second half, Monday, Jan. 25, 2016 at Hilton Coliseum in Ames, Iowa. by Nick Krug

Steve Prohm (rhymes with Rome) is in his third season with the Cyclones with an overall 56-28 record, guiding them to two NCAA Tournament appearances. Prior to his time in Ames, Prohm was the head coach for four seasons at Murray State, finishing with a 104-29 record.

Kansas by 16. After back-to-back games against ranked opponents, the Jayhawks should have a chance to catch their breath against the Cyclones. This seems like it would be a perfect time for bounce back performances from Malik Newman or Lagerald Vick, who both struggled last week.

Get on the glass, Jayhawks! And don’t be waiting around for ‘Buike to be the only rebounder...