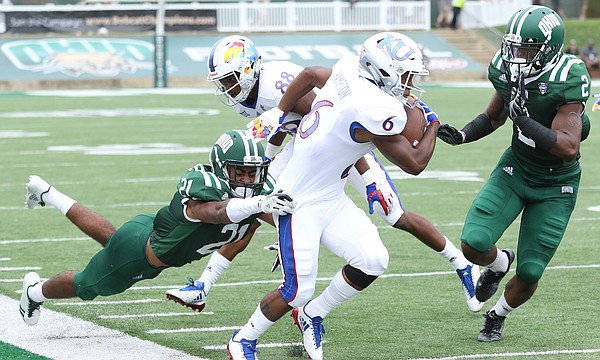 Kansas wide receiver Quan Hampton (6) is pushed out of bounds by Ohio cornerback Jalen Fox (21) and Ohio cornerback Mayne Williams (2) during the fourth quarter on Saturday, Sept. 16, 2017 at Peden Stadium in Athens, Ohio. by Nick Krug

A little more than a year has passed since Kansas football coach David Beaty introduced his 2017 recruiting class on National Signing Day.

The group, which featured a few starters, was ranked No. 57 in the nation by Rivals. Obviously, it didn’t translate to extra wins last season, but it likely will feature more than a few contributors to next year’s squad.

In last year’s recruiting class, the Jayhawks had nine players from the Juco ranks and 12 from high schools. Among the 21-player class, seven redshirted and Octavius Matthews was forced to end his career because of a heart condition.

From starters to redshirts, and everything in between, a breakdown of how the Class of 2017 looked at the end of its first season:

Peyton Bender, QB: From Itawamba CC, Bender earned the starting quarterback job out of fall camp. The 6-foot-1 signal caller lost his job after back-to-back shutouts against Iowa State and TCU. He returned as a starter in the team’s final game, ending the season with 1,609 passing yards, 10 touchdowns and 10 interceptions while completing 54 percent of his passes.

Earl Bostick, OL/TE: Projected to be on the offensive line with his 6-foot-6, 270-pound frame, Bostick made some appearances at tight end, a position he played in high school. Bostick caught an eight-yard touchdown in a loss to Texas, his only reception of the season.

Antonio Cole, CB: After playing at a pair of junior colleges in his first two collegiate seasons, Cole only played sparingly last season. He didn’t record any stats, participating in two losses when KU dealt with injuries.

Hasan Defense, CB: Starting in the secondary for the entire season, the 5-foot-11 Defense led the team with nine pass breakups. From Kilgore College in Texas, he had 42 tackles (34 solo) and two interceptions.

Jay Dineen, LB: The Lawrence native, out of Free State High, redshirted and couldn’t practice at the end of the season because of an injury. 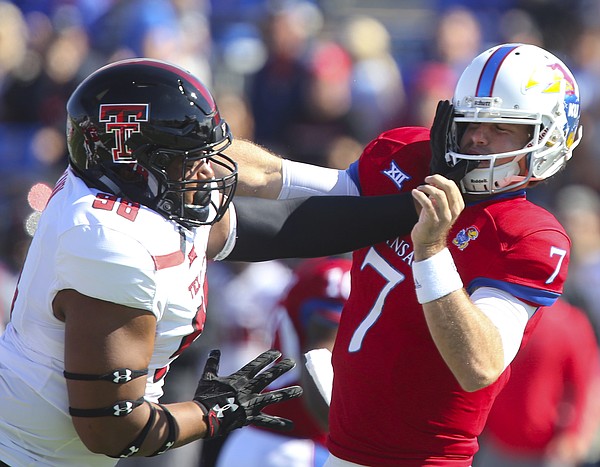 Texas Tech defensive lineman Nick McCann (98) gives a slap to Kansas quarterback Peyton Bender (7) after a pass during the first quarter on Saturday, Oct. 7, 2017 at Memorial Stadium. by Nick Krug

Quan Hampton, WR: After shining throughout fall camp, the speedy 5-foot-8, 170-pound slot receiver quickly found a role on the offense. He had 21 catches for 145 yards in six games, missing the end of the season because of a season-ending injury. He returned two kickoffs for a total of 30 yards.

J.J. Holmes, DT: Out of Hutchinson CC, the 6-foot-3, 335-pound Holmes didn’t start playing football until his senior year of high school. He became a starter at defensive tackle, recording 24 tackles (2 for loss), one sack and one quarterback hurry.

Kerr Johnson, WR: With injuries piling up at the end of the season, Johnson earned more playing time. The junior college transfer from California had eight catches for 92 yards.

Travis Jordan, WR: From Landry Walker High in New Orleans, the same school as safety Mike Lee and incoming cornerback Corione Harris, the 6-foot-2 Jordan dealt with some “health issues,” according to Beaty, at the beginning of fall camp and redshirted.

Octavius Matthews, RB: It was announced in August that Matthews had a heart condition and his college football career was over. His mother, Kristy Bradford, died due to heart complications last year.

Willie McCaleb, DL: Once viewed as a player who could start at defensive end opposite of Dorance Armstrong, the junior college transfer didn’t play in a game last season.

Cooper Root, LB: Out of Wichita Collegiate, Root redshirted last season. Listed at 6-foot-2, 200 pounds, Beaty said at last year’s signing day that he could line up as an inside or outside linebacker. 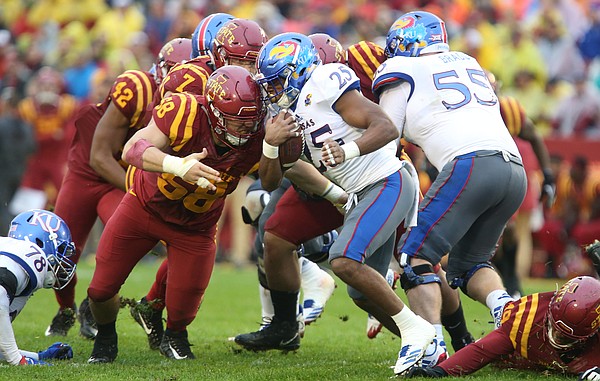 Kansas running back Dom Williams (25) is hit by Iowa State defensive end J.D. Waggoner (58) on a run during the second quarter on Saturday, Oct. 14, 2017 at Jack Trice Stadium in Ames, Iowa. by Nick Krug

KeyShaun Simmons, DL: By the end of the season, the 6-foot-2, 285-pound Simmons emerged as a reliable contributor on the defensive line. From Pearl River CC, he finished the year with 19 tackles (4.5 for loss) and 1.5 sacks.

Kenyon Tabor, WR: The 6-foot-4, 215-pound receiver from Derby (Kan.) sat out the entire season because of an injury. Before Tabor’s injury, Beaty described him as a “promising” receiver.

Shakial Taylor, CB: Taylor earned the starting nod out of fall camp and held the spot until he suffered a season-ending injury. The 6-foot, 175-pound junior college transfer made 22 tackles with three pass breakups.

Robert Topps, CB: Bigger than most players at his position, the 6-foot-2, 190-pounder from Chicago is expected to develop as a cornerback. He redshirted during the season, but defensive coordinator Clint Bowen said in fall camp, “We have to invest time in Robert.”

Dom Williams, RB: One of the most-hyped recruits in the class, Williams was a four-star prospect. Battling injuries, his playing time was inconsistent, but the McKinney, Texas native finished the year with 176 yards and three touchdowns on 51 attempts. He added seven catches for 49 yards.

So, Bobby, how would you evaluate this class?

Probably one year too early to fully judge the high schoolers because of the redshirts. But I'm not sure that there's an all-Big 12 type talent in the class, and I think every class needs at least a few. Among the redshirts, I think Tabor could be a good receiver judging from how he played in high school.

Any chance this is a series?

This is the problem I have with Juco players for example Cole and McCaleb both these players only have two years in the program neither one of them started a game last year now they only have one more year to play in the program then they are out. If they had been high school players they could have redshirted like a number of high schoolers did this recruiting class then have four more years to make an impact on the program. You have guys are coming from Junior College that don't play one year have little impact the next and then they're out could have had a high school player for 3 more years, this is where Juco problem comes into play but everybody on this board wants to look the other way and say David paid he's doing a great job recruiting. Really?

It's not the players you get, it's what you get from the players!!!! That's all that needs to be said.