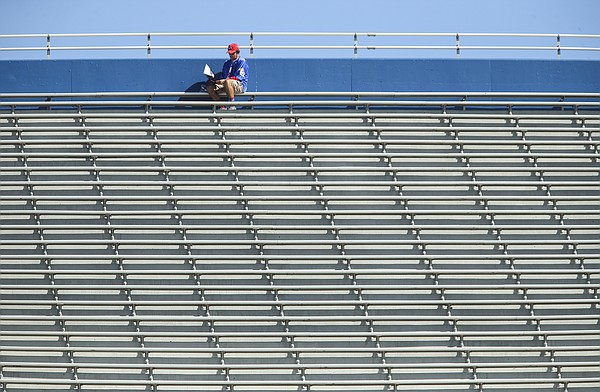 A Kansas fan looks through the game program from the top of the stands during the fourth quarter of KU's football game against Texas Tech, Saturday, Oct. 7, 2017 at Memorial Stadium. The Jayhawks lost, 65-19. by Nick Krug

If anyone found it hard to watch the Kansas football team play in a 43-0 road loss to TCU last weekend, you weren’t alone.

Playing in primetime for the first time since 2009 on a network television station, the Jayhawks produced only 21 yards of offense and trailed by 24 points at halftime. Most people avoided turning on the channel.

With a full slate of college football games in primetime, along with Game 7 of the American League Championship Series between the New York Yankees and Houston Astros, KU’s game against TCU drew record-low viewership in primetime.

According to sportsmediawatch.com, Kansas-TCU had 1.2 million viewers and a 0.7 rating on FOX, down 50 percent from last year’s game between Oklahoma and Texas Tech in the same window.

The 0.7 rating was a record low for a college football game on primetime over-the-air TV. Previously, the record low belonged to Baylor-Iowa State on FOX in 2015.

Leading into the KU-TCU primetime game, FOX received strong ratings from its earlier games, including 3.0 million viewers and a 1.9 rating for Oklahoma-Kansas State.

Among the other primetime games last weekend, Michigan-Penn State delivered 6.95 million viewers and a 3.9 rating on ABC while USC-Notre Dame produced a 1.8 rating with 2.99 million viewers on NBC.

I knew that if we kept plugging away, we could set some records ...

Thank you for the stats, yawn

Let's talk about the state of the program

Once again, the alumni base needs to understand the flaming crater this staff assumed. Those stats have been oft posted on this site, but not always understood

This coaching staff inherited a program, where year 3 is actually year 5 (see Mangino)

We all understand the results on the field have not been tolerable, but show me a staff from the head coach on down that can recruit and provide the optimism that this staff provides

This is not basketball, where within one year you can go from poor to great

Yes there are a few exceptions, Purdue / ISU to name a couple

But in general, alumni please dig in for the long haul with this staff

If Beaty and Co. are such good recruiters why are they getting beaten so badly by MAC teams in year 3? Beaty is now losing recruits because even his great salesmanship can't convince kids who see the pitiful on-field product. You're still trying to blame Mangino for this instead of the person responsible - Zenger? You must be a friend or relative of Zenger. KU has far more money and resources than MAC teams, but can't beat them. Beaty needs to be replaced by a proven winner with head coaching experience. Zenger gambled on Beaty because he was cheap and fell for the "he can recruit" wishful thinking that already failed with Gill and Weis. It is obvious Zenger made another bad choice. I will definitely not dig in for the long haul with this staff because they're producing nothing except worse results. Give me a proven winner for a coach and then I'll dig in for the long haul. Fire Beaty NOW.

Why? This staff hasn’t earned it.

How much you wanna bet someone at Fox got fired for putting KU-TCU on national TV?

I would like to send a copy of the above photo to Girod at the top of the hour, every hour, from every KU football fan.

We're headed to the game today and I'm going to try and estimate whether there is more purple or blue in the stands. Either way, it should be our best-attended game of the season due to the influx of pussycats.

Here's hoping our boys can pull off a shocker.

The KU game should not have been on prime time. The World Series game was shown on Fox Sports 1. Someone must have switched the schedule. I have been a Jayhawk for many years (class of '51) so I have seen both the great and the not so great teams through the years. I still love and will always watch the Jayhawks.

Even if both TCU and Kansas were playing outstanding football, the TV ratings would not have improved much. Neither team has much of a national TV following compared with OU-Texas or Michigan-Ohio State or even K-State-Kansas.