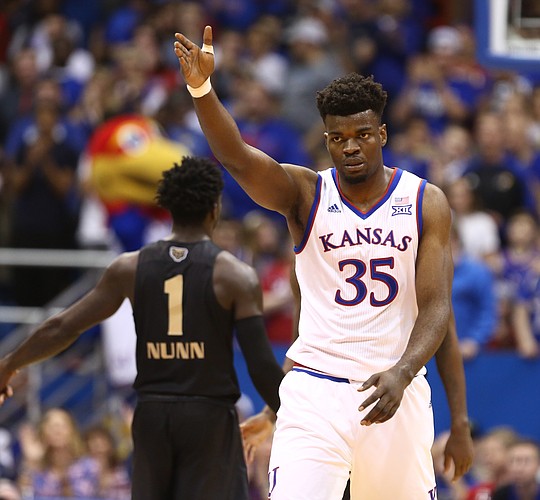 Kansas center Udoka Azubuike (35) signals the ball going the Jayhawks' direction after an Oakland turnover during the first half on Friday, Nov. 24, 2017 at Allen Fieldhouse. by Nick Krug

Feast week certainly lived up to the hype with some excellent non-conference games across the country through midseason tournaments. The PK80 tournament in Portland was a nice touch for Nike schools, giving college basketball a chance to shine during college football season.

Welcome to this season’s first edition of the college basketball blue bloods update, where I’ll take a quick bi-weekly glance at the Top 10 teams in the country.

Without further ado, we’ll take a look at this week's top teams (based on the Associated Press poll):

Marvin Bagley can do some things. pic.twitter.com/EgrrWfQYWv

None by Justin Russo

It’s a shame Marvin Bagley III didn’t have an opportunity to play much in the Champions Classic because of an eye injury, but he’s more than made up for it. Facing Texas and Florida in back-to-back games, Bagley combined for 64 points and 30 rebounds.

On a team with a lot of freshmen, Bagley, who reclassified in August, looks a level above everyone else. How do you stop him? “I have no idea,” Florida coach Mike White said at halftime Sunday. The Blue Devils have lots of room for improvement, especially defensively, but they’ve shown a lot of poise for such a young team in crunch time.

Record: 8-0. Next: Wednesday at Indiana.

The Jayhawks scored 100-plus points in consecutive games for the first time since January 2003 in wins over Texas Southern and Oakland. Despite playing with limited depth, they are shooting 43 percent from the 3-point line and limiting turnovers.

All five starters are averaging at least 12 points per game, while Devonte Graham ranks second in the nation with 9.2 assists a night.

Michigan State contested 42 of North Carolina's 61 shots and they went 5-of-42 when contested.

The Tar Heels shot 24.6% overall, their lowest shooting percentage in a game in school history. pic.twitter.com/eEFnjjvfBg

Miles Bridges was a little banged up, but that didn’t stop the Spartans from taking first place in their bracket of the PK80 tournament. In a 63-45 victory over North Carolina, the Spartans held UNC to 24.6 percent shooting, its worst percentage in school history.

In three games against DePaul, UConn and UNC, the Spartans held their opponents to 28 percent shooting, including a 21 percent mark from the 3-point line. That will make up for some of their own troubles on offense, averaging 17 turnovers per game.

How good was Villanova’s defense in the championship game of the Battle for Atlantis? Playing against Northern Iowa, the Wildcats didn’t allow any free throws in a 64-50 victory. On offense, Jalen Brunson and Mikal Bridges are averaging more than 18 points per game.

A little unrelated to Villanova’s undefeated start to the season, the Wildcats will face Kansas in a home-and-home series beginning in 2018.

And you thought Maui Mike Brey’s sideline attire was casual ...

None by Notre Dame MBB

Coach Mike Brey let loose in the Maui Invitational, standing on the sidelines in a t-shirt and shorts with tennis shoes for each game. After the Irish won the championship game, he returned to the locker room shirtless. Nothing wrong with having fun after a win.

As far as play on the court, 6-foot-6 senior Bonzie Colson has certainly lived up to the hype. In wins over Chaminade, LSU and Wichita State, Colson produced 60 points and 30 rebounds with only two turnovers. Martinas Geben made the game-winning free throws to complete a comeback against the Shockers, 67-66.

Record: 6-0. Next: Thursday at Michigan State.

The Gators were a few minutes away from being the talk of college basketball for a week. But they couldn’t hold off Duke in a 87-84 loss in the championship game of their PK80 bracket, showing their fatigue in the second half. Fatigue might be the only thing that can stop that spectacular offense, which is averaging 99.5 points per game. 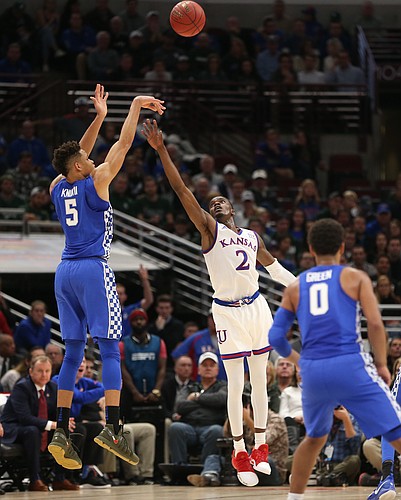 Kentucky forward Kevin Knox (5) puts up a three over Kansas guard Lagerald Vick (2) during the first half on Tuesday, Nov. 14, 2017 at United Center. by Nick Krug

Following the Champions Classic loss against the Jayhawks, the Wildcats have started to improve offensively with wins against mid-major teams. They still haven’t had a 3-point shooter emerge, which makes it hard to space the floor, but freshman Kevin Knox is averaging a team-best 16.1 points per game.

The Shockers showed their poise in a win over Cal in the Maui Invitational, storming back from an 18-point deficit in the first half. It’s even more impressive because they are still playing without Markis McDuffie, last season’s top scorer and rebounder who is recovering from a stress fracture in his left foot.

Wichita State lost in the Maui title game to Notre Dame, surrendering a 14-point lead, but coach Gregg Marshall has to be a little encouraged by a strong start to the season. Conner Frankamp is averaging 9.8 points and 2.4 assists on 30 percent shooting from the 3-point arc.

The Aggies went on the road and picked up a dominant win over then-No. 10 ranked USC, 75-59. A future opponent on KU’s schedule in the Big 12/SEC Challenge, Texas A&M has crushed teams with its defense. Opponents are only shooting 23.3 percent from the 3-point line.

Five players are averaging at least 10 points per game, while 6-9 junior forward DJ Hogg runs the show with a team-best 16.8 points a night. "We had a bad year last year so they're still a little asleep on us," Hogg said.

Through the first five games of the season, Miami has won four of them by at least 20 points. The Hurricanes will have one of the biggest games of the week when they play host to Minnesota in the ACC/Big 10 challenge on Wednesday.

Record: 5-0. Next: Wednesday at Minnesota.

Three teams trending up
1. Minnesota (7-0): If you missed it, the Golden Gophers beat Alabama in one of the most bizarre games in college basketball history, playing the last 10 minutes 5-on-3 because Alabama’s bench was ejected during a near brawl, plus a foul out and ankle injury. But credit the Gophers for leading in the game before the craziness happened behind star forward Jordan Murphy.
2. Arizona State (6-0): The Sun Devils beat a ranked Xavier by 16 points in the Las Vegas Invitational. Tra Holder scored 40 points on 22 shots, proving himself as one of the best players in the Pac-12.
3. Baylor (5-0): Playing in Kansas City last week in the Hall of Fame Classic, the Bears left with wins against Wisconsin and Creighton. Manu Lecomte is averaging 19 points.

Three teams trending down
1. Arizona (3-3): One of the most talented teams in the country looked lost in the Battle for Atlantis. Deandre Ayton is averaging 20 points and 12 rebounds, but the Wildcats’ defense is atrocious.
2. Northwestern (4-2): Playing in the Hall of Fame Tip-Off Tournament, Northwestern was demolished by Texas Tech, 85-49. Tech was picked seventh in the Big 12 preseason poll.
3. Stanford (3-5): Not a good start to the season for the Cardinal, which lost all three games in the PK80 to Florida, Ohio State and Portland State. Reid Travis is the bright spot, averaging 21.4 points and 7.3 boards.

This is great and all, but can you guys bring back Hawks in the NBA? Or at least the daily recap of the their stats?

For sure, have no idea why they took that away - -good way to keep up with our former Hawks.