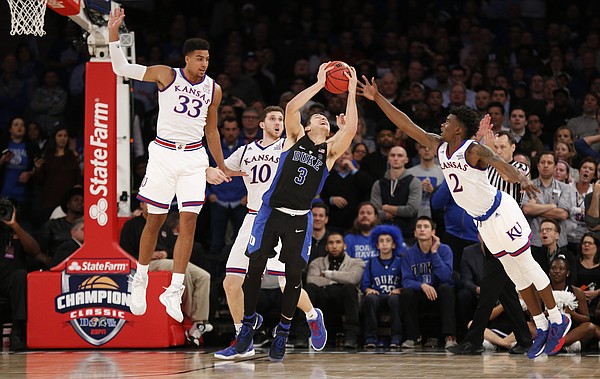 The Kansas defense tries to rip away a ball from Duke guard Grayson Allen (3) during the second half of the Champions Classic on Tuesday, Nov. 15, 2016 at Madison Square Garden in New York. by Nick Krug

There were plenty of great games last weekend, including a pair of thrillers that included Kentucky. But nearing Christmas break for a lot of teams, the top headline across the sport is Duke guard Grayson Allen.

For the third time in less than a calendar year, Allen was caught intentionally tripping an opponent during a game. He was suspended indefinitely on Thursday morning after picking up a technical foul for the move in Wednesday’s game against Elon.

Allen had a tearful apology in the locker room afterward, but he’s too good of a player to continually make dirty plays. There’s plenty of columns and stories about how Duke coach Mike Krzyzewski should reprimand Allen and KUsports.com’s Matt Tait offered his thoughts in his latest Gameday Chat.

But instead of focusing just on Allen and one headline, here’s a look at all of the top-10 teams in the country:

It’s a great time to be a Villanova fan. Of course, there was the NCAA title last season. The Wildcats have swept through non-conference play and have continued an 18-game winning streak. But one of their most prideful moments was their 21-point win against Temple, which made Villanova’s senior class a perfect 16-0 against Philadelphia area schools — the first class to own a perfect record in the City Series.

The Wildcats continued their winning streak with a 42-point win over American, setting up the start of Big East play next week. The New York Times had a nice feature on Kris Jenkins, who wants to be remembered for more than the guy who hit the game-winning shot in the national title game.

If UCLA proved how well it can play at its best in a road win against Kentucky, the Bruins showed they are still pretty tough when they aren’t playing their best basketball. The Bruins earned a 13-point, neutral-site win over Ohio State on Saturday, with a big game from backup point guard Aaron Holiday (20 points, five steals). They didn’t shoot particularly well and were sloppy in the first half with turnovers, but none of it mattered in crunch time when the Bruins found a way to pull away.

If the Bruins didn’t look good enough at the end of the non-conference season, starting center Thomas Welch (11.6 points, 9.6 rebounds per game) is expected to return for the Pac-12 opener against Oregon next week. Welch missed four games with bruised right knee.

The outlook for Big 12 play and the rest of the season shifted a little bit with the news Wednesday night that freshman center Udoka Azubuike will miss the remainder of the season with torn ligaments in his wrist.

That’s not an easy player to replace because of his size and his ability to protect the rim on defense. He led the team with 18 blocks. Of course, there’s still Landen Lucas, Carlton Bragg, Mitch Lightfoot and Dwight Coleby, but as Tom Keegan explained in his Lunch Break blog earlier today, Lagerald Vick and Svi Mykhailiuk are really the keys for the rest of the year.

Following a long break for finals, the Bears returned to the court to play four games within a week. There was no rust or problems against inferior competition. Baylor beat Southern, Jackson State, John Brown and Texas Southern all by at least 25 points.

Heading into conference action, the Bears feature the eighth-highest scoring offense in the Big 12 (79.6 points per game) and the third-stingiest defense (58.7). Even if they don’t score a ton of points, they are efficient (.506 field goal percentage), (.740 free-throw percentage) and they hold a strong rebounding advantage on the glass (plus-7.7).

Grayson Allen gets emotional in the locker room after tonight's tripping incident. pic.twitter.com/p34thdrMcI

None by Jessika Morgan

As mentioned above, Grayson Allen is the news of the week after his latest tripping incident. But that’s not the only news surrounding the program. The Blue Devils have played back-to-back lackluster games, winning by 10 against Tennessee State and nine over Elon. Duke will open ACC play (likely without Allen) on the road against a 10-1 Virginia Tech team.

The final freshman, Harry Giles, returned against Tennessee State and he looks like a guy who hasn’t played in more than a calendar year following knee surgeries. He’s only scored one point in 10 minutes. And if it wasn’t for the Allen headlines, the biggest story would be sophomore guard Luke Kennard’s comments about his team: “I’m just saying that we have to just buy in. Every guy on our team, inside, they have individual goals, and that’s a great thing to have, but sometimes those individual goals may tend to sneak up and kind of take over what it’s really all about, and that’s about winning as a group.”

Take a look back at a historic game for Malik Monk – a UK freshman record of 47 points. Incredible game. pic.twitter.com/87B12hxlJC

None by Kentucky Basketball

No team in the country had a tougher schedule last week than the Wildcats and they responded with two of the best games of the young season. Kentucky beat North Carolina in a 103-100 thriller, highlighted by 47 points from freshman Malik Monk on 28 shots and only five free-throw attempts. Then a few days later, the Wildcats lost, 73-70, against Louisville in a game that featured 10 ties and nine lead changes.

Credit the Wildcats for scheduling tough games, especially back to back, and providing some great non-conference highlights. Monk, obviously, has picked up some big attention after his phenomenal game against UNC, but don’t forget about point guard De’Aaron Fox, who averaged 22.5 points and 6.5 assists in those two games.

One of the six undefeated teams in the nation, Gonzaga showed plenty of poise with an 86-76 victory over Tennessee in its first game back on the court following a long break for finals. The ‘Zags have so many players that can hurt opposing defenses with six players scoring at least nine points.

The Bulldogs crushed South Dakota on Wednesday night, giving them their best start in program history. “To get this far along with all the success this program has had, it’s harder than heck to keep having something, to do something nobody else has done before,” coach Mark Few said. “To go 12-0 … especially with the nonleague slate we had, the opponents, and even the timing a little bit, was an impressive job by these guys.”

None by CBS Sports CBB

Beyond Roy Williams throwing his jacket, the Tar Heels nearly matched the Wildcats and Malik Monk’s explosive offense in a 103-100 loss in Las Vegas. Justin Jackson scored 34 points on 10-of-17 shooting while Joel Berry added 23 points. "Heck of a college basketball game if you don't care who won," Williams said. "But I do care who wins.”

North Carolina responded from the loss with a 43-point victory over Northern Iowa. Kennedy Meeks, the 6-10 senior forward, was dominant in the second half. The Tar Heels know how to play extremely fast and they will find their way to score points. But if Meeks is playing well, look out. He’s averaging 12.8 points and 9.0 rebounds.

Creighton survived a strong test from Oral Roberts on Saturday, failing to score in the final three-plus minutes in a 66-65 home victory. The Blue Jays, one of the best offensive teams in the country, scored on six of their final 29 possessions, but it was their defense that earned them a win.

The Blue Jays bounced back with an 11-point road win over Arizona State and their offense returned, especially from Marcus Foster (29 points). The Kansas State transfer, Foster, is averaging 19.1 points on 51 percent shooting from the floor.

None by ACC Digital Network

In a rivalry game that lived up to all of the hype, the Cardinals stepped up through their defense in a 73-70 victory over Kentucky. Their zone defense that is exceptional at trapping held Kentucky to just 30 points on 35 second-half possessions. On offense, Louisville was led by Quentin Snider, a cool moment for the hometown kid.

But it doesn’t get any easier. Perhaps, the toughest schedule in the country next week, the Cardinals will play at home vs. #12 Virginia, a neutral site against #16 Indiana and then on the road at #25 Notre Dame. That’s four straight ranked teams, two of them counting in the conference standings.

Three teams trending up
1. Oklahoma State: Somebody forgot to tell the Big 12 that it was supposed to be a down year. The Cowboys throttled Wichita State for a 93-76 road victory.
2. Purdue: On a night of great basketball in Indianapolis for the Crossroads Classic, the Boilermakers fought back from a 14-point first-half deficit in a 86-81 win over Notre Dame.
3. Butler: Beat back-to-back ranked teams in wins over Cincinnati and Indiana.

Three teams trending down
1. Syracuse: Lost by 33 points at home to St. John’s, the worst loss in the history of the Carrier Dome.
2. Oklahoma: Nobody said it was going to be easy replacing Buddy Hield and some of the other top players, but the Sooners have lost four of their last five games.
3. Iowa: The Hawkeyes, on a four-game winning streak, made headlines for the wrong reason last weekend. After an 84-73 win over North Dakota, coach Fran McCaffery and the Hawkeyes refused to shake hands afterward after physical play in the final minute.