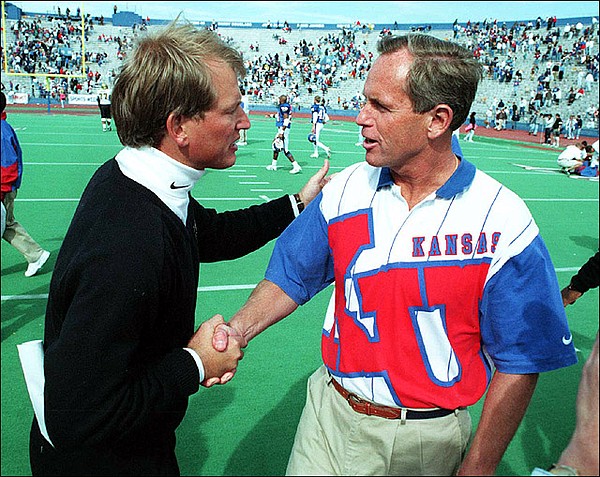 Another Monday brings another round of our “Ask Us Anything” blog.

And even though I’m actually on vacation this week, I used part of the travel time to knock out this week’s blog so that we wouldn’t create too much of a backlog with the questions you guys have submitted.

As always, we really appreciate all of the questions you guys have provided. Many of them have been thought-provoking while others have provided a nice break from the serious world of covering sports in a pandemic.

This week, we’ve got a mixture of both, so be sure to keep the questions coming. We can never have too many and you can submit them in a bunch of different ways.

Before we get to our first question this week, let me call to your attention the fact that Benton Smith is back in the mix for us here at KUsports.com and we could not be more excited to have him back from furlough.

He’ll hold things down this week while I’m recharging my batteries and then we’ll both get after it next week.

This week’s first question comes via email, from Roger Duell, who asks: “It seems whenever a KU head football coach experiences even moderate success they happily move on to bigger and better things. Has there really been a coach move on from KU and have more than one or two good years elsewhere?

This question jumped out at me because you don’t often see the words success and Kansas football in the same sentence.

It’s been a while since KU had a head coach who experienced moderate success at Kansas and the last one to do it did not move on to bigger and better things, he was asked to move on and did.

Mark Mangino did enjoy a couple of assistant coaching stints after leaving KU following the 2009 season, but neither lasted long and Mangino now seems to be enjoyed the retired life.

None of the head coaches in the post-Mangino era did well enough in Lawrence to earn a second opportunity at the major college football level. And, believe it or not, Turner Gill, who went 47-35 at Liberty and has since retired from coaching, had by far the most successful post-KU stint of KU’s recent football coaches.

In addition to winning 47 games in seven seasons at Liberty after leaving KU, Gill led the Flames to four first-place finishes in conference play and a trip to the second round of the FCS playoffs in 2014.

Gill, Charlie Weis and David Beaty were all fired. And interim head coach Clint Bowen returned to the assistant coaching ranks under Beaty while working one year for Les Miles before moving on to run the defense at North Texas this offseason.

Other than Gill, Bowen is probably the coach who has had the most success since sitting in the KU head coaching chair. And I wouldn’t rule out the idea of him still becoming a head coach someday. That will all depend on how successful he is at North Texas during the next few seasons.

Having said all of that, the short answer to your question is that you have to go back to Glen Mason to find the success you’re talking about.

After leaving KU in 1997, Mason went on to coach 10 seasons at Minnesota. He led the Gophers to 64 victories and seven bowl appearances during that time.

In nine seasons at Kansas, Mason led KU to a record of 47-54-1 and also won the two bowl games he took the Jayhawks to.

All of those names, which represent a huge chunk of the modern KU football era — dating back to 1988 — are merely a reminder of why it’s so important for Les Miles to find his footing and provide some consistency at Kansas in the years ahead.

Whether that happens or not remains to be seen. But given the fact that he turns 67 in November, I can’t imagine Miles being the answer to this question if asked a few years down the road.

We’ll stick with email for this week’s second question, which comes from Gunnar Kykland, who asked a two-parter: Do you think Coach Self will complete this school year? Do you think this is his last year at KU?

To answer your questions quickly, I do and I don’t.

Now, let’s get into that a little more.

We still have no idea how long it’s going to take the Independent Accountability Resolutions Process to review, hear and rule on KU’s infractions case.

The smart money is on things still being unresolved well into 2021, which obviously increases the chances of Self both coaching the Jayhawks and completing the season in 2020-21.

But even if a ruling does come before then (again, highly doubtful), I still think Self will complete the season and be at Kansas for several more years.

That’s not to say KU is going to come through this thing without some kind of punishment. Given the number of Level I violations levied against the program and the severity of the charges, you have to think that some of it will stick.

But I think it’s also likely that some of it won’t and the punishment will wind up somewhere in between the NCAA dropping the hammer and KU getting off scot-free.

Even if Self is personally held accountable for some of the violations — remember, there is a head coach responsibility charge in play — I think it’s more likely that would lead to a suspension of some kind (10 or 20 games, perhaps) and not something that would force Self or the program to part ways.

Self has said throughout the past couple of years that he has no plans to run from this thing and that he wants to dig in and help restore Kansas to where he believes the program belongs on the national scale, regardless of what penalties are handed down.

I don’t think you can overlook his motivation there. And I believe him 100% when he says he wants to coach at KU for a long time still and that this whole ordeal has motivated and refocused him to deliver at an even higher level than he already has.

Time will tell how it all plays out, of course. But no matter what the results are, I think Self will be on the sideline throughout 2020-21 and well into the future.

Another email question, this one from Santiago Escobar, asks how the scholarship numbers are looking for Kansas football and whether I’m pumped about Whataburger coming to the area?

Thanks for the question, Santiago. I’m going to be completely honest with both of my answers.

First, I like Whataburger, but I’m not going to make any special trips over to have it. I’m more of an In-N-Out fan and am also perfectly happy with Five Guys or Culvers (underrated) or any of the half a dozen outstanding local spots where you can get a great burger right here in Lawrence.

Now, Torchy’s Tacos on the other hand? I will make a special trip over for that and suggest you do the same if you’ve never had it.

All right. Now on to your real question.

I haven’t had time to dive too deeply into the scholarship situation, but I know it’s improving. Big time.

They’re not all the way out of the hole that Weis and Beaty created yet, but Miles is absolutely attacking it the right way, by filling classes with almost entirely high school prospects and using patience, along with player development, as one of his biggest weapons in the rebuild.

I know we don’t know exactly how the 2020 season is going to play out yet — or even if it is — but if there’s a silver lining in this whole mess, I think it’s with regard to KU’s scholarship numbers.

Although the games will still be competitive and people will still be driven and feel pressure to win as many games as possible, I just can’t see how anyone can judge any program, positively or negatively, for anything that happens during a global pandemic.

If the Big 12 goes to a conference-only schedule or KU can’t play a full schedule for some reason, I still think the practice time and whatever games are played can go a long way toward helping to develop the young talent that’s here.

And then, when they return next year, it’ll almost be like starting from ahead.

I know that does not exactly answer your scholarship question. And I promise we’ll take a closer look at that soon.

But I know it’s getting better and it’s largely because Miles has had the patience and discipline to sign a bunch of high school guys and wait for them to develop.

By the start of Miles’ fourth season, I think you should start to see both of those things pay off, with Kansas nearly all the way back — if not entirely — to its level of 85 scholarship players and with these young guys Miles has signed in Year 1 and Year 2 moving into roles as upperclassmen.

He’s still not going to get the 4- and 5-star guys he got at LSU, but he has a plan, he’s filling needs and he’s recruiting to a specific system, with a vision for a few years down the road in mind.

Those are all great things for the future of the program.