Will No. 2 KU lose before its rematch with Villanova? 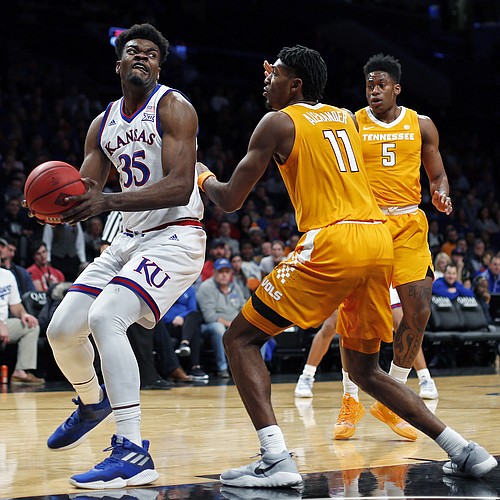 No. 2 Kansas has a perfect 5-0 record to date, but it has been anything but flawless.

KU needed overtime to finish off Tennessee in a battle between a pair of top-five teams. Kansas held off a second-half surge by Michigan State in the season opener to claim a victory in the Champions Classic. Senior Lagerald Vick went bonkers during the team's only two home games to fend off Vermont and Louisiana in Allen Fieldhouse.

Kansas has a pair of home games and a contest in the Sprint Center remaining before its much-anticipated rematch with Villanova. The Wildcats downed the Jayhawks in the Final Four last year before eventually winning the national title.

That leads us into the first question of the latest edition of Ask Us Anything.

Odds of Cliff Kingsbury coming to KU as a QB coach?
Will Silvio play this year?
Does KU slip up before playing Villanova, if so who against?

None by Keven Courtney

Well, based on recent reports, it looks like Kliff Kingsbury is going to be finding employment elsewhere. As a result, I will dive into the question about Kansas slipping up against anyone before Villanova.

If I were a betting man, and I certainly am, I wouldn’t bank on KU dropping a game before the rematch of last year’s Final Four. According to KenPom, Kansas has at least a 95 percent chance of winning in each of its next three games that lead up to the showdown with Villanova.

The Jayhawks play two of those three games in the friendly confines of Allen Fieldhouse, while facing New Mexico State in the Sprint Center. That game is the most likely loss for Kansas, though even that seems far fetched.

No. 2 KU has yet to really put all together during this 5-0 start to the season. The first half against Michigan State was the closest Kansas has looked to being worthy of its No. 1 preseason ranking.

At some point, you would think the Jayhawks demonstrated that dominance again, and I’d bet fans see a version of that during this three-game stretch. As a result, it just doesn’t seem likely that KU will have a loss on its resume ahead of the home meeting with the defending champs.

a. Step 1 (and most important) for the Les Miles regime is... ?
b. More of a concern... Dok's inability to stay on the floor or the team 3 point defense?
c. What do the offense efficiency numbers look like going 2 bigs and 3 guards vs. 1 Big and 4 Guards?

All three of these are great questions, so I’m going to go ahead and make this a questions No. 2 through No. 4 for this edition of Ask Us Anything, and you can’t stop me.

I suppose the easy answer would be filling out his staff, seeing as he can’t coach the 2019 season all by himself on the sideline. Wouldn’t that be fun to see though?

However, I’m going to go a different route with my answer. I think the first and most important step for Les Miles is recruiting. KU Athletic Director Jeff Long said he made the move when he did because he knew how important recruiting was, particularly with the early signing period inching closer.

Miles is not only starting late in the game, but he’s also dealing with a limited number of available scholarships. That’s what makes this so important, because Miles really has to hit on a good majority of his recruits in order to turn this thing around sooner rather than later.

Of course, the real answer is making sure Pooka Williams stays at KU. Yet I don’t think he’s likely to leave, so focusing on putting talent around Pooka should be the most important thing Miles does in the next month.

No. 3: More of a concern for KU hoops — Dok’s inability to stay on the floor or 3-point FG defense?

My first thought was to go with Udoka, because he is arguably the team’s most important player. After all, 10.4 plays per game for Kansas end with a post-up by Azubuike. The Jayhawks lead the country in post-up usage with a rate of 19.7 percent, according to Synergy.

That being said, I’m more concerned with the team’s inability to defend the perimeter. Per KenPom, opposing teams are shooting 37.8 percent from deep against Kansas. That mark ranks 285th in the nation.

More than that, though, teams are going into the game against KU with an emphasis on shooting the long ball. Louisiana forward Justin Miller admitted that after he recorded a career-high 22 points against KU. Marquette drilled 11 triples on 21 attempts in the first half alone against KU’s defense.

Azubuike, meanwhile, is averaging just two minutes less per game than he did last year. For me, the answer to this question is pretty simple. The Jayhawks need to fix their perimeter defense if they hope to cut down the nets in April.

No. 4: What do the offense efficiency numbers look like going 2 bigs and 3 guards vs. 1 Big and 4 Guards?

This is a tough question to answer, because it is impossible to find lineup-based efficiency numbers on Synergy or KenPom.

I do think it is easy to tell that KU’s offense looks more comfortable in a four-guard lineup, which is probably because that’s what this team has done the last two years.

So, it’s safe to say that KU should try to incorporate more four-guard lineups.

At first glance, I thought it was surprising when watching the game, but K.J. Lawson did very well in his 19 minutes of action.

To put that in comparison, Lawson had a total of 17 minutes in his previous four games. This goes back to what I was saying in the previous question, but I would like to see KU use more four-guard lineups, which could include Dedric Lawson at the 5 and K.J. Lawson at the 4.

Of course, that’s not to say K.J. Lawson should and will play 19 minutes again, but he did well and even collected six rebounds. More importantly, it allowed KU to create some space and let Dedric Lawson go to work as the lone big man inside.

Mitch Lightfoot, who is still the first player off the bench, will get his opportunity to make an impact late in the game at some point this season.

KJ Lawson is not that good.

I mean some might say what's the problem with .667 shooting from the floor including .500 from 3? Well...he scores 2.8 per game. Small sample size. He's not a real threat to score and he's often out of position on defense and even when he IS in the right place, the offense can take him to the hole.

Yes, he might improve with time, but before I sing his praises he NEEDS to.

Your point is well taken, but I think one other reason that it might be good to play him is that he and Dedric will have great chemistry together and anticipation of where the other will be on the court. That's always the case with siblings who have grown up playing together.

BTW, one thing that wasn't brought up re which was more worrisome (Doc being in foul trouble or defense of three-pointers) was Dok's FT shooting. That's going to be an issue throughout the season at the end of close games.

Great point about the chemistry. I have noticed that KJ can get the ball to his brother.

Matt, I noticed that you didn't respond to the question of whether Silvio will play this year. Is that because you feel like there's nothing new to add at this point?