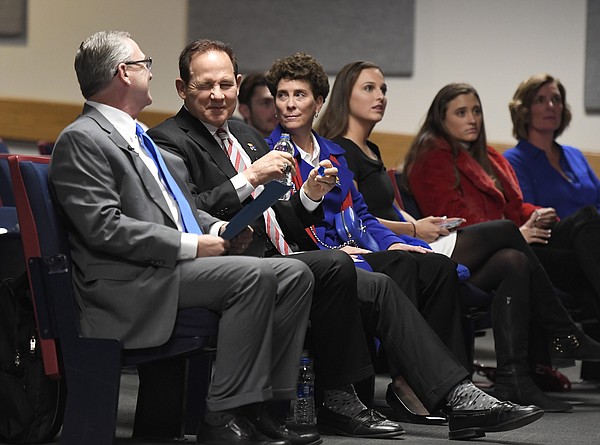 The past few days inside Anderson Family Football Complex, according to those who would know, new Kansas football coach Les Miles has stayed busy by assessing various aspects of the Kansas football program he just took over.

Think: meetings, phone calls and more meetings and calls, mixed in with whatever the new man in charge can do to settle in and get comfortable.

Miles has spoken with assistant coaches from his predecessor David Beaty’s staff and met with players, as well.

While no hires have been announced as of Wednesday afternoon that could change quickly.

And that leads us right into our first question for today’s post.

Does Les Miles have a time line of when he would like to have the coordinators hired? #AskKUsports

I asked Miles during his introductory press conference how long he thought it would take to get his staff in place. And while he didn’t give a definitive timeline for the process, his answer showed that finding the best coordinators he can will be his priority.

Miles doesn’t have to rush these hires and he made it clear from the day he took this job that he had been having conversations with potential assistants and coordinators already and would continue to do so.

This week has been the first time Miles could really speak with potential coordinators, too, because last week many candidates were busy preparing for the last game of the regular season.

As Miles speaks with potential coordinators this week it is also likely he will act quickly if it becomes clear someone he wants to bring on board is interested. He told the Journal-World recently that having coordinators in place would be one of the most important steps for him as he fully attacks the recruiting trail for 2019.

Michael Hinton: Arkansas Democrat-Gazette Sports' Wally Hall wrote a column that referenced the Razorbacks' losing football season(s) and Jeff Long's contributions. What are your thoughts?   Things obviously ended poorly for Jeff Long at Arkansas, his previous stop as an athletic director. Long was fired in November of 2017 after close to 10 years heading the athletic department at the SEC school.

Though Long’s hiring of Bobby Petrino brought the Razorbacks victories and appearances in both the Sugar and Cotton bowls, that relationship ended in an ugly fashion when Long had to fire Petrino in 2012, in the aftermath of the coach’s motorcycle accident. The whole ordeal eventually revealed Petrino had hired his mistress to work for the football program and the coach misled members of the athletic department.

Long had interim coach John Smith handle the football team in 2012, and the Razorbacks went 4-8.

When Long hired Bret Bielema away from Wisconsin, Arkansas finished 3-9 in 2013 before Bielema posted a 22-17 combined mark for the next three seasons. But Arkansas fell off again in 2017, going 4-8. Long was fired shortly before the season’s conclusion and soon after Bielema was done, too.

Even before Arkansas finished 2018 at 2-10 — with its .167 winning percentage going down as the worst in program history — the school’s football fan base didn’t mind blaming Long for its current state. I had a few Razorbacks supporters email me this past summer just airing their grievances about his time there.

Does that mean Long’s hiring of Miles will go so poorly? Of course not. But it’s also important for everyone to step back every once in a while and realize it is way too early to tell how the next few years will play out for KU football.

KU football attendance really began falling off a cliff near the end of the Charlie Weis era. But it officially went kersplat in 2018, with announced crowds in the 15,000 range at each of the Jayhawks’ final three home games of the season.

That’s what makes 40,000 such an ambitious figure for Miles’ KU debut — slated for Aug. 31 against Indiana State.

Even so, the KU fan base seems genuinely fired up about the program’s latest reboot. And between the intrigue surrounding Miles and having a chance to watch Pooka Williams perform his unique form of on-field voodoo, I think KU can get there.

Nine months out, I will take the slightest of overs.

With Les Miles, how do u see the KU-Louisiana connection going forward? Do u think he may retain Hull? Will Pooka stay? #AskKUsports

None by Steve Grimm

Though nothing is official yet, it sure seems likely that Miles will keep Tony Hull, KU’s Louisiana recruiting guru, in place.

And, with Miles having spent more than a decade living and working in Louisiana, I think that pipeline will only grow stronger in the months and years ahead.

Both Miles and Hull have strong connections down in the New Orleans area, and while the very best players from down in “The Boot” will likely continue to pick SEC programs, Hull has proven he can get coveted prospects to KU.

With Miles in place, the number of talented Louisiana players KU is able to sign should only increase — even though the new coach has made clear his plan to recruit heavily near his new home, too.

Oh, yeah. And, no, I don’t think fans need to worry about Pooka Williams leaving. Just my gut feeling.

Who are some of the names being considered for OC and DC?

None by Foster D. Coburn III

I’ll begin by saying this: KU has done a good job thus far of keeping Miles’ search for his coordinators under wraps.

I’m guessing a lot of that credit goes to Mike Vollmar, KU’s senior associate AD for football administration, who, like Long and Miles, has great connections throughout the college football universe.

Fans obviously can’t wait to find out if Miles can bring in some more big-name coaches for his first staff. But I get the sense most of the people around the KU football program — except for Miles, obviously, and probably Vollmar — don’t yet know how this will all play out.

It’s probably worth monitoring the status of recently fired UNC coach Larry Fedora, as well as various members of his staff. One of Miles’ sons, Manny, was a backup QB at UNC, so Miles has to know those coaches fairly well.

John Papuchis was Fedora’s defensive coordinator at UNC, and he was a graduate assistant at KU from 2001-03. Papuchis also worked for Miles during the new Kansas coaches first three years in Baton Rouge, La.

Before Fedora became a head coach at Southern Miss, he was an offensive coordinator at Oklahoma State from 2005-07 (after Miles left that program to go to LSU).

I’m sure the pool of candidates will be large and I think it’s a safe bet whomever Miles hires to lead the offense and defense will have plenty of experience.

I really enjoy articles and appreciate the insights. Thank you.

And what about the Rams OC? Any chance Long was looking for coordinators as well as a head coach?

And for the fashionistas - Do Les and Smacker have any red in their wardrobe?