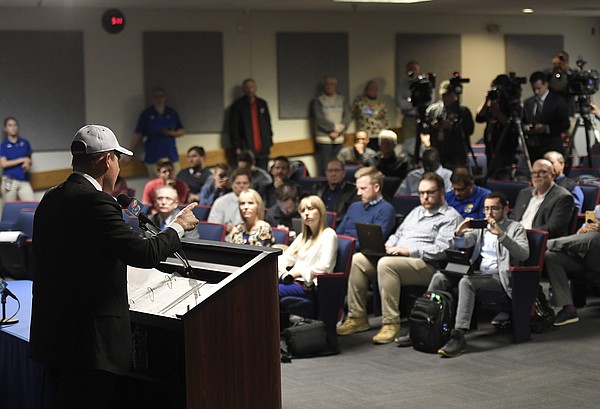 Everyone seems to have an opinion on whether or not the Les Miles experiment will work at Kansas.

Regardless of your belief, most people seem to agree that it is going to take some time for the Jayhawks to climb out of the bottom of the Big 12 conference. KU has not posted a winning season since 2008, but there seems to be optimism around the program in the first time in a long time.

Whether or not that optimism turns into success remains to be seen, of course.

But a large part of that will ultimately come down to whether or not Les Miles can prove the game has not passed him by since being fired from LSU midway through the 2016 season. Sure, Miles won't get the same players at Kansas that he did at his previous stop, but he's succeeded at multiple places in his career.

Miles will have to prove that the time away from college football was beneficial, and that he's ready to coach in the Big 12 again. That leads us into the first question of the latest edition of Ask Us Anything.

From Sam Bruning, via email Could you see Les Miles going away from his old school offensive strategy and using more of a traditional Big 12 air raid offense?

This is obviously the big question, right?

Les Miles was asked multiple questions about his offensive strategy during his introductory press conference. It was a reasonable concern to wonder if Miles, who is 65 years old, is able to adapt to the modern age of college football. Forget the Big 12, this was a concern for wherever he ended up.

During Sunday’s conference, Miles insisted that he used the passing attack when he had a competent quarterback. Benton Smith wrote about it the other day, of course, but there is some truth to that. In 2013, LSU senior quarterback Zach Mettenberger threw for over 3,000 yards.

That being said, I don’t expect KU to start slinging the ball around at a rate similar to some teams in the Big 12. Perhaps my opinion will change depending on the offensive coordinator that Miles selects.

As a result, it is not hard to imagine Miles being able to throw the ball more than he showed during his stretch at LSU. However, personnel influences this more than anything else, and KU will have a loaded backfield led by Pooka Williams for the near future. It might be more wise to lean on the ground game and control the clock, as Kansas tried to do against Oklahoma this past weekend.

#AskKUsports What do you think of luring Snyder to KU if he's forced out at KSU?

None by Randy Bombardier

Obviously, Kansas State coach Bill Snyder would never agree to this in a million years.

More importantly, it would be foolish for KU to even consider it, which I don’t think it would. Sure, Snyder has been tremendous at player development, and has dominated in-state recruiting for a long time. But there would be reasonable skepticism if Kansas hired 79-year-old Snyder for a prominent role after tabbing 65-year-old Miles as the head coach.

That whole situation has been a sour end to a legendary career. Snyder, who has won 215 games in 27 season, deserved to ride off into the sunset after what he accomplished for the K-State program.

But this entire season has been bizarre in Manhattan, with Snyder keeping players from speaking to reporters during the last two weeks of the media availability. Earlier this season, Snyder snapped at KMAN radio sports director John Kurtz for asking about the quarterback situation and told him, “you write what the hell you want to write.”

Multiple publications, including the Kansas City Star, have published columns calling for Snyder to retire.

None of this would make KU fans excited about the prospect of Snyder joining the program in some capacity. More than that, though, it has been disappointing to see this is how a legendary coach will close the book on his illustrious career.

@mctait #AskKUsports What kind of crazy butterfly-effect would have been felt if Pooka played week #1?

This is an interesting question, because we all assumed that the loss to Nicholls in the season opener marked the unofficial end to David Beaty’s time as the head coach of Kansas.

After seeing what Williams did over the next two weeks, I’m certain that KU wins that game if he is able to play in Week 1. Yet I’m not so sure that changes the course of the season, even if that is a lame answer to this hypothetical scenario.

Because of the relationship that Les Miles and Jeff Long have, I think it is safe to assume this was always going to be Miles’ job if he wanted it. You can argue that KU should have beaten K-State with a better coaching effort, but I’d counter with Kansas should have lost to TCU if it weren’t for a fortunate fumble late in the game.

In the end, I think Pooka Williams playing in the season opener only changes just that. KU would have one more win, and Beaty still would have been fired sometime in November. I certainly don’t think the Jayhawks starting 3-0 would have changed much about the Big 12 games, if at all.

What are the rules against a playing a 6 year senior? Asking for a Joe Dineen. #AskKuSports

None by Fewer Miles

Why stop there? KU should try keeping Steven Sims Jr. and Daniel Wise for another year as well. All jokes aside, I do feel for someone like Dineen. He loves this program deeply and has given so much for it. Dineen, more than anyone else, deserved a chance to play for someone like Les Miles and been around when KU had a shot to have more success.

Of course, Dineen and Wise wouldn’t even consider coming back for another season if they could trick the NCAA into letting them since both players are headed for the NFL.

As a biology teacher, I’m curious what your favorite animal is.

None by Andrew Taylor

I must admit, I have never once thought about this question.

So I went and took a BuzzFeed quiz about which animal should be my new favorite. Based on my answers, I got sea turtle as my outcome. Can I just go with that?

Actually, I do love sea turtles and that probably would be my answer. How does BuzzFeed know me so well? When I was kid, I had an aquatic turtle as a pet and his name was Crush. He’s the only pet I have ever owned that was all mine, and I was responsible for taking care of him.

Thanks for your question, now I miss Crush.