Picking a fictional coach to lead the KU football team 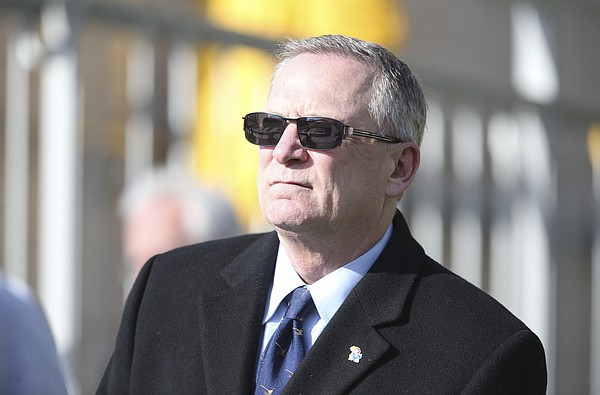 Kansas athletic director Jeff Long watches from the sidelines in the fourth quarter of the Jayhawks' 21-17 loss to the Wildcats on Saturday, Nov. 10, 2018 at Bill Snyder Family Stadium in Manhattan, Kan. by Nick Krug

It’s a wild time of year for Kansas fans, what with the basketball season just underway and the university’s athletic director, Jeff Long, searching for the football program’s next head coach.

So there couldn’t have been a better time to fire up a new feature at KUsports.com, the “Ask Us Anything” blog.

We’ve had great inquiries already and we know there are innumerable more to come, and we encourage you to keep sending them our way.

You can respond to our tweets calling for questions each week — @Kusports — or you can send us your own Tweet using the hashtag #AskKUsports. You also can email us, if that’s easier. Just send your questions to sportsdesk@ljworld.com and make sure you put #AskKUsports in the subject line.

On to today’s questions.

Which fictional coach would you hire to run the KU Football team?#KUfball #Jayhawks

None by Books 'N Basketball

First off, I want to admit how much I love Coach Taylor’s character in Friday Night Lights. It made me want to pick him initially when I saw this question.

But I have my doubts that he would succeed at a program like Kansas in 2019 and beyond. Sure, he went 47-15 with four playoff appearances and two Texas state championship rings and deserves at least an interview with Kansas Athletic Director Jeff Long.

However, fans need to take a deeper look at the candidate. His teams nearly always came out flat in big games before a thrilling finish, almost as if it was scripted. Quarterback Matt Saracen, not Coach Taylor, actually suggested the hook and ladder to secure a state title in the first year.

That miraculous play saved Coach Taylor from being fired, because it would be hard to explain not winning one state title during the two seasons with Smash Williams and Tim Riggins in the backfield.

Coach Taylor demonstrated the ability to build up a program when he took over at East Dillon, though I’d argue he was fortunate to land a talent like Vince Howard at quarterback. Even with Howard as the signal caller, Coach Taylor did not show the ability to adapt to a modern offense, which would be apparent in the Big 12.

At East Dillon, Coach Taylor continued to run a majority of his plays under center. In fact, Luke Cafferty is the one who suggested moving to shotgun when he filled in at quarterback after Coach Taylor benched Howard. Coach Taylor eventually won a second state title on a hail mary touchdown pass, which again seemed almost too good to be true.

If you made me pick one on this list, I’d have to say to Coach Boone from Remember the Titans, though I’d have my doubts about his ability to adapt to the modern age of college football as well. After all, he did claim he hates trick plays and only keeps six plays in his offensive playbook.

A wildcat candidate that did not make this list is actually Coach Porter from Gridiron Gang. He demonstrated the ability to take over a completely new program and lead those players to a championship game in the first year. If Long wants a coach who has shown they can rebuild a program, he could do worse than Coach Porter.

#AskKUsports hindsight, but should KU have take a safety so they could kick off and pin KSU deeper?

None by Chris Kurtz

I like the premise of this question, because I thought it was one of David Beaty’s smartest coaching decisions during his KU tenure to take that safety against TCU.

But the situation against Kansas State was much different. The Wildcats needed just 2:16 to travel 60 yards on six plays and score the go-ahead touchdown. If KU takes a safety, K-State just needs a field goal to secure the win and it would probably have needed to go about 60 yards to do so.

Not to mention, the Jayhawks certainly had their opportunity to end that drive. On fourth down, K-State turned to the Wildcat on the opposition’s 48-yard line to pick up the necessary two yards. Alex Barnes had to bounce outside to pick up the yarage and keep the drive going. That play was more detrimental than anything else.

If KU takes a safety, K-State would have likely milked as much clock to set up a game-winning field goal. Yet the Jayhawks had a chance on their final drive to make something happen. The screen to Pooka Williams on the final offensive play certainly looked like it would have worked, if quarterback Peyton Bender doesn’t lose the ball.

Obviously this is all hypothetical, but I do think KU not taking the safety was the right call. I just hope that we are analyzing more decisions like this in the years to come, because it is far more interesting than tracking airplanes like our guy Benton Smith has been doing the past 10 days.

#KUFBall just became the 3rd most attractive coaching job, and that position will get worse every week. Don’t we need to get our guy now?

This is a fair question, and speaks to why Long took action after nine games in 2018.

But I’d argue that the fact that this is even a question is a testament to the impact of having Long as an athletic director. In the most recent coaching search, KU is probably not fishing in the same pond with programs like Louisville and Maryland. It is why the Jayhawks ended up with a candidate with no head coaching or coordinator experience.

The fact that prominent candidates, like Les Miles, have even shown interest is credit to Long’s history in administration and athletics. Because of that alone, I think there should be less concern regarding other coaching vacancies.

Of course, the longer the coaching search continues, the competition for these candidates will increase.

If anything, I think finding a coach sooner rather than later is necessary due to the impact it will have on recruiting. The race to find KU’s guy and then get started on the 2019 class should be far more concerning than competing with other programs for Long’s man.

Is it truly possible a smart person like @CoachBillSelf would rush DeSousa to eligibility early, 3 months after Adidas arrests, if he truly knew his name would be in Adidas trial and forfeit games possible? I say no way. How about you?

Based on everything KU coach Bill Self has done as of late, I would imagine he did not know that Silvio De Sousa’s name would come up in the trial. Self made sure to hold out Billy Preston, and is currently keeping De Sousa out of competition this season.

Self has been proactive throughout much of this situation, so I find it hard to believe he heard anything about De Sousa until recently.

Yet it is worth mentioning that Self rolling with De Sousa last year was mostly by necessity. Kansas was depleted, particularly in the frontcourt last year, which was why it was so important to Self that the NCAA cleared De Sousa at the time. And De Sousa was a big factor in the team’s run to the Final Four.

This season, Self is able to be more flexible with his newfound depth, and that’s probably the biggest difference.

#AskKUsports Does the NCAA really want to dig into Zion's recruitment at KU when it will land in whatever Duke offered him?

Maybe I’m being naive, but I’m not sure why KU fans are so keen on dragging other programs like Duke into this. As a fan of college basketball, I’d like to see the best schools competing at the highest level.

This could certainly be just getting started, and if the NCAA really wants to fix things it may take a good look at some of the biggest names.

That being said, my current thinking is that it won’t end up coming down to that. I subject to the theory that if the NCAA came crashing down on someone, it would not be the big-time programs. I might be wrong, but it just makes sense from a financial standpoint.

I guess that’s a roundabout way of saying that you are right, the NCAA may not want to dig into Zion’s recruitment. After all, this year’s Duke team is going to be must-watch television all season and the NCAA certainly won’t be complaining about the revenue and positive attention that should bring.

Wow, y'all have a far more bitter picture of the NCAA than I do. Even with all their inconsistencies, dragging their feet, and lip service, I still believe the NCAA has the best interests of athletes and sports at heart. I think the NCAA will investigate this whole mess, but we have to remember that the NCAA does not have much power. It can't force people into interviews; it can't force people to turn over documents. Really, the only power the NCAA has is to investigate what people voluntarily give it. Where does it go from there if no-one wants to incriminate themselves?

Does anyone think differently about punishment for De Sousa. Presently he is being punished without a trial. And according to reports he hasn't done anything wrong. Should he be punished for actions by others like his guardian? Yes the NCAA punishes for wrong doings by others. John Wooden wasn't punished for his players receiving benefits from Sam Gilbert.

Clearly it's not fair. If I was a high school athlete on the NBA's radar I would seriously consider playing overseas or the G league.

If the NCAA did in fact have the best interests of athletes and sports at heart they would put cases like De Sousa on a fast track for the purpose of expediting a resolution, which would benefit of the athlete.