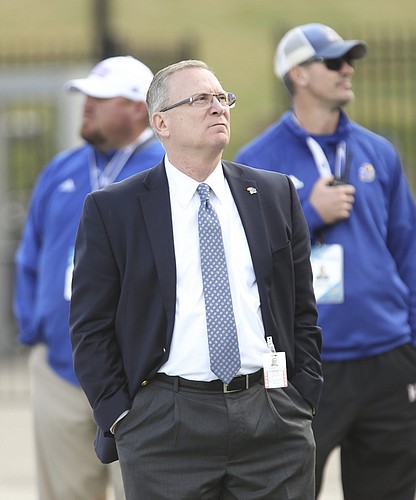 Kansas athletic director Jeff Long looks up into the stands late in the fourth quarter of the Jayhawks' 27-3 loss to Iowa State, Saturday, Nov. 3, 2018 at Memorial Stadium. by Nick Krug

It’s a wild time of year for Kansas fans, what with the basketball season just underway and the university’s athletic director, Jeff Long, searching for the football program’s next head coach.

So there couldn’t have been a better time to fire up a new feature at KUsports.com, the “Ask Us Anything” blog.

We’ve had great inquiries already and we know there are innumerable more to come, and we encourage you to keep sending them our way.

You can respond to our tweets calling for questions each week — @Kusports — or you can send us your own Tweet using the hashtag #AskKUsports. You also can email us, if that’s easier. Just send your questions to sportsdesk@ljworld.com and make sure you put #AskKUsports in the subject line.

On to today’s questions.

None by The Fitz

“Home run hire” is a good way to put it, because Jeff Long would feel good about the immediate future of the football program if he were able to convince Les Miles, Dave Doeren, Seth Littrell or Jason Candle to sign on with the Jayhawks.

But if I had to choose one I’d go with Doeren. He’s in the prime of his career at 46. He’s from the K.C. area. He worked as an assistant coach for Mark Mangino from 2002-05, when the program was on its relative rise, playing in the 2003 Tangerine Bowl and 2005 Fort Worth Bowl.

Doeren was great at Northern Illinois in the MAC and he’s doing really well in the ACC, with the Wolfpack already assured of its fifth straight winning season.

He knows how to win and he knows it actually is possible to do so at Kansas, because he’s experienced it.

I think Doeren would do a phenomenal job. But I don’t know that he’s the candidate Long is after. Or that Doeren would want to leave a program he has in a good spot for one that will need its next coach to take on a massive reclamation project.

Which benefits KU more - having Beaty coach the rest of the season or letting someone like Tony Hull take over and try to build some momentum towards the early recruiting signing period on Dec. 19? #AskKUsports

None by Dillon Davis

Well, it’s obviously too late to go the other direction. But it definitely would be nice to have a peek at that alternate reality in which Long goes with an interim head coach instead.

Saturday’s loss at Kansas State was obviously winnable for the Jayhawks. But too many in-game issues typical of David Beaty’s time at KU kept the Jayhawks from actually winning a Big 12 road game for the first time since 2008. Two. Thousand. Eight.

Quick aside: Shoutout to the fans who stick with this program week in and week out, year after year, losses upon losses. I don’t know how you do it.

Anyway, I think it would have been interesting to see how the offense operated if someone such as Clint Bowen or Bill Miller or Tony Hull were named interim head coach and Garrett Riley became the offensive coordinator.

As Dillon alluded to in his question, having Hull in charge in the interim may have helped in recruiting, but only if Hull was given some sort of assurances he would be retained on the next staff and he were able to hint as much to players back in Louisiana.

Obviously Hull wasn’t placed in charge, so we’ll have to see how quickly Long can assemble the next staff — and whether the next head coach will want to keep Hull around to help recruiting. Either way, the next staff will really have to hustle to build a 2019 signing class.

#AskKUsports Can you provide insight/clarification on what Long meant in his last press conf when he spoke about having about 15 less personnel compared to the rest of the Big12?

None by Kyle Sybesma

This is a good question and one I’m hoping to be able to expound upon further in the future.

Obviously Long wasn’t talking about on-field position coaches when he brought this up a little over a week ago. He was referencing the numerous support staff positions that exist at Power Five programs.

There are analysts, recruiting directors, video coordinators, personnel directors, quality control staffers and other positions that help make a football program function. According to the numbers Long cited, other Big 12 programs — and not just Oklahoma and Texas — have “anywhere from eight to 13 to 15” more employees in their football program than KU.

It’s tricky to find the exact numbers for all the programs, because you can’t just open a staff directory and count the names. As one person in the KU athletic department put it to me, Texas has far more strength coaches working for its team than what comes up on a published list of employees.

I’m guessing Long’s righthand man, Mike Vollmar, senior associate AD for football administration, called around to speak with staffers and/or administrators at the Big 12’s other nine schools to find out what type of deficit KU has been operating from.

I'll get STRAIGHT to the point:

Question: Will #kubball win the National Championship this year??? #AskKUsports

None by Douglas Holtzman

I thought this was a football blog.

Man, it’s the second week of November, so I’ll have to base my answer on what I’ve actually seen up to this point.

While KU obviously has a nice mix of depth and talent all over the floor, does this Bill Self team have enough athleticism to match up with say, Duke?

It’s definitely possible that Kansas could reach the Final Four and deliver the program’s first title since 2008. But if you made me pick a champion right now I’d go with Duke.

Holy hell, the Blue Devils embarrassed Kentucky at the Champions Classic, putting up 118 points. Between R.J. Barrett, the freaky Zion Williamson and Cam Reddish, Duke could have three of the top four picks in the 2019 NBA Draft — that’s if they don’t go 1-2-3.

I’m just going to assume Duke wins it all until I see something that makes me think otherwise.

And Dedric Lawson eventually rounding into his preseason All-America form might be one thing that would change my mind.

Disclaimer: I haven’t even seen Gonzaga or North Carolina or Virginia or Tennessee or numerous other teams play, so I would describe my opinion on the winner of a March tournament that ends in April as fluid.

Les Miles or the Field #AskKUsports

None by Jordan Elo

Is Les Miles at least interested in the idea of doing so at Kansas? Yes.

But that doesn’t mean it’s a done deal.

The longer this coaching search goes the less likely it is KU gets Les. If it’s over today or tomorrow, it seems that Miles would be the guy.

While nothing is concrete, I’d say this is trending toward taking a few weeks (from the start of this search on Nov. 4, the day Beaty was fired, to its conclusion). If Miles really wants to take on the burden of coaching at Kansas and Long really wants to hire him, they should be able to hammer out the details and make it official with a contract before the Jayhawks’ season is even over.

If you made me guess right now, though, I’d take the field.

How do you pronounce Doeren?

Was that just a small slip of the tongue...or is AD Long going to recruit/hire assistant coaches?

Would we really want to go from one position coach turned HC to another? Would Tony want that? He's obviously done a great job for us but we all hopefully have noticed there's a huge difference in making the jump to HC.

I would think the next logical step with Hull would be to name him as a coordinator. Since he hasn't even been an offensive or defensive coordinator before (IIRC), naming him as head coach would be similar to the naming of Beaty, and far too risky.

I don't get how people keep saying Dedric is an All-American. No offense. But the guy has been red-shirted for a season. I can't find any recent footages of him playing while under CTub. The few ones I could find was highlight of him shooting a bunch of 3s and passing. I want to believe the general consensus.. but so far, I don't see that. I hope I'm wrong.

He doesn't play above the rim and that is troubling.

If Long had really been evaluating the FB program since he arrived, July 5th, should HE be fired for cause already for:
1. waiting until we were 3-6 to fire DB, (given everything any/all KU fans have seen on that FB field the last 3+ years)
2. Allowing DB to finish out the season 'for the seniors' (look how well that has worked)
3. Not having a NEW head coach ready to go by the time our team was 3-6 and knowing the PRIMARY (read: 'only') reason he was hired as KUAD was to hire a new head fb coach ?
i want to like and/or trust this guy, but combine the above with the comments (however mis-read) he's made already about us fans, this is surely an inauspicious start for this guy. Not saying he can't make anything up, or wont, but for Goodness Sake's he's put himself behind the proverbial 8-ball. RCJH