What round will Joe Dineen and Daniel Wise get drafted, and will Les Miles change his offense? 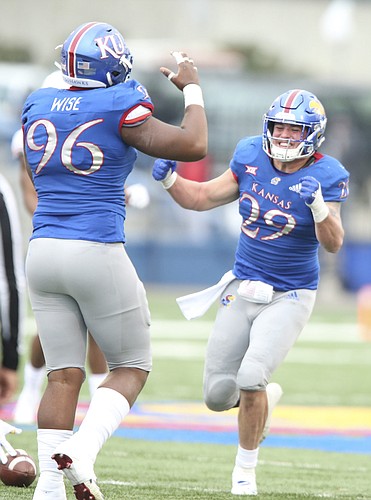 It is December, and people still care so much about Kansas football.

This latest edition of “Ask us Anything” illustrates how huge KU landing Les Miles really was. A majority of these questions are football-related, and I can’t recall the last time there was this much attention on the football program at this point in the offseason.

It is worth noting, of course, that all these questions came before freshman running back Pooka Williams was arrested on the suspicion of domestic battery and was ultimately suspended from the team. Continue to check our website as more details become available.

Yet the interest and optimism regarding the football program, which has won just 18 games this decade, has been especially apparent to me this week and I mentioned that on the most recent podcast. Part of that comes with the new coaching staff, though, this one just feels different to me.

With that being said, let’s dive into the football-heavy version of today’s questions. And remember, you can hit us up anytime on Twitter by using the hashtag, #AskKUsports.

Hey Matt -- it's early on the process, but have you heard any general projections on Dineen and Wise' s draft expectations? Middle rds? #AskKUsports

None by Jason Edmondson

This will start to become more clear when we get closer to April, but I like this question.

Both players had the option to go pro last year, as Daniel Wise was considered a mid-round pick and Joe Dineen was rated as a seventh-round selection or undrafted rookie. Both defensive players, of course, chose to come back to improve their respective draft stock.

Dineen leads the nation in solo tackles with 109, while the player in second has just 87 stops. According to WalterFootball.com, Dineen is rated as the 20th-best inside linebacker in the 2019 class and is likely anywhere from the sixth-round pick to undrafted.

Based on his numbers, I’m sure fans are wondering how Dineen couldn’t go higher. Again, that could happen following workouts in the offseason. Dineen is tremendous at filling the gaps, and stopping the run. However, NFL linebackers need to be able to cover tight ends/linebackers in the passing game from sideline to sideline.

An NFL team can develop Dineen in that area, and I’m sure a team will select him with that mindset. But that is why Dineen will likely still be a Day 3 selection, despite his impressive numbers at KU.

Wise, meanwhile, is the 16th-best defensive tackle and projected as a third or fourth rounder via Walter Football. Wise will need to improve his run defense for the next level, but he’s displayed a number of promising traits that will help land with an NFL team.

Could you see Miles going away from his old school offensive strategy and using more of a traditional Big 12 air raid offense? — From Sam Bruning via email

This has been talked about at length already via podcasts and articles on our site. In fact, Benton Smith wrote about how Les Miles thought about modernizing his offensive scheme during his time off.

I believe the hiring of Auburn offensive coordinator Chip Lindsey backs up Miles’ claim that he wants to adapt on the offensive end. Lindsey gave fans a sneak peak of his offensive philosophy during a one-on-one interview with KU director of broadcasting and play-by-play voice of the Jayhawks Brian Hanni.

“We want to create an exciting brand of football,” Lindsey said, “exciting brand of offense, try to create explosive plays and make us an offense that’s fun and exciting to watch — one that recruits want to come play for — and really put our identity in this league and on this university.”

Lindsey, who is known to run an offense with air raid concepts, is clearly here to help Miles go away from his old-school strategy.

To put that in comparison, Miles ran the ball over 60 percent of the time in five of his last six years at LSU. It is clear that Lindsey was brought in to bring more balance to an offensive system that became all-too predictable during Miles’ final years at LSU.

Self claimed Grimes to be the best guard he’s ever coached coming into the season; have we seen such a heralded prospect struggle so mightily?

This question came before Grimes’ most recent outing, which was actually quite good. In the win over Wofford, Grimes played 32 minutes and notched 14 points on 6-of-10 shooting.

Yet it is no secret that highly-touted players have struggled out of the gate in their rookie campaigns. Kelly Oubre didn’t score in double figures until his 10th game during the 2014-15 season. After sitting out for the early part of the season, Cheick Diallo had just two double-digit scoring efforts in 27 games with the Jayhawks.

KU has had other notable early slumps by freshman standouts, and that should be expected on some level. After all, these players are making a tough transition and having to figure out their role on a contending team.

But Grimes displayed his talent on the national stage in his debut during the win over Michigan State, and was a non-factor over the next five games. Self even pulled him in the second half of a pair of games, because KU was better without the lottery-level talent.

I do think the four-guard lineup, which Kansas will defer to without Udoka Azubuike, is better suited for someone like Grimes. With the space, Grimes can be more aggressive and attack the rim off high-ball screens. It is also possible that Grimes was more passive due to how hot senior Lagerald Vick was for that five-game stretch.

In the end, I think better days are ahead for Grimes. And he will be an important part of the team’s tournament run.

Parking at KU football games is terrible. Are there any plans to address the problem? The stadium currently seats 50,000 spectators, and that isn't very many in this era of big money. #askkusports

None by Keith Swinehart

As of now, KU has not revealed any plans to add more parking.

I personally haven’t had to worry about parking, so I’m not sure how bad it really is. The perks of covering these games is that I get to park in the garage, which seems fairly open when I arrive. Prior to this year, I lived nearby and just walked to KU games.

Quick aside: Seeing people sell parking spots at nearby houses is one of my favorite things about driving to the stadium. I like to compare prices, but most of the time it seems like prices are very similar. Why would someone pay the same price to park off ninth street, as they would to park one block from the stadium? I’d be selling a spot for less if I lived farther away from the stadium, but that's just my opinion.

That being said, if KU parking is as bad as you say it is, it is certainly something the program should address. If not, based on the recent buzz, I’d suspect parking will be even tougher during Miles’ first year at the helm.

Hey Matt is there any word on if Smacker Miles will have a roll with the program? #AskKUsports

None by Garrett Page

This doesn’t seem likely, seeing as she just tweeted about a new job last week.

Great news: I’m with @WeRBlueprint!Thrilled to join a team that cares about student-athletes as much as I do. I’ll help our game changers share their stories. Follow along as we support, connect & inspire athletes around the world!!

When Les Miles was introduced as the new head coach, I had the opportunity to talk to Smacker Miles after the press conference. She told me then that she was passionate about sharing stories of student-athletes, which appears to be her role with this new gig.

Smacker Miles certainly knows a lot about football, which was evident in our conversation and on her podcast with her dad. But she seems to prefer being involved in a media-related role rather than working directly with a football program.

Any idea as to the timeline for announcing the hiring of a new DC, LB, W&S, etc....... We know about the OC and DB hires. It's assumed that Tony Hull is still on the coaching staff (as well). But, what's going on with the rest of the staff?

Since Clint Bowen didn't visit Jayden Russell with Miles and Chevis Jackson, I assume he's out as DC. He might have met with him during some earlier visit, but none that I'm aware of.