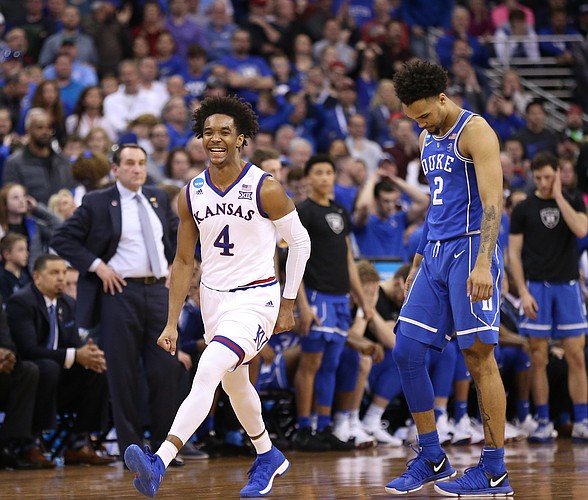 If only y’all knew half of what it took 🙏🏽🙏🏽#finalfour

Guess what...We did it again! Proved everybody wrong. Proud of my team!!! Final 4 bound

Everybody’s an expert — Some predict deep Kansas March run; others, not so much 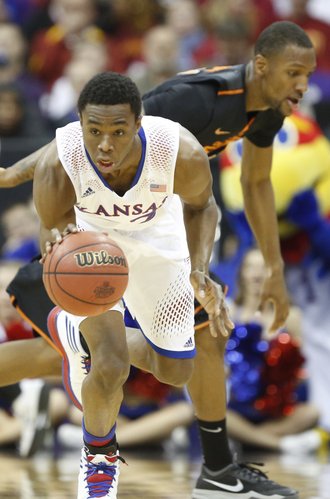 Kansas guard Andrew Wiggins takes off with a steal from Oklahoma State forward Kamari Murphy during the first half on Thursday, March 13, 2014 at Sprint Center in Kansas City, Missouri. by Nick Krug

This time of year, everybody seems to have an opinion about the NCAA tournament — and a bracket (or two or three) to go with it.

Who will go to the Final Four? Who will lose in the first round? Oh, it's called the second round now? Right.

If you can manage to pull yourself away from your bracket for a few minutes, you'll want to see what some of the experts think about Kansas University's chances during March Madness.

Due to the ultimate X-factor — how healthy is freshman center Joel Embiid? — chasms exist between the opinions of some.

Check out the abundant tournament chatter.

• The Sunflower State might have to shut down on April 7, if CBSsports.com's Gary Parrish is right.

Parrish thinks both Kansas and Wichita State will make it to the Final Four, and meet in the national championship game.

His winner: The Shockers.

The CBS site provides full brackets from 10 of its experts. Both Matt Norlander and Gregg Doyel chose Kansas to win it all.

• In a list of Sports Illustrated writers' Final Four picks, none of the four featured contributors picked Kansas to reach Jerry World, in Arlington, Texas, the destination all 68 teams are shooting for.

In fact, Luke Winn, Seth Davis, Brian Hamilton and Pete Thamel all picked No. 1 seed Florida to come out of the South. What's more, all four had the Gators as national champions.

The feature includes links to the complete brackets from each writer.

• Dick Vitale is rolling with the Gators, too.

Vitale likes Florida out of the South region, to be joined by Michigan State, Louisville and Arizona in the Final Four.

But Vitale is picking Michigan State to top Louisville in the title game.

• ESPN.com listed the Final Four picks from some of its other contributors, and only one of five had Kansas winning its region.

While Eamonn Brennan, C.L. Brown, Andy Katz and Myron Medcalf all had Florida advancing out of the South, Dana O'Neil went with Kansas.

• Mike DeCourcy of The Sporting News ranked every team in the field, No. 1 through No. 68, based on "perceived ability to win the championship — involving seeding, bracket placement, pro-level talent, efficacy at both ends of the court."

Using those parameters, he placed Kansas at No. 4, behind Arizona, Michigan State and Florida (a potential Elite Eight opponent for Kansas in the South region).

• According to SI.com's Hamilton, Kansas is the best No. 2 seed in the field (assuming Embiid is healthy at some point).

KU isn't the only team from the South Hamilton considers the best on its line. Others: No. 1 Florida, No. 7 New Mexico, No. 12 Stephen F. Austin and No. 13 Tulsa.

• In a list of 16 observations about this year's tournament, Troy Machir had a couple interesting Kansas-related tidbits for SportingNews.com.

Kansas has made the tournament for 25 consecutive seasons, the best active streak. Second is Duke at 18, while Michigan State is third, with 17.

Also, a couple of '80s national champions as players will square off as coaches in the first round: Steve Alford played for Indiana's title team in 1987, and Danny Manning led KU to the 1988 championship. They'll face each other as head coaches in the South's No. 4 vs. No. 13 game: UCLA's Alford vs. Tulsa's Manning.

• ESPN.com writer Medcalf, who was in Kansas City, Mo., to cover the Big 12 Tournament, wrote a list of 10 bold tournament predictions. 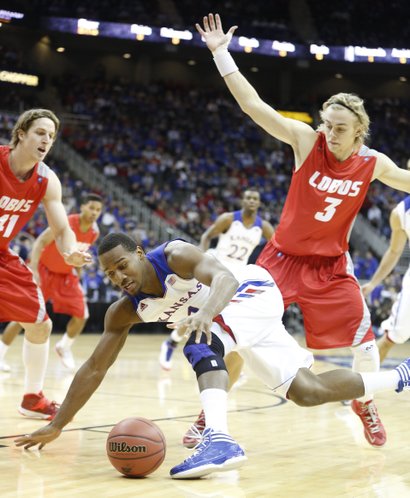 Kansas guard Wayne Selden tries to maintain control of the ball as he is defended by New Mexico players Cameron Bairstow (41) and Hugh Greenwood (3) during the first half on Saturday, Dec. 14, 2013 at Sprint Center in Kansas City, Mo. by Nick Krug

While some might be surprised he picked Iowa State to make the Final Four, he also thinks Kansas won't make it past the first weekend of The Big Dance.

"The Joel Embiid injury is a major problem for Kansas. Yes, the Jayhawks can still make a run without him. But that third-round matchup against a big New Mexico squad should be a concern."

• ESPN's Fran Fraschilla fielded tons of questions about the tournament, and answered a few about Kansas in the process.

Elite 8 looks strong right now but rematch with UNM dangerous. RT @Co11in_Fabac: @franfraschilla how far do you have Kansas going?

KU in a "war" barely. RT @Keyser24Soze: @franfraschilla Lobos or KU without Embiid?

Comes down to Tharpe/Wilbekin. RT @chrisconway3517: Kansas' chances if they make it to the Elite Eight against Florida? @franfraschilla