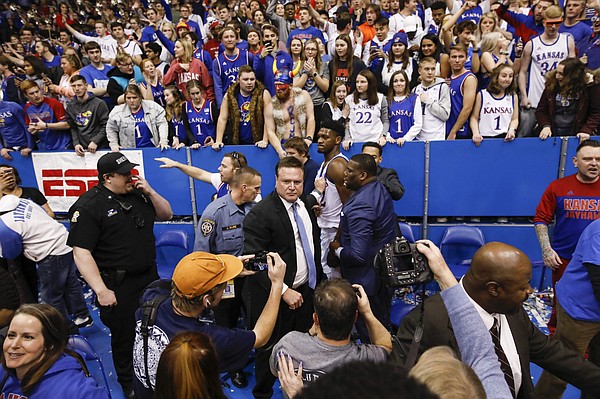 The wild brawl that brought an ugly end to the Sunflower Showdown at Allen Fieldhouse Tuesday night, of course, drew the attention of the entire college basketball world.

While opinions varied on the fracas, which spewed off the actual court and into the seats behind the baseline, some renowned national analysts called for swift action and suspensions after KU forward Silvio De Sousa and Kansas State big man James Love were at the heart of a confrontation that cleared both benches.

KU head coach Bill Self, who called the incident embarrassing, said after the game he expected to announce punishments on Wednesday. While those haven’t been announced as of the morning, that didn’t stop some national college basketball media members from immediately speculating about what’s to come.

A couple of former Kansas players, Devonte’ Graham and Scot Pollard, also shared via Twitter their thoughts on how the rivalry game concluded.

Here are some of the many social media posts regarding the altercation.

I guess it just meant something when I wore that jersey. More than whatever stupid ego trip caused this. Game was over. We won. Now players will be punished/suspended. How could any KU fan not be embarrassed? We are KU. We are better than this. https://t.co/48pw478jqf

I was at the Malice in the Palace. It didn’t galvanize our team. We lost half to suspensions and barely made the playoffs and got bounced in the first round and the franchise took years to recover. Stupid take. https://t.co/1yGxYvNc5x

In my 40 yrs @espn the fight at the Kansas State & Kansas game was as bad as it gets. So sad & embarrassing for a program rich in tradition . The @Big12Conference MUST COME DOWN HEAVY ON THOSE heavily involved .

It was sickening & very fortunate that there were not some serious injuries . Those involved must be heavily penalized by the @Big12Conference https://t.co/sNrnsWJq4H

My full thoughts on @KUHoops and Silvio De Sousa.. let me provide context abt what I said this morning on @GetUpESPN pic.twitter.com/06lluIQItW

This is a good point to be made. We can advocate for appropriate consequences and still have empathy. The world needs more empathy, especially when talking about young people. https://t.co/vtlYMHFYij

This is why standing over another player is immediately called a T pic.twitter.com/0KLfkG2OQU

The last brawl like this was the Crosstown Shootout in 2011. Here were the suspensions:

Folks who would have called the police or asked to speak with a manager if De Sousa had done that outside the arena now saying he wasn't in the wrong. Lot of fake support that these young athletes better realize they'll never get in the same situation once they're done playing.

The game was over. The steal was unnecessary, standing over an opponent was unnecessary, the words and shoves were unnecessary. The ensuing brawl was ABSOLUTELY UNACCEPTABLE. Each person involved (save for those attempting to break it up) knows better. Suspensions should follow. https://t.co/yiLMvheqhh

There were many actions that escalated this. However, there is no excuse for the ensuing fight. Punches thrown should lead to suspensions. Period. And, stop calling players “kids.” It infantilizes them. The NCAA calls it Men’s Basketball. They are adults. https://t.co/R4HD5BYZPs

Column: Silvio De Sousa wielding a stool as a weapon is the latest bad optics for Kansas and college basketball, neither of which can afford the credibility hits https://t.co/1tlMAOTgkV

Hoping it’s quick and swift today. No reason to drag this out. @Big12Conference and or both schools should make announcements before any practices this afternoon. https://t.co/gJ9SYKaO11

Go Devonte! Shut up Scot! Stand up like a man Long!

It's just what happens...

ok, i'll be honest, Pollard can go blank himself...i used to really like him....sanctimonious much Pollard? from what i remember, you used to be out there and an instigator and trash talker yourself.....Devonte? love you dude, way to have your teams back! also, after watching all the angles, Desousa lost his temper and should get a suspension, but every step of the way was instigated by k-state from pressing and fouling our walk-ons in the final 3 minutes....to the ridiculous steal, to shoving desousa and their redshirt player coming in fists a flyin......screw Weber......something about just looking at him makes me want to punch him.....

If De Sousa really wanted to disrespect the man, instead of standing over him after he blocked his shot he should have helped him up. That adds insult to injury. That sends a stronger message and punctuates the idea of winning with class whereas KSU plays the role of the sore loser. If he had done this, today everybody would be laughing at this clown who tried to steal the ball with 5 seconds left and got what was coming to him. It would have been the number 1 play on Sports Center. Instead KU lowers itself to KSU's level and gets another black eye.

Anyone who disagrees with Pollard should ask themselves one question: if De Sousa had it to do over again, would he have done it the same way? Pollard is spot on.

Right. No doubt it is embarrassing, but for both universities. Most of the focus from the pundits seems to be on KU. Is this because Silvio was the one with the chair? Or is it because it took place in AFH? Or is it because the K-State dudes were in street clothes as opposed to uniforms?

Dang. What, no comments from the Morris twins?

Only 2 former players? Misleading headline. Graham is moving up on favorite Jayhawk of all time. Rock Chalk!

Also, since MU got scared and left, TV has been wanting a KU-KSU rivalry to be real. It didn't take off when they carried our goal posts down Mass (Because MU was still around).

A 247sports article by a writer who says he was just the other side of the goal post said de Sousa dropped the chair an instant before Howard grabbed his arm, signifying that he had second thoughts about that action and changed his mind. I don't condone brandishing that chair at all but at least it shows he decided not to use it as a weapon.