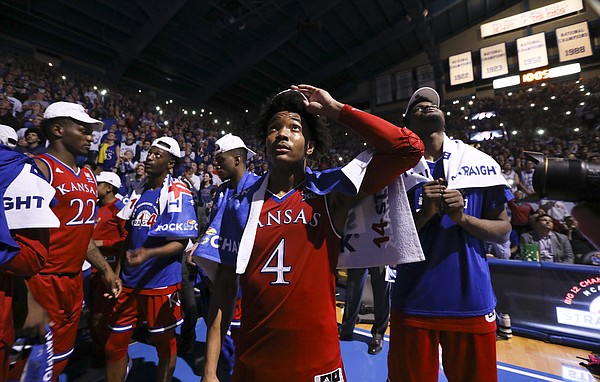 Kansas guard Devonte' Graham (4) watches a highlight video with his teammates following their 80-70 win over Texas on Monday, Feb. 26, 2018 at Allen Fieldhouse. The win gave the Jayhawks an outright win of their 14th-straight Big 12 Conference title. by Nick Krug

It took 14 years, and whether they were All-Americans, all-conference talents, role players, backups, glue guys or walk-ons, Kansas basketball players coached by Bill Self helped the program set an NCAA record for most consecutive conference championships in a row.

The pride Jayhawks took in their ownership of The Streak grew year after year, so inevitably they were going to experience some disappointment, along with nostalgia, when it eventually came to an end.

That day finally arrived Tuesday, in Norman, Okla., when the 2018-19 Jayhawks were eliminated from title contention close to a decade and a half after KU’s streak of titles began in 2005.

Many of the most prominent players from the previous 14 seasons and some others who watched it from afar weighed in through social media about KU’s crazy run of Big 12 dominance finally concluding.

Proud to have been a part of this as well as a witness to it. Mind you it took Sousa, Dok, and Lagerald out to lose it. If anyone is to blame for it not being longer, it’s my class. We only won 3/4.. #RockChalk pic.twitter.com/XjJ2FS2JCG

No one predicted 14 in a row when we started this streak, now it’s time to really appreciate it. What. A. Run! @KUHoops pic.twitter.com/17PjTzM7t6

None by Wayne Simien Jr.

So thankful to be a part of something so special i want to thank everyone who contributed to the streak #14InARow !!! This years team its ok Way to fight and not give up fellas heads up… https://t.co/V7rtVlATS1

14 straight years is INCREDIBLE! I salute all of the players who sacrificed individual accomplishments & put the KANSAS on the front of the jersey first during this phenomenal streak. I hope KU fans appreciate how special/elite this really is. #RockChalk pic.twitter.com/4DBS7k61lh

That’s how we goin out? That hurt

So it wasn’t just a bad dream? 🤦🏽‍♂️ Weird not having KU as Big12 champs, but glad I was apart of the streak. Something I can tell my kids and grandkids about someday. Congrats to Coach Self and the staff. Tourney time now!

14 in a row! All our coaches, staff, players, and most importantly fans/alumni have made this possible. We made history. All things end. We are still the best program in the country lol - Now something even better can begin! March Madness here we come 😈🔵🔴 #Rockchalk #KUCMB

None by Christian Garrett

14 straight. Unbelievable. One of the most impressive streaks you’ll ever witness in sports. Major salute to Bill Self, the staff, & to anyone who had a part in the steak. Im so proud that I was a part of the very first conference championship for Coach Self at Kansas. #RockChalk

None by Nick Bahe

All good things come to an end. Let’s start a new streak @KUHoops

I agree. Start a new one now.

Not bad. See if anyone else equals this.

I still can't watch the replay in espn. Was it that bad?

Ok, the search is over. Thanks, Jim.