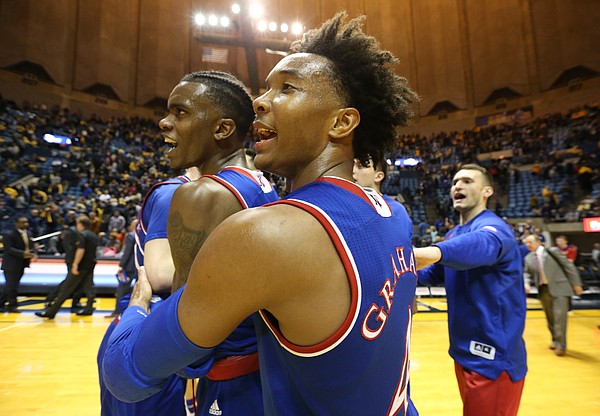 When two top-10 teams square off in prime time, the rest of the college basketball universe makes a point to tune in and watch the show.

ESPN’s Big Monday matchup between No. 10 Kansas and No. 6 West Virginia wasn’t always the most visually appealing display, but the Jayhawks’ unlikely rally for a rare “Country Road” win made it a captivating finish.

For the more prominent viewers — some former KU players, others national college basketball writers and analysts — the battle between two of the Big 12’s top teams and the Jayhawks’ first win at WVU Coliseum in five years not only proved entertaining but also telling.

Here are some of the social media reactions to KU’s 71-66 win, from around college basketball, including a couple from Jayhawks who made it possible.

Rock chalk. Way to go into Morgantown and get a big win......RCJH

Do what they say you can't ‼️💯😈#NEVERTELLWHATISAW

None by Wave Papi

The reports of our death were greatly exaggerated! #Questfor14 #RockChalk

I had finally come around to taking the field to unseat Kansas in the Big 12 this year. Then the flawed Jayhawks rise up, West Virginia shows signs of wilting at home, and now I don't know what to think again.

Whatever the result of this game Kansas has showed it is as mentally tough as any team in the country. Notice has been served.

Bill Self has questioned the toughness of this Kansas team. Jayhawks showed something tonight because you don't win in Morgantown without being tough.

Extraordinary road comeback wins for Kansas and Duke tonight. Thought both were toast.

Impressive impressive win by Kansas. Once more let’s stop talking about who else is gonna win the Big 12 until someone else wins the Big 12

Wow... @KUHoops just got a huge win on the road at @WVUhoops .. Graham was big time. @espn

I still think this is Bill Self's most vulnerable team in a strong Big 12. But no team plays with more pride than the Jayhawks. Just outhustled West Virginia. On the road. After they were down big. That's how you play with heart. They're gamers.

Devonte Graham looked like an All American tonight. That was something special. @TheAthleticCBB

That's a great road win for Kansas — but mostly a pathetic collapse by West Virginia. At home, with the Jayhawks on the ropes. Blew it. That should give Kentucky fans some hope for a couple of weeks from now.

Over the last two seasons, Kansas is 15-1 in Big 12 games decided by single digits.

Could somebody check on @JonRothstein?

Who is this idiot https://t.co/jAtKZ00rJF

my wife gives me this look all the time https://t.co/5Hp1gAKVLc

The Konate blocks remind me of my idea for the greatest NBA All-Star Weekend event that will never happen: Contested Dunking

None by Andy Glockner 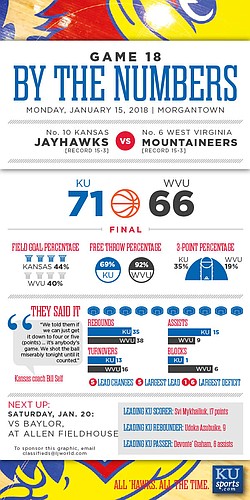 I can't stop smiling today. I keep worrying that people are going to start wondering if I'm losing it.

Was Seth taking a shot at Fran with that comment "...someone will blame the reffing at Allen Fieldhouse.."? I feel like he was. I HOPE he was, anyway.

I think that was a shot at Bruce Weber