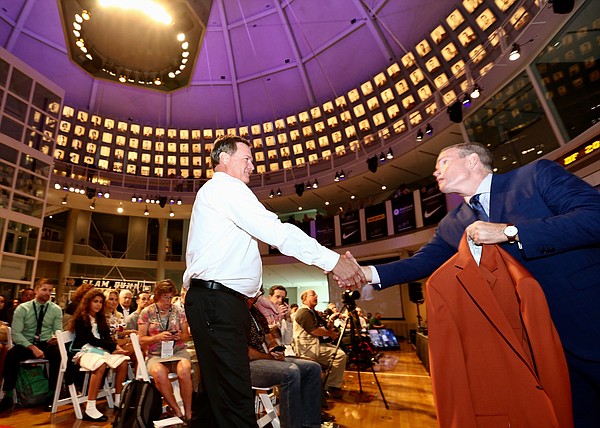 Self received his Hall of Fame jacket, which is made of a color described as "Naismith Orange," and gave brief remarks about starting his enshrinement week alongside several new Hall of Famers.

"When we all found out, I think, in April, I think we were all pretty overwhelmed with this. But this really hasn't hit me until we actually got to Springfield. Being in this arena, looking around, and seeing all the portraits is something that is very humbling and I certainly feel inadequate to be before you this afternoon."

#KUball coach Bill Self getting his Hall of Fame jacket, which is made of a color called "Naismith Orange" pic.twitter.com/raje9zLCII

Bill Self's brief thoughts about getting his Hall of Fame weekend under way... #KUbball pic.twitter.com/1N7zjuLuvP

Bill Self's presence @ the Hall of Fane shows up before you even enter the building, complete with a classic quote from his father #KUbball pic.twitter.com/Jv8Qp1idRI

Bill Self doing a Hall of Fame interview with NBA TV... #KUbball pic.twitter.com/v4BorKmQ9T

#KUbball coach Bill Self looks up at his picture in the Hall of Fame. Next to Phog Allen & in same row as Naismith. pic.twitter.com/ILoyw7hXZV

— KUSports.com's Matt Tait and Nick Krug are in Springfield to provide all kinds of coverage of Self's enshrinement week, so stay tuned to KUsports.com for more stories, videos and more.

Matt, what the hell! Did the Hall of Fame actually write "Kansas University" on that bench/stone/whatever that is?

I've heard a lot about that today... I promise we had nothing to do with that and, as far as I know, our former owners didn't either. Weird deal.

Even Kansas or KU would be a little better than that.