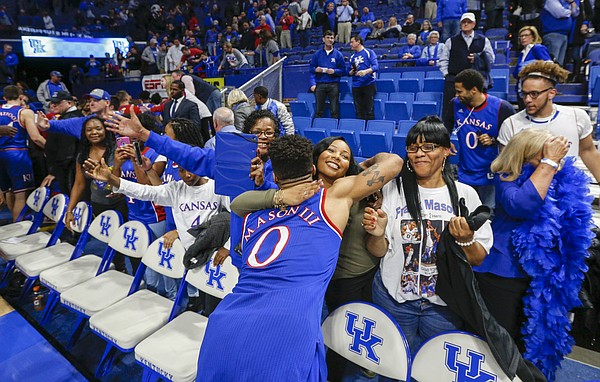 Kansas guard Frank Mason III (0) gives some of his family members a hug following the Jayhawks' 79-73 win over Kentucky, Saturday, Jan. 28, 2017 at Rupp Arena in Lexington, Kentucky. by Nick Krug

Bill Self will tell you his Kansas basketball team’s game at Kentucky Saturday night doesn’t mean as much as the Big 12 games against West Virginia and Baylor that bookend it. But the KU coach also realizes how important a showcase matchup such as KU versus UK is to fans and the people who follow college basketball closely.

As you might have guessed, when the Jayhawks toppled Kentucky Saturday night at Rupp Arena, it sent KU fans, and even some former and future players, into a frenzy on Twitter and other social media platforms.

Analysts and national journalists, too, had plenty of praise to send KU’s was following an impressive road victory.

Below are some of the highlight reactions to the Jayhawks’ win in the SEC-Big 12 Challenge, including some from the men who made it happen.

None by Markese Jacobs

Rock chalk. Way to go in there and get that win

Well How about them damn Jayhawks hell of a games fellas!!!!!rcjh

Let's get it #RCJH pic.twitter.com/euxYdzuk6t

so hyped on this bus right now ...but I have to be quiet because everyone is sleep....F it I'm waking everyone up..🗣LETs GOoOo!!! #kubball

I don't care what the gurus say Frank Mason is an NBA player.

None by Seth Greenberg

Super W for the Jayhawks over BBN. I will see KU Wed 9pm EST vs Baylor 4 1st in the @Big12 Conference Love the spirit in Jayhawk land

See you there @DickieV it's gonna be a doozy. @BaylorMBB is legit and @KUHoops showed us tonight what's up! https://t.co/pk4LHR4q1Q

None by Jeff Borzello

Early-departing crowd aside, that KU-UK game was really fun to watch, and inter-conference pairings in January are something we need to keep

Helluva coaching job by Bill Self. Shorthanded, amid major distractions makes a simple but smart decision to go zone. Changes everything.

Tonight was the 3rd time this season that Frank Mason III and Josh Jackson both scored at least 20 points each.

KU is 3-0 in those games. pic.twitter.com/HiSqtmemHr

No. 2 Kansas is the 3rd visiting team to win an AP Top-5 matchup at Kentucky.

The other two teams made deep runs in the NCAA Tournament. pic.twitter.com/LzABZz23XW

Kansas is 16-4 vs Top-5 teams under Bill Self, the best record in the nation during that span (minimum 2 games vs top-5 teams)

you have got to love embiid! always supporting the hawks.....i was curious about why wiggins never is mentioned...checked his twitter.....nothing about the game...just video game stuff......Wiggins was a good player at KU, but i just got the impression that he was putting his year in and was gone and it didn't really mean all that much to him.....could be wrong.....but Embiid will be one of my favorites to keep track of...

WOW KU is 16-4 against top 5 teams under Bill Self. That's an incredible statistic.

So much for the Kentucky fans saying back in New York in 2016: "Can't wait to get you in January, Coach Self." HA-HA----LOL. And btw, the guy that was Dorothy in the Kentucky crowd---He was plain dumb ugly!!!!!