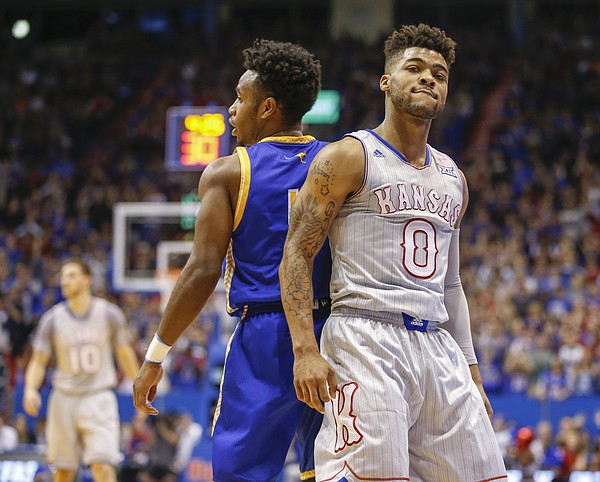 Kansas guard Frank Mason III (0) looks back to the cameras after hitting a three over UMKC guard Dashawn King (1) during the first half, Tuesday, Dec. 6, 2016 at Allen Fieldhouse. by Nick Krug

Nearly every time Kansas basketball coach Bill Self fields questions from the media, someone will bring up Jayhawks senior point guard Frank Mason III and the impact he has made this season.

“How good has Frank been?”

“What has Mason meant to your team?”

“Did you think when you were recruiting him Frank would turn out this good?”

Without hesitation, Self will highlight Mason’s toughness, driving, shooting, passing, rebounding, etc., and share his opinion that his senior point guard has been as good as any player in the country at this juncture.

Self isn’t the type to campaign for his players to win national awards, but such statements are his way of doing so in a low-key fashion. When Self talks, people around the college basketball world listen.

As KU keeps on winning and Mason continues to carry the team, it boosts his case for national player of the year honors. At CBSSports.com, Gary Parrish ranked the top 25 candidates for the ultimate individual award gave Mason No. 1 billing, edging out the heart and soul of defending national champion Villanova, senior guard Josh Hart.

Neither Mason nor Hart are going to be NBA lottery picks the way past Wooden Award winners such as Buddy Hield, Anthony Davis and Blake Griffin were, but both are integral parts of two of the nation’s best teams, so Parrish ranks them ahead of UCLA freshman point guard Lonzo Ball, who many expect to have a long, successful NBA career.

As can be found on sports-reference.com, Hart’s player efficiency rating of 29.5 is one of the best in the country, ranking sixth overall. But Mason isn’t too far behind, with a PER of 26.1 (27th nationally). 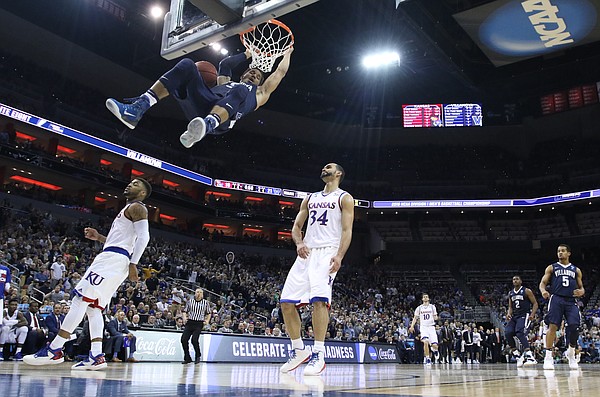 Villanova guard Josh Hart (3) hangs on the rim before Kansas forward Perry Ellis (34) and guard Frank Mason III (0) after a dunk during the first half, Saturday, March 26, 2016 at KFC Yum! Center in Louisville, Kentucky. by Nick Krug

Likewise, the debate between Hart and Mason, Parrish wrote, is close:

“I’ve had Josh Hart atop these Player of the Year rankings, and it's reasonable to keep the Villanova senior there. He's still fabulous and leading a team ranked No. 1 in the Top 25 (and one). But Frank Mason has never been far behind. And he's playing better than Hart lately. So now the Kansas senior is the headliner.”

The top 10 players in the running, according to Parrish, also includes one of Mason’s teammates, freshman Josh Jackson.

— See the complete list: KU’s Frank Mason moves to No. 1

While few would probably own it now, there were disparaging comments on this very site about Frank and his lack of national ratings when he was recruited and signed by Kansas prior to his freshman season. I can still remember in his press release Coach saying Frank was going to surprise some people with his toughness and his other basketball skill sets (paraphrase). Did Coach imagine he might be a candidate for POY his senior season? I doubt it. Will he win the award? Probably not. But he can be on my team any time. He gives everyone else on the team more confidence because Fearless Frank, Frank the Tank, Numero Zero, is out there on the floor with you. He may not get there, but as of right now, the best inch for inch, pound for pound player in the country is making a case for getting his number hung up there in those rafters.

Kirk Hinrich has been my favorite KU player for a long time, but I Frank Mason's pretty much even with him for me now. I just LOVE the way he plays. This team has some serious flaws and I'm not sure how far they'll go in the tournament, but without Frank they'd have been dead a long time ago.

So I guess he still has no shot at the Bob Cousy Award,let me see if he leads the team in scoring then that means the team is not winning and a number of other things that were said to not only eliminate him from Player of the Year consideration , but the Bob Cousy Award as well. By the way he could care less for any of those individual awards ,but there is only one award he is interested in and that is National Champion and that is a fact. Sometime to his detriment he has never played like that and never will, he just wants to win and what ever it takes to make that happen he will do it. As I have stated before don't take my word because I will always have a bias toward him especially when the actions shown are being overlooked or he is being downgraded.

Frank deserves every award. He is an absolute stud.

His family will someday see his jersey hung in the highest fieldhouse of the game. That in itself is a better honor than a media rating.