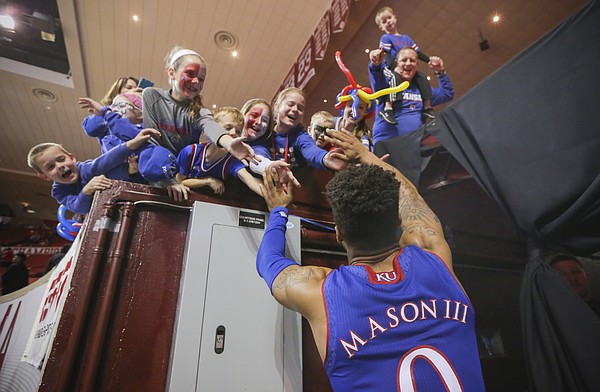 Kansas senior point guard Frank Mason III has put himself on the shortlist of candidates for national player of the year.

He's playing in one of the best stretches of his career, averaging 22.8 points, 5 assists and 3.5 rebounds through his first four Big 12 games. He's shooting 12-of-15 from behind the 3-point line in the past three games.

But there was a time when Mason wasn't considered to be one of the top players in the country. Sports Illustrated's Luke Winn wrote about Mason and Devonte' Graham this week, and one part of his story includes KU head coach Bill Self and assistant Kurtis Townsend discussing Mason's recruitment.

Self: “When Frank came out, was that the same year we were recruiting Cat Barber and Chris Jones?”

Townsend: “And Demetrius Jackson. Frank was kind of our fourth option.”

Self: “That left us really kind of—”

Townsend: “Scrambling. Then we were recruiting Jordan McLaughlin [for the following class], who ended up canceling our visit and committing to USC. But I went to see him [at the Adidas Fab 48] in Vegas; Frank was playing against him, and Frank kicked his ass.... I knew Frank’s AAU coach, Ty White, so I called him and asked, ‘Does that little dude with the braids play like that all the time?’ He said, ‘Every day, Coach. He don’t know no better.’ ... I went and saw him twice more, and each time he was good.”

Of course, back then, not many people predicted Mason would potentially outplay all of the players that spurned the Jayhawks during recruiting. Mason, a former Towson commit, was ranked much lower than the others.

Chris Jones ended up at Louisville, averaging 13.7 points and 3.6 assists during his senior season in 2014-15, while Jordan McLaughlin is averaging 14.5 points and 5.1 assists this year at USC.

Actually, in our KUsports.com archives, Mason's commitment wasn't met with a lot of joy. One commenter compared him to Royce Woolridge, who transferred after one season. Others preferred Karviar Shepherd, who committed to TCU and averages 5.9 points in his senior season, or Roddy Peters (played one season at Maryland and one season at South Florida).

When Self was asked last week how much improvement he's seen in Mason over the years, he responded: “He’s grown from being a guy who we thought could impact our program and be a good player for us in time to, in my opinion, a guy who has an unbelievable chance to be a first-team All-American, so that shows you the growth."

Glad I refrained from commenting on that article! Some of the comments are hilarious! I doubt Frank would have any actual interest in doing so, but I'm sure he would get a kick out of reading them...

And another just for nostalgia's sake.

Thanks for posting that. Yes, it's hindsight but it shows why big time coaches make big money and the rest of us write comments. And also that first comment you posted had 5 thumbs up! I bet most of those folks are glad it doesn't show their names.

I am so happy that the words that I offered came true. I was really in my feelings that day and when I look back at the things I said back then. I am glad to say now I told you so.

Last year at this time the Chicken Littles were piling on the Doug Gottleib manure wagon following his description of Mason and Graham as "mid major" guards.

Doug Gottleib is someone I listen to only when I need a good snickering. You'd think with the man's background he would show some actual intelligence. But I guess in his world the ability to flap lips is all that's required.

HEM argued so hard and especially long about the reliability of rankings and measurables.

Damn, that achieve brings back a lot of memories from not only the story but the comments, 161 of them! Very glad I did not make any comment.