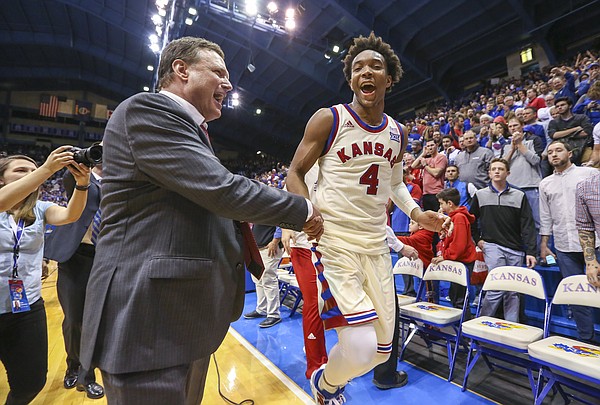 No one who stuck around for the entirety of the Kansas Jayhawks’ Big Monday showdown versus West Virginia could quite believe what they witnessed.

The No. 9-ranked Mountaineers let a 14-point lead with less than three minutes remaining in the second half slip from their grasps and the No. 3 Jayhawks happily took advantage, setting up an epic rally and 84-80 overtime victory that seemed just about impossible minutes earlier.

From Super Bowl comparisons, to bewilderment regarding the Mountaineers’ collapse, to giving KU credit for pulling it off, the college basketball world had plenty to say about the Kansas comeback.

Some famous Jayhawks who used to call Lawrence home had to hop on Twitter to let their followers and fans know about the victory, while a number of college basketball media members chimed in, as well.

Even a few of the players who helped pull off the unlikely victory shared some of their thoughts.

Below are the social media highlights from the aftermath of an absurd night at Allen Fieldhouse.

I don't care what yall think but Jayhawks fans best in the nation! So proud of my team!!!! Huuuuuggggeeeeee win!!!!!!

Don't worry y'all i'm about to get in the gym and shoot some free throws lol 😅 Big time win though. Thanks for sticking with us!!!!

This Kansas game is insane.. Anything is possible!!! #RockChalk

Had to catch it on the bus, so proud of these boys.. mannn that was crazy impressive! pic.twitter.com/8GrzS377vF

I be too nervous to tweet during the games but man ! Rock Chalk! And those people that left should never be allowed back in the building..!

That's why y'all don't leave the game ku fans lol

None by Chris Harris

BEWARE of THE PHOG!! Facts.

None by Brannen Greene

The shots of the Kansas fans pouring back in the building are priceless. Kansas cuts WVU lead to 71-69. 33 secs left. ESPN.

Incredible resilience by KU. Incredible meltdown by WVU. Watching both these teams makes me wonder why more teams don't press.

For those of you who turned off the Kansas game a couple minutes ago when West Virginia appeared to have it won, its now headed to OT.

Only thing worse than this loss for those West Virginia players will be their next film session. Huggs is going to let them have it.

WVU is walking back to Morgantown tonight.

Frank Mason does not believe in smiling.

Not the only reason they lost. But this is atrocious officiating https://t.co/9bV9xeWEIR

Simply the MAGIC of the PHOG! Kansas with a stunning comeback vs WVU / a happy Rock Chalk Jayhawk crowd ! @jksports @leefitting pic.twitter.com/osLWQQVfb9

.@KUHoops comeback wouldn't have happened without Bill Self's preparation & confidence in his team. It's a good arrogance earned w/practice.

None by CBS Sports CBB

Go home Doug Gottlieb, no one likes you.

I read a long time ago that Gottleib was not recruited by Kansas and has never got over that rejection. His anti-KU attitude is so obvious. I'm still scratching my head about his comment, trying to understand why stepping on the line while guarding the inbounds pass, while not legal, could cause a team to lose early in the NCAA Tournament.

Just read a little about Doug Gottleib on Wikipedia.He did his freshman year at Notre Dame. This is an excerpt from the article: "However, Gottlieb's stint at Notre Dame would be short. During Gottlieb's freshman year, he was charged with stealing credit cards from a roommate and two others and fraudulently charging over $900 to those cards; Gottlieb has since stated that, after paying back the $900, he was allowed to say he was leaving Notre Dame, in lieu of being expelled."

Gottlieb is a clown, has been a laughing stock in the eyes of KU fans since the game he played in AFH coming onto the court with his shorts on backward. The OSU players huddled around him so he could put them on right. I was there. All 16k fans laughed their butts off, he was humiliated. Just in case you want a hint as to why Gottlieb has such an anti-KU attitude. roflmao

Doug Gottlieb be trollin'. No respect.

Were there some missed calls? Yeah. But, did Kansas pull off a ridiculous comeback back making some ridiculous clutch plays? Yeah. Did WVU choke on multiple possessions in the last two and a half minutes of regulation? Yes. Did WVU foul KU on almost every KU possession leading to 44 KU FTAs? Yes.

Why does a guy (shooting ~50% FG on the year) shoot 3-13 from the field while making 16-18 FTs? Because of non-stop WVU fouls. Way to go officials! Thanks for actually calling fouls against WVU.

I mean, that specific inbounds play he's talking about was ridiculous, just like Frank doing the same thing in a game last year that KU won (the OU game?). Should have been called.

Maybe so, but it wasn't..... I get so sick of all the complaining about missed calls. Especially when you bring back something from a year ago. Did you watch this game? Did you happen to miss the multitude of foul calls against KU that were ticky tacky BS fouls that put us in foul trouble? I felt like the officiating evened out from tip to finish. At certain points in every game, the officiating will slide one way or the other. It's called the human element and when players are flying around and the ball is moving up and down the court, refs miss some things. I'm guessing you are a troll of some other team. Go high five some of those people about how good of a ref you are sitting in your chair at home.

Last night's performance was just simply amazing. I was one of the KU faithful that thought this team was going to lose: poor shooting, can't hit free throws, WVU was rollin, and can't stop WVU on the inside. This is how KU has lost in the past in the NCAA tournament. I am not sure what sparked the turnaround, although I did notice Graham asserted himself when the team need it. I suppose if you have 2 of the best players in the nation (Jackson and Mason), very good role players (Graham, Lucas, Svi, Vick), and budding players off the bench (Lightfoot and Colby), you have a fight chance to win, even on a poor shooting night. RCJH

At the point where WVU went up by 14 with 3 minutes to go, the green light came on for Graham. That kind of a comeback works because of clutch shooters in desperation playing like they have nothing to lose. When WVU went up 14 it felt like the game was over. That's when the comeback began. With nothing left to lose Graham lit it up. He sparked the team. Mason made a three. WVU got the jitters. The press turned them over, and all the momentum shifted back to KU.

Doug Gottlieb looks like a hairless rat. I don't understand how anyone can take anything he says seriously.

And I don't understand why networks keep him around. I rarely see any intelligent thought in his analysis, regardless of who the teams or players are. But, then, he's no longer with ESPN. I have to wonder who made that decision, did he "quit" or did they quit him? And I wonder how long CBS will keep him around. He wasn't that good a basketball player and he's gone downhill since then.

And how many of WVU's late fouls were intentional? No one can blame intentional fouls on the officials.